Earlier this week, our beloved campus paper produced a controversial list of endorsements. Lots of people thought the paper’s endorsements were stupid and so maybe didn’t make it until the end where the paper said you should vote against a $1 student fee for the Bike Kitchen (which will include an opt out option).

In order to examine the newspaper’s Very Good Reasons you shouldn’t give the Bike Kitchen any money, we’ve enlisted the help of “Time Machine Ubyssey,” the last survivor from the halcyon days of 2011 hackery. In March of that year, there was a big fee referendum on the ballot, which included raising The Ubyssey‘s student levy by $1—conveniently, the same amount that the Bike Kitchen is asking for now. Time Machine Ubyssey felt so strongly about that fee referendum, it published a full-page editorial on their cover urging students to vote in favour [Ed note: and then a lot of people whined about ‘journalistic integrity,’ because it would have been better if the paper pretended to be unbiased about wanting more money to do stuff and also YOU CAN’T USE THE FRONT PAGE LIKE THAT]. Obviously, their position hasn’t changed much over the past two years.

END_OF_DOCUMENT_TOKEN_TO_BE_REPLACED 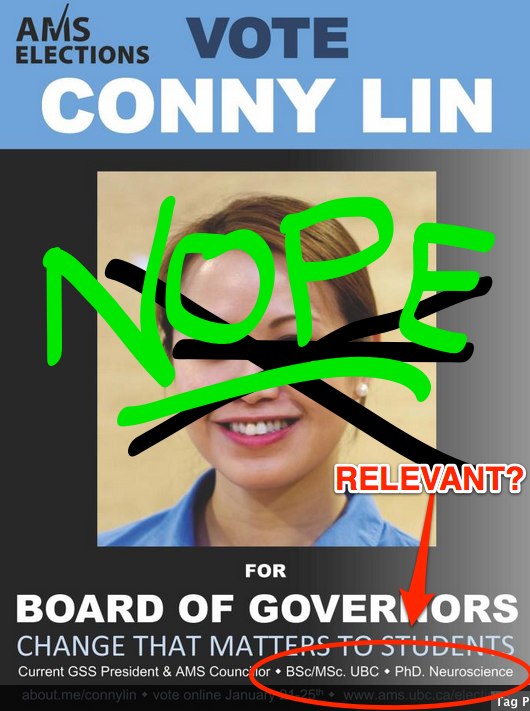 “Disendorsed” is a new feature we’ll be running throughout the elections season, and possibly onward as student politicans continue to fail and old hacks continue to make fun of their petty failures. Ain’t student involvement grand?

“jumping_jeff_flash” (he has gas? gas? gas?) tried to put up an AMA on the /r/ubc subreddit which managed to get a whopping 0 upvotes and 4 downvotes so far. ZERO upvotes? What the fuck? Reddit automatically awards one upvote (from the post’s authour) to every. single. submission. That means Jeff has managed remove the upvote on his own post. When you don’t think asking yourself questions is a worthwhile endeavour, what does that say about your candidacy?

Luckily for us all, he did answer the one question posted, “How do you pronounce your last name?” Now, when people ask “Who’s the guy whose platform consists of four meaningless and patronizing buzzwords?” [Jay Shah’s campaign would phrase it thusly: technology. integration. social. media.] you can respond knowingly with “Jeff. Jeff uh-bay-say-ker-ah” rather than just “uh, that Jeff guy, I think?”

Conclusion: As the kids would say, “fail.” DISENDORSED.