‘Soundings of Cetaceans’ [a Pilot Study for your consideration]

What follows is a few scrawls about the pilot study I will be conducting in Hartley Bay this summer. This is JUST the pilot study… my intention is to begin with a laboratory study and work outwards from there… Ultimately, I want to trace the dynamic interactions of other institutions, economies, and cosmologies to the happenings of the one I describe here. The enduring thread, as I see it now, is with cultures of sounding and listening; and how a ‘sonic materialism’ connects to political economy in the making of place. Your feedback is welcome! (Speaking of ‘welcomes’, ARTEMIA would like to announce that a new blogger is in the fold – Dawn Hoogeveen!…) 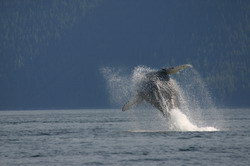 This pilot-study stages an ethnographic encounter with cetology (whale science) and the study of sound. Its aim is to reveal an ‘acoustemology’, a term coined by anthropologist Steven Feld to refer to the “local conditions of acoustic sensation, knowledge, and imagination embodied in culturally particular senses of place…” (Feld, 1996, 91; Feld, 2012). Acoustemologies allow researchers to consider how sound matters to everyday environments; rather than substitute for visualist approaches to knowledge, they encourage investigations which seek to understand how various senses combine to create spatial understanding. My project puts the concept to work at a whale research laboratory, Cetacea Lab, located on a remote island in Caamaano Sound, Northern, BC. Through a seven-week fieldwork residency (August- September 2012), I hope provoke thoughts on how broader knowledges relate to sustained acts of whale listening. In particular, I will pursue two questions 1. how work in acoustemology, hitherto focused on Indigenous encounters in the developing world, can be challenged and extended by an outdoor laboratory science setting, (Feld, 1996, 2003; Daniels, 2008; Maxwell, 2008; Ramnarine, 2009); 2. to understand how Cetacea Lab’s activities produce an acoustemology of Caamano Sound and its environs.

The central actors of the pilot study are the scientists who conduct Cetacea Lab’s activities. Since 2001, Cetacea Lab scientists have been monitoring whale activity through a network of radio-linked hydrophones, remote observation, and boat-based surveys. Every summer, their efforts are supplemented by two groups of volunteers (5-7 per group), who live at Cetacea Lab for 6-8 week periods (May-July; late July-September). These volunteers provide crucial support for the monitoring activities required during ‘peak’ times of cetacean activity: In late summer especially, Caamano Sound, and neighbouring Campania Sound and Whale Channel play host to an array of migratory and resident fin, humpback, and killer whales variously involved in annual mating, feeding, and socializing… (Ford et al, 1989, 2007). Hearing all the complex sonic activity generated by these creatures is perhaps the most pronounced feature of daily life at Cetacea Lab…

During my stay, I will be interested in assessing how cetology is done: how it is a performed activity. Among my guiding assumptions is the idea that cetology has many features which suggest it as a ‘nomad science’, a term coined by Gilles Deleuze and Felix Guattari (Deleuze and Guattari, 1987). As Pickering (2010) elaborates: “Royal science is finished science, cold, rigid, formalized and finalized… Nomad science is instead science in action, research science developing in unforeseeable ways — warm and lively, always liable to upset existing arrangements and to suggest new ones” (Pickering, 2010, x)… While cetology enjoys ‘royal’ status in universities and government laboratories, it is marked by internal tensions which have given rise to many ‘nomadic’ activities along its fringes (see: Burnett, 2012; for examples, see Lilly, 1960, 1967; Spong, 1969; McIntyre, 1974; Payne, 1995). Cetacea Lab suggests one good example: a small, non-profit lab headed by two ‘non-expert’ researchers (neither founding member has graduate level training in a scientific discipline) with stated interests in interspecies kinship and New Age intuition; reliant on volunteer work and local collaboration; conducting research marked by an evolving battery of methodological approaches. At the same time, Cetacea Lab engages in activities that place it squarely under the ambit of ‘royal’ science: seeking article publication in accredited journals, submitting evidence to government review panels, arguing for whale conservation strategies… One of my central concerns will be to evaluate how Cetacea Lab’s ‘nomadic’ features articulate with its ‘royal’ ones to shape the roles of listening and sound documentation as place-making forms of knowledge-construction.

To better understand how the question of acoustemology relates to Cetacea Lab, then, it is necessary to say a few more words about the discipline of cetology. In what follows, I briefly outline the two contact points that will direct my investigation…

Cetology as a sonic science

Whale science is unique among the biological sciences in its focus on sound. Certainly, this has much to do with the low-resolution watery medium in which its investigations are conducted… but the unique status of whales as “acoustic creatures” must be foregrounded (Burnett, 2012; Schwartz, 2012). Sonic focus is evinced through cetology’s reliance on one technology in particular: the hydrophone. These underwater microphones transform vibrations into signals that can subsequently be rendered into stereo, providing spatial relationships for human ears unable to locate sound-sources underwater (Hohler, 2003; Helmreich, 2006, 2010). Originally developed as military technologies for submarine travel, hydrophones made possible the ‘discovery’ of whale song in the 1950s (Burnett, 2012). The notion of that whales ‘sing’ gestures to a complementary facet of cetology’s sonic interest: this discipline is uniquely concerned with the voice as a vector of knowledge (for the classic study on whale song, see: Payne and McVay, 1971). Studies have argued for the acoustic diversity of whale clans (Ford 1987; 1989), regional groups (McDonald et a, 2007) and interspecies cultures (Noad, 2000; Whitehead and Rendell, 2001); suggested the importance of amplitude for mating displays (Chu and Harcourt, 1986); affirmed its affinities with Sonar technologies (Frazier and Mercado, 2003), and cybernetic models of knowledge (Bateson, 1972; Darling, 2006). While the echo-locative benefits of whale vocalizations are agreed upon by different schools of cetology, key disciplinary tensions persist around the different functions sound plays for whales in general.
…There is much to suggest the prominence of sound in shaping daily life at Cetacea Lab. Hydrophones broadcast sound continuously, and are actively attended to from 5am until midnight by rounds of volunteers. Sounds from all five hydrophones are fed into an audio mixer that enables the simultaneous monitoring of all stations. Three speakers are located within Cetacea Lab’s two buildings and two more lie along the connecting pathway; their combined effect saturates the lab and its environs with the continuous hiss, buzz, and (occasional) wail of underwater acoustic activity. In order to maintain a permanent record of all ‘acoustic encounters’ with cetaceans, and to aid in group identification during subsequent analysis, detected vocalizations are recorded digitally by volunteers from the moment of detection until approximately 20-minutes after the last vocal was heard. These activities are supplemented by an informal sightings network of local fishermen and ecotourism operators who report news over VHF radio, from visual monitoring efforts at the land-based research station, located on the south end of Gil island, and from the research out-camp, (Squally Point). 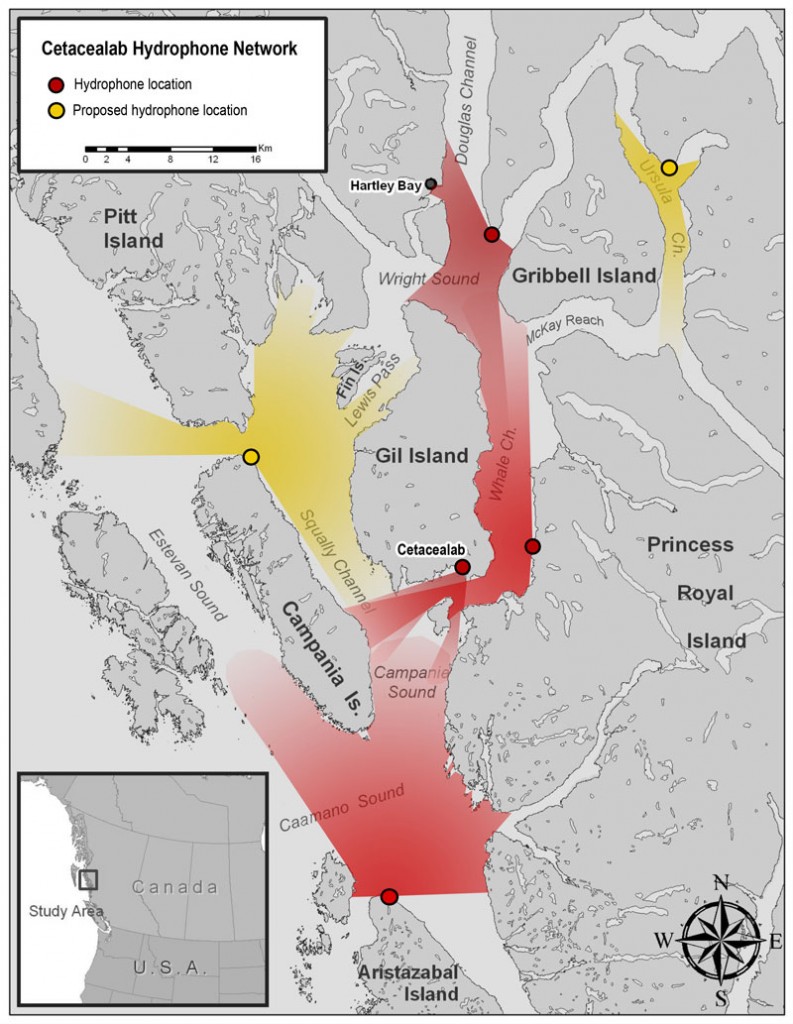 Cetology as a place making science

As its strong ties to oceanography and naval bioacoustics would suggest, cetology is intensely preoccupied with the geography of its field-engagements — evinced both by its efforts to map the habitats, mating grounds and migratory routes of cetaceans, and by the spatial requirements of its data-gathering infrastructures. Cetology produces place and is itself produced by place; its claims are dependent on the contingencies of whale proximity, the presence/absence of local actors (e.g. large boats); and the resonant features of underwater geologies. Cetology involves the production of networks of data-gathering hydrophones and remote base-camps; in invests in naturalistic observation, surveys, and the extensive mapping of underwater geographies and water-layers. Initial US military interest in cetaceans, a crucial funding source for post-war research efforts, owed largely to the military potentials of whale echolocation (Urick, 1983; Burnett, 2012). Sonar enables objects to be located, identified and tracked by means of those objects’ sonic emissions: Its development would open the ocean to new forms of spatial understanding, themselves shaped by new understandings of the ocean’s sonic qualities… (Shiga, 2012).
Cetacea Lab, established at Taylor Bight, on the southern end of Gil Island, in 2001… engages in various sorts of place-making scientific activities. Since its founding, the lab has conducted over 600 photo-identification-led marine surveys, recorded over three thousand hours of hydrophone activity, and totaled nearly two thousand hours of ‘dedicated searching” (visual observation) (NCCS Evidence, Pt. 1-3, 2012). Boat based efforts between 2004 to 2011 alone totaled 2,174 hours (including 1390 hours of dedicated surveys and 392 hours spent in opportunistic pursuit of Humpback Whale and Killer Whale sightings) (NCCS Evidence, Pt.2, 2012)… Since, 2006 Cetacealab has been collecting data to publish an Abundance paper on Humpback whales from Douglas Channel to Caamano Sound — research which suggests a marked increase in the number of humpbacks using the region as a summer feeding ground… 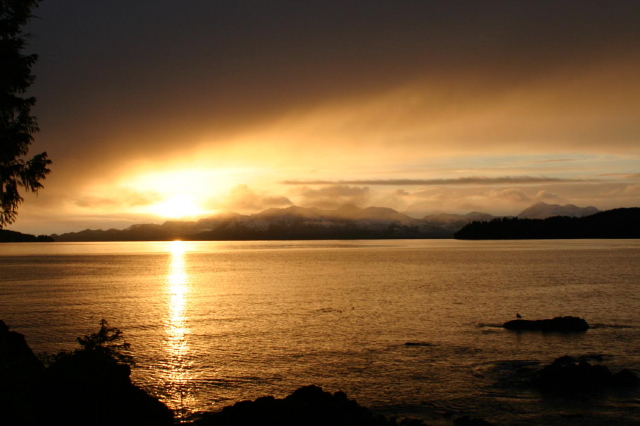 My pilot-study develops a multi-method approach centered on an ethnography of sound (by ‘ethnography’, I mean a combination of site-immersion, participant observation, and semi-structured interviews). Through my residency, I will relate my experiences as a whale listener and Cetacea Lab volunteer with those of the other volunteers and research scientists. These efforts will be supplemented by an archival study of knowledge production at Cetacea Lab — texts, recordings, surveys, blog entries etc. …While the literatures raised in my ‘background’ section will direct my subsequent research activities, my time at Cetacea Lab will immerse me in the everyday duties of a fully functioning lab, and it these activities that I chose to focus on in this study.

– To document the history and structure of the Cetacea Lab project, and to clarify the different parties that are involved in and contributing to it;
– To document how technologically-mediated sound (inc. whale vocalization) is broadcast, attended to, textualized, and enlisted in Cetacea Lab’s scientific projects (e.g. taxonomies of ‘mating call,’ ‘social,’ ‘bubble net feeding’ etc.)
– To examine — through participant observation, semi-structured interviews and personal reflection — how cultural appraisals of whale sound shape the production scientific knowledge at Cetacea Lab.
– To assess how the above three features articulate an acoustemology of Caamano Sound and its environs.

... and so on! I depart for my field-work July 24, taking the Port Hardy Ferry to Rupert and the Metlakata Express from there down the Hartley Bay. I’ll bring microphones, clothes, sun-tan lotion and Melville’s Billy Budd (read that other one). Despite such preparations and precautions, I expect only to be confused and unready upon arrival — the only way to be, some would say! Stay tuned for my special ARTEMIA installment, ‘Cetacea-Blog,’ to be initiated once I’m up there and have found my bearings…

This entry was posted in science, sound, whales. Bookmark the permalink.