One of the benefits of insignificance is that people rarely have reason to take shots at you. So when some fairly sharp criticisms were directed my way over my recent NMC Mashup Symposium mashup I really didn’t know how best to respond… I knew that something that weird would not appeal to everyone, and I had difficulty imagining a response that didn’t just seem defensive.

Then again, I’ve followed the work of both Jeffrey Keefer and Lisa Lane for some time, and when people I like and respect take the time to offer detailed and thoughtful critiques, it almost seems arrogant to ignore them. I also don’t doubt that other people have had similar responses to my stuff. So while I do not have the time to respond in appropriate depth to  the many shortcomings these posts identify, I did want to at least acknowledge them.

First off, mea culpas on a couple of crimes:

* Jeffrey is correct to point out that my abstract didn’t describe the session that I delivered all that accurately. I can only plead for mercy, as that abstract had to be submitted when I really didn’t know what I was going to do. I originally submitted a proposal that was a far more traditional examination of data mashups, but was asked by the NMC to consider something more culturally-oriented… So that abstract was something of a placeholder, and I do regret it if people felt misled.

* Lisa is absolutely right to smack me for not offering a more detailed list of sources anywhere. My only defense is that I did namecheck these people in the audio itself, which I conceptualized as a stand-alone piece. That, and I got lazy. I have updated my post and added the names of the spoken word samples.

Now if I may, I’d like to push back on a few other points. I don’t expect to convince Jeffrey, Lisa, or anyone else to change how they feel about the session, but I’d at least like to make my own motivations clear.

In his post (and previously on Twitter) Jeffrey complains that the session did not provide concrete steps on how to apply lessons learned in his own practice. First off, as I assembled the clips and materials that were most compelling to me, the narrative that emerged was one of mashup artists and sympathetic theorists describing their own histories, philosophies and goals in their own form of expression.  I hope I created a reasonable representation of a culture which has been influential on how we think about discourse in the digital age. If I failed at that, then I failed…

But I would hope there is room for discussion in our field that doesn’t have to boil down to universally applicable step-by-step instructions. Chris Lott, in a post that responded so well to Jeffrey that I felt like I was off the hook, makes this point very well: “there is a whole world of richness of expression and thought that ties into the way I live in and approach the world… and most of that world is in the dark, unseen and hard to quantify.”

I’m also reminded of Alan’s recent post contrasting fishing and fish nuggets: “it means less formal training, less workshops, and more learning by doing. It means using these tools a much as possible in our processes, so they become part of a fabric, not something strange and exotic.”

I have a couple of responses to Lisa’s assertions as  well. First, with regards to the respective natures of pre-literate, literate, and digital discourse, she may be right. But I never have asserted that digital culture simply rolls back the years to pre-literate  traditions. It’s possible that some of the samples in “Confessions” gave that impression, but just because I want to represent the positions of artistic and cultural thinkers does not mean I wholly endorse those views. I might be personally intrigued, even sympathetic to Negativland’s views on copyright, but I would never dream of advocating those positions to a room full of faculty that I hope will embrace an open education vision.

Lisa correctly infers the “Confessions” piece was a bit of theatre designed to provoke. So I am a bit confused why it would be judged by the standards of scholarship. Surely there is room in teaching and learning for storytelling, for sharing, for performance and provocation? Of course, that doesn’t mean she has to like it. And I don’t mean to suggest that good scholarship can’t be imbued with what Gardner Campbell calls “expectation and a sense of occasion.” (Gardner’s recent talk at UBC certainly shows that performance and scholarship are not mutually exclusive.) Maybe Lisa’s vision of the scholastic mashup will be a reality someday.

I should be clear that such strong criticisms to work that I’ve done, while they literally do cause me to lose sleep at night, are a preferable response to apathy. I honestly appreciate that Jeffrey and Lisa put thought into work that I did and that they would post such detailed appraisals.  I got next to no response to my much more deliberate (and carefully cited) mashup complement to last year’s EDUCAUSE Review article. I’ll admit that I was disappointed by the silence… maybe that pushed me to go a little weirder this time, and with more loose ends than some would like.  Personally, I find it more interesting when I am taking a risk with a presentation, and it’s natural that if you try for something ‘out there’ that it will not have universal appeal. I can only hope that there will be room for my own flavours being represented in this field, as I am having a blast working and playing here.

Before I move on, I wanted to note a hit of uncanny synchronicity that just blows my mind.  As I was preparing this post, I came across the following image from the “Confessions” presentation in Second Life in a post by Alan Levine: 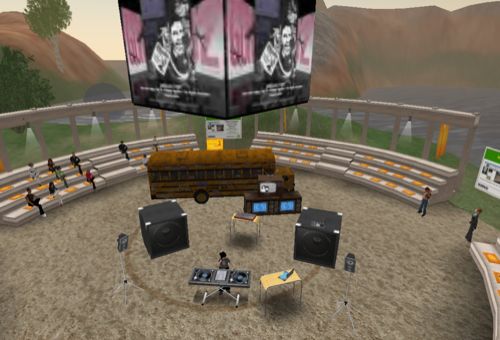 And I was absolutely stunned by the resemblance to the awe-inspiring opening shot from my absolute favorite concert film of all time, Pink Floyd Live at Pompeii:

Not intentional, I assure you. Had I grokked it, we would have had banks and banks of amps (preferably stenciled “PINK FLOYD LONDON”) to recreate the set exactly. With coincidences like this, I can take any amount of criticism.

The video is small and grainy, but you can get a sense of the Floyd’s unique performance here:

At the 6:04 mark of this clip you can see the exact moment I went from hating Pink Floyd to thinking of them as one of my favorite bands. The jam that follows is sublime…