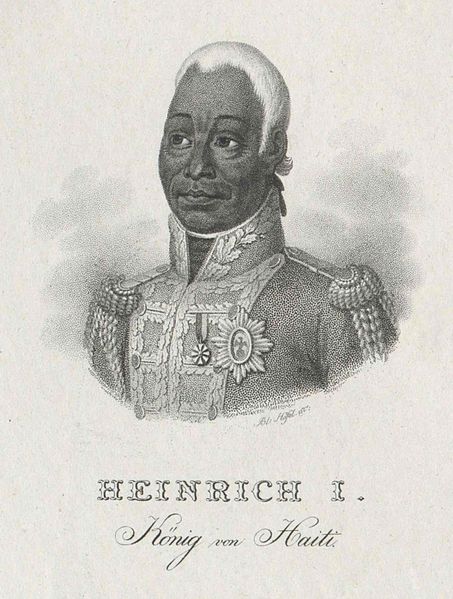 [In the Arts One group in which I’m teaching, this week we read two plays about King Henri Christophe of Haiti, one by Aimé Césaire called The Tragedy of King Christophe (mid 1960s) and one by Derek Walcott called King Christophe (1949)].

In class today I had planned to have us talk about the following in small groups after we did the larger group discussion, but when I looked at my watch I realized it was already too late! And since we only have one seminar discussion on these texts, I thought I’d use a blog post to make some observations/suggestions.

I’m on a bit of an “endings” kick the past couple of weeks. I was very intrigued by and somewhat puzzled by the ending of Alejo Carpentier’s The Kingdom of This World, as I wasn’t sure what to make of the fact that Ti Nöel is never heard from again, after his seeming epiphany and transformation into someone who seems like he’s now going to take action. I’m still working on that one (does he become the vulture in the last paragraph, flying towards the Böis Caiman, which is where Bouckman ralllied the slaves for the first battle of the revolution?).

So when thinking about these two plays together, I started thinking about comparing beginnings and endings. Comparing the beginnings didn’t get me that far (yes, of course, they’re very different, but I couldn’t really do much with that), but I found something interesting when I compared the endings. Both end the same place, with Henri’s death, which provides a nice even field for thinking about how they treat this event.

I’ll start with Scene five of the last Act (Act III), starting with p. 86. In this scene, several things struck me, including the discussion between Christophe and Hugonin at the beginning, when Christophe tells him, finally, that’s enough comic relief and Hugonin speaks about the reality as compared to Christophe’s hopes, thus leading Christophe to note that Hugonin’s words are “weighed down with the wreckage of my dreams” (87). I’m still working on what I think of Hugonin as a character, what his role in the play is, but here he is definitely able to use his position to speak the truth (or close to it) plainly to Christophe. I think he may do so in more veiled ways earlier in the play, but I haven’t looked all the way through yet to verify this.

But what I want to focus on in this scene is something else. Christophe, towards the end of the scene, tries to rally his troops, tries to follow the proverb that says “When you see an arrow that’s not going to miss you, throw out your chest and meet it head on” (88). He stands up and talks about how he can still fight, how they are all scared of him, how the enemy’s army is riffraff, etc. It seems like it’s going to be a kind of rousing, hero’s end … but then he falls just as he shouts for them to move forward… and blames someone else (“Who did that?”) (90). An unreal apparition of Boyer appears and describes how people are rightly deserting Christophe for his treatment of them, and the soldiers desert.

This, to me, is an image of Christophe in miniature, in a way, of him attempting to move boldly forward, to engage in heroic deeds for his people, but then failing because of the way he treats them in order to try to mould them, shape them into something great (a theme in Césaire’s play). They desert him, and he falls. His death, in this context, could be read as a lonely, cowardly one, hiding away. His last words: “I’ll attend to the rest alone” (90).

Then, of course, there’s the scene with Hugonin giving a “minute of silence” before we hear the shot. He announces at the end that he is “Sometimes addressed as Baron Saturday” (93), which I had to look up. Baron Samedi is a Voudou spirit, specifically the spirit of the dead. He is usually portrayed in a black tuxedo and top hat, and he has a fondness for tobacco and rum. He is, apparently, well known for bad behaviour including debauchery, swearing, making filthy jokes, and drinking too much. So that explains why he appears as he does in this scene. Whether we are to take Hugonin as an image of Baron Samedi throughout the play I don’t know.

Lastly, then, there is the burial of Christophe in mortar on a mountain, which I think we can take as the construction site of the citadel, but I’m not certain. Much is made of him being erect, standing up, not lying down–as he wanted Haiti to do. And he gets to continue to do for a very long time, becoming one with the stone, as Carpentier notes in his novel. He will eventually turn to dust, but he is more solid and enduring this way than he would be if just buried in the dirt.

This ending is much more focused on images of dust and ruin, of impermanence, weakness, oblivion than the one in Césaire’s play. The beginning of the end could be said to be after Christophe kills Brelle; right afterwards he begins to hear the drums, leading him to recognize his coming doom: “What drums are those?/ They are coming nearer./ Oh, Vastey, my dreams … / Ruin, ruin, O King, ruin and blood!” (95). And from there he quickly becomes paralyzed, cannot move his legs.

In Césaire’s play he’s paralyzed too, of course (and apparently Christophe did have a stroke that left him partially paralyzed), but he still seems to rally towards the end, to try to stand up resistant, rouse his troops, etc. Of course, it doesn’t work, but he tries. In Walcott’s play he seems weak, seems to have submitted to his fall without much of a fight. Unlike Vastey he doesn’t regret anything, but doesn’t really stand up, literally or figuratively. He gets “half upright” on p. 106, and then “sinks in the chair, beaten, but alert.”

Vastey speaks of the citadel as already falling into ruins, and of “dust on the mirrors, floors cracking” in his own rooms (99). And he speaks to Henri of how death erases the complexion, makes us the same: “In death, Henri, the bone is anonymous;/ Complexions only grin above the skeleton” (101). This reminds me of the gravediggers scene in Hamlet, in which Hamlet speaks of similar things. And of course, Henri himself addresses a skull at the end (like Hamlet does), pointing out that while alive, “Time like a pulse was knocking in the eyelid” — death is always there, waiting, decay and ruin (106).

Christophe wonders what he will leave behind besides an anonymous skull; “A king’s memory, or oblivion” (107). His last words suggest oblivion, perhaps, rather than a king’s memory: “And after that …/ Oblivion and silence” (107). (Hamlet’s last words: “The rest is silence.”)

And that’s it; no burial in stone, no memorial, no nothing. Just dust, ruin, oblivion and silence. This one seems to emphasize impermanence, decay, dust and ruin, at least in the ending, than Césaire’s does.

Well, I won’t go further in trying to make something of this, because to do so I’d have to do close readings of many more passages from each play, and this post is very long already. But I found this difference interesting, and it made me think further about the emphasis on time as an enemy in Walcott’s play (Sylla, p. 34; Christophe, p. 84), and the emphasis on history “burning biographies like rubbish,” which is said twice (100, 106).

Césaire, Walcott and Henri Christophe / You're the Teacher by Christina Hendricks is licensed under a Creative Commons Attribution 4.0 CC BY