The Hidden Benefits of Being Bilingual

Posted on November 16, 2015 by Ravjot Ahluwalia | Leave a comment

Have you grown up speaking a language other than English with your family? Well, you are one of many millions of bilingual or multilingual people worldwide. In the United States alone, one-fifth of the population over the age of five reportedly speaks a language other than English at home. Language is an incredibly important tool used to communicate with others, identify with our culture and to understand the world we live in. As a result, we are well aware that being able to speak different languages can be very useful when travelling. Additionally, there are many cognitive benefits associated with being bilingual or multilingual compared to simply being monolingual. Bonjour by David via Wikimedia Commons

First, it is important to understand the mechanism behind language acquisition.The brain is split into two hemispheres, with the left hemisphere being dominant. It is responsible for analytical processes and reasoning, whereas, the right hemisphere is responsible for emotional and social processes. Learning a new language requires processes from both hemispheres; however, aging leads to lateralization, meaning the hemispheres begin to differ in function. This gives rise to the critical period hypothesis, which suggests that children learn new languages very easily due to the neuroplasticity, reorganization of the brain using fast connections between brain cells known as neurons, their developing brains. This allows them to use both hemispheres of their brain when acquiring a new language, whereas, adults are only able to use their left hemisphere. This is why children, generally, are able to learn languages much faster than adults or even youth. Studies show that, in comparison to monolingual people, bilingual people are more cognitively inclined. Firstly, bilingual people have increased activation in brain regions associated with attention. Secondly, they have better cognitive control when switching between tasks quickly, which also leads to increased multitasking ability. Thirdly, they have increased skills in focusing on relevant information and getting rid of irrelevant information. Fourthly, they have improved memory due to memorizing the rules and vocabulary of other languages. Fifthly, they tend to make better decisions. Lastly, they are more aware of language, meaning they a better grasp on grammar and become more effective communicators because of this. No matter how old you are, learning a new language can improve your cognitive ability in numerous ways. So, if the only thing between you and that perfect vacation destination is not knowing that country’s language, now is the perfect time to learn!

To learn about more benefits, watch this video: 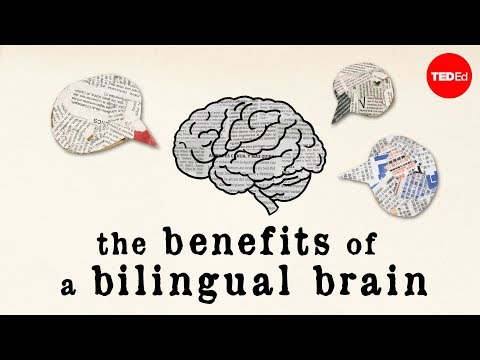