We went to Canada yesterday, where I got to run with the Torch.

Ready
When I found out I’d won a spot in the Vancouver 2010 Olympic Winter Games Torch Relay, all I knew was my segment was on day 100, somewhere between Whistler and Merritt British Columbia. Folks familiar with the area would know that’s a route that covers over 300km—one of the longest road segments in the entire relay. Then in mid-December I learnt my segment was in Logan Lake.

Logan Lake is Canada. It’s a small community compared to Vancouver (about 3,000 people), largely reliant on the resource sector for its economy (a copper mine). It’s the kind of place everybody knows everybody. “Downtown” is a cluster of shops, restaurants, the post office and the community recreation centre. It’s at this last building we were to meet the folks from Vanoc. The “rec” centre was also to be the site of the community celebration prior to our run.

For a small town, Logan Lake’s got a big rec centre —mostly to accommodate what looked like an international size (30m x 60m) ice rink. The hallways and rafters show the mark of pride this town has for its hockey: banners, trophies, photos, things of that sort. Go down the hallway and you’ll find 3 sheets for curling (dark tonight), a gym ($3 drop-in fee), and the offices of the folks who work there. Ten minutes in the building and it was clear to me: this centre is probably very much the centre of the community of Logan Lake.

Set
I was the first torchbearer to arrive, but the local host committee was already on top of things. Over the course of several hours they arranged a small stage, a table to buy souvenirs of day (I got 5 pins and a tuque), and had begin deploying thousands of paper lanterns to mark the torch route. I got into my torchbearer’s uniform and started mingling: these folks had done a lot of work and it seemed only fair to get to know them a bit. Everyone was friendly; lots of folks wanted photos. My favourite was the group of stoned 15 year old guys (they reeked), one of whom rested his head on my shoulder like a little puppy!

Kim, our host from Vanoc, was lovely. She communicated all the important information succinctly, showed how to hold our torches. Oh, and she gave us each our torch—me my torch! First impressions? Beautiful, heavy, and heavy. With a full fuel canister they weight 1.7kg. My only concern has always been big torch, leprechaun hands (I wear women’s small gloves usually). Our red mittens have a textured grip in the palms, but it was still a stretch to hold it in my hand. But it was gonna be fine…and I was gonna carry it in my teeth if I had to.

With our torches we returned to the crowd so folks could get photos. Lots of photos. Photos, photos, and photos. And then photos. Then, after a few photos we boarded our shuttle bus. Each of us roared for the others as we were dropped off. Soon I was standing on the side of the road, chatting with a couple whose daughter had just graduated from SFU and who lived in Langley. Like most parents whose kids are away, when I asked how often they got to see her they said “not nearly enough.”

I was runner #2 (well, my assigned number is 100-084, the 84th runner on day 100), so I could see and hear the community celebration. Soon we were singing “O Canada,” which brought the first tears of the day. On cue, when we got to “we see thee rise, the true North, strong and free” fireworks were launched. After we finished singing we knew the first runner had started because more fireworks were going off. This. Is. Happening. The large RBC and Coke trucks (they knew my name) were a bit of a giveaway too.

Go
While chatting away, out of the twilight comes an RCMP officer on a mountain bike. Which means he’s going to turn on the fuel in my torch. Which means it’s very nearly my turn. And sure enough I can see torchbearer 100-083 slowly making his way towards me. Or perhaps not that slowly. The RCMP fella gently tugs my arm so I’m in position for the “kiss”—the moment when we raise our torches to one another so his passes the flame to mine. The very flame that was lit in Olympia Greece on 22 October.

We kiss and I’m off! People are cheering from both sides of the road, but I’m paying attention to what’s in front me. My segment is a bit twisty and bit uphill, starting at the local RCMP detachment and continuing past several homes. In front of me is a massive truck with floodlight—the media truck where the live webstream is coming from. My former Vanoc colleague Denyse is the social media person for the Relay; I shout hello to her in case she can hear/see me.

One way to put this in perspective: 1.7kg is a decent sized roast beef. So I’m running with a long, thin, flaming roast in the twilight, slightly up a hill. I am perhaps the most uncoordinated person I know and pretty soon my leprechaun right hand is aching, so I switch the torch (carefully) to my left. And then back to my right. And then back to my left. Somewhere along the route Max has my video camera mounted on a tripod. Vanity thy name is John: I’ve decided not to wear my glasses, so every time I see what is perhaps a tripod I’m squinting in case it’s him.

I now see 100-085, the only local running today. And I see Max. And I see my segments coming to an end. “OK slow down to a walk” one of the RCMP escorts advises; that’s fine by me. And now I’m kissing the next fella, we high-five, and he’s off. The RCMP mountain biker is waiting and comes to turn off my flame—but graciously waits so I can visit Max. The flame in my torch slowly dies out.

The finish line
The pick up shuttle is there in an instant, so I hop on board. First order of business is to remove the fuel canister and disable the fuel line (“It’s an Olympic torch, not a barbecue lighter” I remember Kim saying). As each of us is picked up, there’s a cheers and applause and we’re all happily chattering away. The last runner—a Paralympian—gets the biggest cheer, since he was dropped off from an empty bus before he ran.

We’re given boxes and tote bags for our torches, then we’re dropped back at the rec centre. The crowd is much smaller than before the torch, so the photo taking is relatively brief. I make a point of finding Elaine, the woman who organized all this (like a deer in the headlights I can’t recall her name).

“Would you like a photo of yourself holding it?”

“Absolutely—you’ve earned it. Thank you so much for making was already going to be a great experience even more special.”

Instant replay
So that’s sort of what happened during my torch run: most folks want to know how was it? It was…amazing. I was a bit nervous when we arrived at the rec centre, but once I put on my uniform and had my torch, I felt awesome. I was on the verge of happy, happy tears for much of my run. I was very much be in the moment. And I could sort of see everyone watching it all via the webstream. Before it began I was afraid it would be too short. Once I got going I was afraid it was gonna too long. It ended when it was supposed to. It was perfect.

I loved that all the attention at the celebration wasn’t really about me: it was about the Games, about this community, and about Canada. A couple of years ago a gamer (someone who works multiple Olympic games) said “just you wait…when the relay starts it’ll feel real—across Canada.” So I’ve been following the torch on its journey around this wonderful country of ours.

Many folks watched the segment via the live stream. A couple of colleagues from work captured it and loaded the video up on Youtube:

I set up my laptop to capture the stream in our hotel—and it largely worked. That footage, combined with what Max shot, is here: 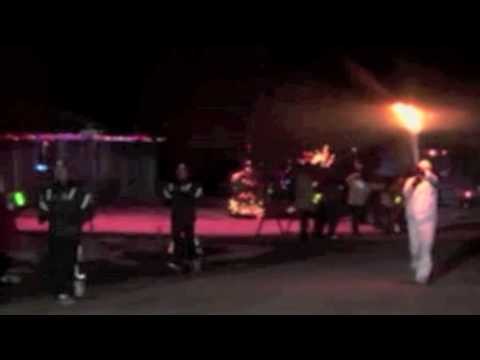