hacking for a better world

You might not be aware of it, but you’ve heard of Anonymous. No, not Alcoholics Anonymous: this band of people are hackers who take collective action against organizations whose practices they find objectionable. After the hegemonic slamming of Wikileaks a few months ago, Anonymous and its supported brought down Visa‘s Mastercard‘s and PayPal‘s websites (each of which disabled donations to Wikileaks after mounting international pressure). A pretty compelling act, regardless of one’s take on Wikileaks or Julian Assange, who has larger fish to fry at the moment.

We queer folk have had to live with a hateful “religious” group from Kansas since the early 1990s. Westboro Baptist Church is, in reality, the extended clan of one elderly man. In raw numbers they’re nothing really, but they’ve made it their business to vilify queers aggressively. Which, for the most part, mainstream society met with a shrug. Even when they picketed outside the funeral of Matthew Shephard, a young gay men tortured to death in Wyoming, with charming signs like “Matthew is burning in hell” and “no fags in heaven” and “fags die god laughs” the reaction was rather mute–though more people became aware of Westboro as a result.

Until the wars in Afghanistan and Iraq and the accompanying casualties among US military personnel. Westboro sees the entire US (and Canada, btw) as evil. And the death of US soldiers as proof that “god hates America. ” Westboro began their picketing of military funerals, this time with signs like “god hates fag enablers,” “thank god for dead soldier,” “fag troops,” and “god blew up the shuttle” (the last one…really?). All of a sudden Westboro were front page news and a groundswell of public reaction lead to blockades of their picket lines (folks dressed up as angels, some bikers too). Since then from time to time Westboro does something outrageous and gets on the news again.

Recently a spoof threat against Westboro and their lovely website was made by persons claiming to be members of Anonymous. Westboro responded “bring it.” The real Anonymous said “nope, wasn’t us.” But like a dog with a bone, Westboro couldn’t let go.

And now Anonymous has “brung it.” Denial of service attacks. Apparently they’ve done whilst one of the Westboro hatemongers was being interview on TV: 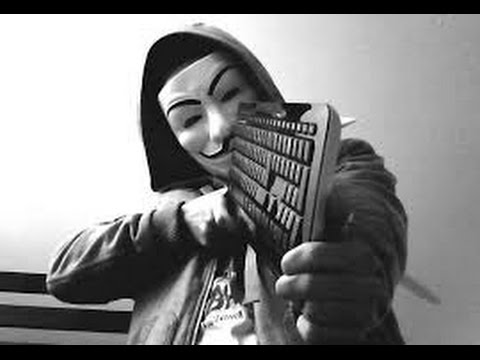