Posted on September 14, 2011 by Jennifer Stieda 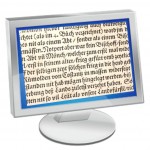 This quote comes from a paper I came across while I was researching Richard Mayer’s principles of multimedia learning (Mayer, 2001).  The title caught my attention because it seemed to encompass a couple of my interests:  “Multimedia Learning Gets Medieval.”  In the paper, Tara Williams describes her search for ways to use technology to help her students find a deeper connection to medieval life and literature.

“It is not only the language in which medieval texts were written that distances them from the present day, however; the process by which those texts were produced also differs radically.  Scholars often correlate the end of the Middle Ages with the development of the printing press, a signal of how critical the transition from manuscript to print culture was.  The difference between a time period during which a privileged few owned prohibitively expensive, hand-produced manuscripts and one that includes Amazon.com and Oprah’s Book Club is a difference that teachers need to address in the classroom precisely because the manuscript culture shaped the medieval experience of reading and writing so fundamentally.  This culture is chiefly responsible for several vital characteristics of medieval literary practice that I will discuss in more detail below:  that medieval readers valued retellings of well-known stories above completely original ones (which were a risker investment), that medieval reading was a shared and oral event, and that texts were expected to offer some sort of moral or religious value rather than pure entertainment.  If each bestseller cost a year’s salary or more, our current literatary values and tastes would likely shift as well” (Williams, 2009).

I think this paragraph ties in with what we have been talking about in several ways.  The importance of the printing press in changing the literary landscape is highlighted while at the same time noting the heavy influence of an oral past.  The last sentence also points to how the production of written text influenced its content.  I often wonder what parts of history we are missing simply because no one wrote it down or only wrote down what they thought was important.  Perhaps some small detail omitted would completely change our perception of a particular historical event.