A Brief History of the Pen and Paper 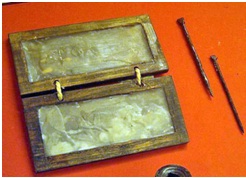 Writing with pen and paper can be traced back to Greece where writers used a stylus made of metal, bone or ivory (Bellis, 2011). These were used on beeswax wax-coated tablets made of wood. Writing was engraved into the wax and erasing involved using the spatula-like end of the stylus to carve and remove sections of writing.  Erasing the entire tablet for reuse meant heating it to a certain temperature and smoothing the wax surface.  The expressions ‘wiping the slate clean’ and ‘a clean slate’ date back to this ancient process (Bellis, 2011).

While there are earlier examples of writing with a stylus, such as the Chinese oracle bone script dating back more than 1000 years BC, the wax tablet bears the closest resemblance to writing with pen and paper (Bellis, 2011).  Sumerians also used similar tablets.  However, these were made of clay and required heating to maintain the writing’s permanency.

Ink used for the purpose of writing dates back to 18th century China with ingredients that included a combination of plant, animal and mineral material. Around the 4th century BC, India Ink was developed in China (called India Ink because of the origin of the materials used) with a combination of tar, resin and burnt bones (Lindblad, 1996).  Writers used the ink with a wet brush.  Using similar technology, Chinese writers also used ink-sticks which were solid until ground in a small amount of water.  Ink sticks allowed writers to adjust the thickness of their writing.

Brought about in around 700 AD, the quill pen was used for well over 1000 years before new writing technologies were introduced.  The highest quality quills came from left wing feathers of live birds (Conner, 2005).   They only lasted about a week and required constant sharpening with a pen knife.

It was not until the early part of the 19th century that pens begin to evolve into a manufactured commodity (Conner, 2005).  The inexpensive and readily available steel dip point developed at this time would fit into a holder and could be dipped into an inkwell.  The point’s holds and folds would pool the ink for writing.  Quills often stained writers’ hands and clothes which prompted the introduction of the fountain pen – a writing implement that contained an internal reservoir that would release ink as a writer wrote.  Mass production of fountain pens began in the 1880s and since that time, pens have seen steady improvement. 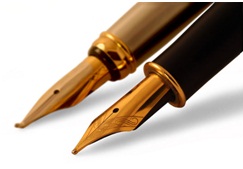 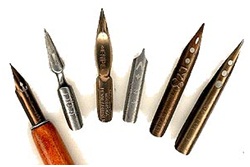 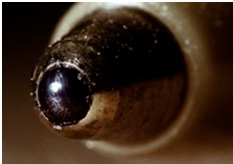 Image 5: The Tip of a Ballpoint Pen

The ballpoint pen went through a series of failed prototypes before becoming the most ubiquitous writing instrument in the world.  First invented in 1888 by a leather maker called John J. Loud, it was not sufficiently improved and officially patented until 1938 by Laszlo Biro (Conner, 2005).  A tiny ball within a socket at the tip of the pen rotates as the pen moves thereby picking up ink and leaving ink on a surface as the pen moves. The fact that they are cheap, readily available and disposable has made them the most popular writing implement to date (Conner, 2005). 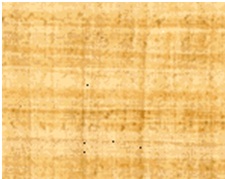 At nearly the same time that ink became more widely used, paper was introduced.  Prior to paper, papyrus and parchment were commonly used writing surfaces.  Papyrus was made from the cyperus plant where strips were cut, dampened and pressed together with the plant’s glue-like sap and first appeared in ancient Egypt (Bellis, 2011). Parchment, on the other hand, was made from treated and stretched animal skin and became commonly used by the 5th century BC.  Paper was developed in China and while its exact origins are not known, the first recorded papermaking process dates back to 105AD.  The process involved soaking and beating plant fibres, then straining them through a sieve to dry within a wooden frame (Bellis, 2011). 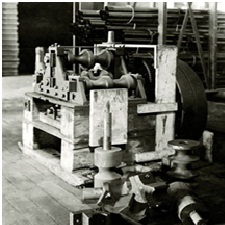 Water-powered paper mills became the next main source of paper around the 1300s using recycled textiles.  The mass production of paper began in the early 19th century with the advent of the steam powered paper mill.  These mills used fibres from wood pulp to produce massive rolls of paper.  The paper mill made it possible to produce sheets of paper at 30 feet wide at a rate of 60 feet per minute (Robert C. William Paper Museum, 2006).  The same period of time saw the advent of the steam powered printing press and the mass production of pencils and fountain pens.  These innovations in conjunction with wood based paper making created a cultural and economic shift among industrialized nations that had tremendous implications for education and literacy.

The Impact of the Pen and Paper on Education and Literacy

Image 8: Faces of the Industrial Revolution

It was with the development of the steel dip point and the fountain pen that we see an expansion of education and literacy worldwide.  This has been especially true of the Western world and I believe there is a direct link between the mass production of pens and paper to literacy and the rise of compulsory education (the last of which I will discuss further below).  The Age of Enlightenment that took place in the 18th century was an intellectual movement that sought to advance knowledge (especially the sciences) and establish a system of ethics, and aesthetics (Foster, 2008).  It was this movement – spread rapidly by the use of pens and paper – that helped bring about the application of scientific knowledge and the subsequent industrial revolution in Europe.  Pens and paper were massively expanded during the Industrial Revolution.  It was also during this period that the number of educated people (especially in Europe) rose further.  The mass production of pens and paper made them less expensive and more readily available.  As a result, the tradition of the Age of Enlightenment continued with the spread of ideas and modern views. The development of pens and paper enabled this to take place with greater ease and speed, thus increasing the number of educated people dramatically (Daunton, 1995).

The mass production of pens and paper has lead to a number of innovations that we could quite simply not live without today.  Up until the digital age, the use pens or other witting implements was a daily occurrence. Furthermore, what would we do without toilet paper, tissues, money, cheques, clothing, boxes, cups, newspapers, magazines, notebooks and of course, books!  Had we still been using papyrus and parchment, would we have seen the massive cultural, economic, political and educational changes over the past few centuries?  This is a difficult question to answer but it is worth exploring. 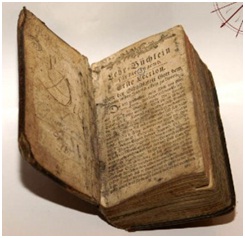 Books have played an impressive and key role in the dissemination of knowledge.  The relative ease with which paper was mass produced in the 19th century – coupled with the advent of print technologies such as the steam powered printing press, monotype and linotype – lead to the mass production of books.  Books soon became far less expensive than handwritten manuscripts making them more readily available to all walks of society (Daunton, 1995).

It is during this time that we begin to see the development of compulsory education and mass schooling.  Many cultural, political and economic factors lead to this trend in education and are too broad to go into any kind of detail here.  The main reason, at least for Canada, was the need to educate a rising generation of citizens, especially the ever increasing immigrant population (The Canadian Encyclopedia, 2011).

Most of my discussion here has been about the role of the pen and paper and their implications on literacy and education in industrialized, developed nations.  As I bring this discussion to a close, I think it is important to note the implications of these technologies on the developing world, for which literature and research is lacking.  UNESCO’s (2008) statistics indicate that literacy rates are lowest among many of the world’s poorest nations (namely in sub-Saharan Africa).  The production of pens and paper is highly resource and labour intensive.  A country that cannot afford to produce or buy pens and books to educate and improve the literacy of their population quite simply go without.  And this trend shows little sign of changing: “Whilst there have been substantial gains in East Asia and especially China, the Arab States, Bangladesh and Sub-Saharan Africa are lagging behind” (UNESCO, 2008).

Ayiter, E. (2011). The History of Visual Communication.  Retrieved from http://www.citrinitas.com/history_of_viscom/press.html

Conner, R. C. (2005).  Penspotters: A History of the pen.  Retrieved from http://www.rickconner.net/penspotters/history.html

Frost, M.  (2008). The Age Of Enlightenment.  Retrieved from http://www.martinfrost.ws/htmlfiles/enlightenment_age.html.

The Canadian Encyclopedia (2011). The History of Education. Retrieved from http://www.thecanadianencyclopedia.com/index.cfm?PgNm=TCE&Params=A1ARTA0002538

[Untitled photograph of a beeswax tablet]. Retrieved October 23, 2011 from: http://www.sodahead.com/united-states/what-is-a-tablet-anyway/blog-233041/

[Untitled photograph of an old book]. Retrieved October 23, 2011 from: http://diceofdoom.com/blog/2010/09/how-to-care-for-your-roleplaying-books/

Wisconcin Paper Council (2004). The Invention of Paper.  Retrieved from http://www.wipapercouncil.org/invention.htm

This entry was posted in Research Paper and tagged paper, pen. Bookmark the permalink.