The Influence of Text Technologies on Politics

Text has influenced society’s political landscape throughout history. To describe this affect of text, Bulwer-Lytton (1839) in his play decreed, “The pen is mightier than the sword” (p 52). Text and how text is disseminated continues to influence politics as the technologies of text continue to change in the 21st century.  Today’s text technologies are proving to be mightier than the sword.

Text has been viewed in a variety of spaces over the past two millennia using the technologies of the scroll, the codex, the moveable type printing press and digital media.  With each remediation of text there was a change in the technology of the text tools (Bolter, 2001; Roberts & Skeat, 1983). The changes in the text technologies alone did not change the political and religious landscapes but were an instrumental factor in the development of society and culture. As Bolter (2001) describes, “ It is probably best to understand all technologies in this way; technologies do not determine the course of culture or society, because they are not separate agents that can act on culture from the outside” (p 19). 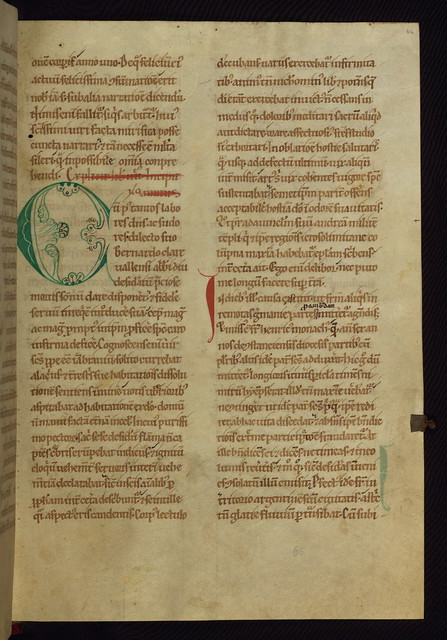 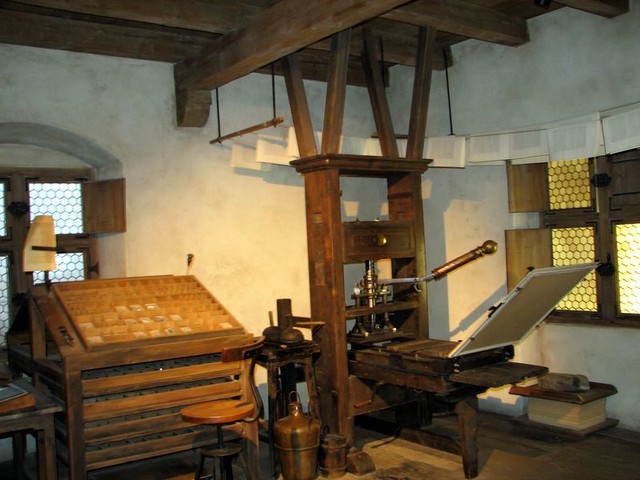 A second example in history of the influence of text in politics is Johann Gutenberg’s development of the moveable type printing press. Gutenberg did not know that his invention would lead to the decentralized authority of the Christian religion (Edwards, 1994, p7). The bibles created using this technology took less time to produce and many more people were able to own their own bible. “The advent of the printing press in the fifteenth century resulted in books becoming more widely available to the general populace” (Weise, 2004, p 8). The personal interaction with the text allowed individuals to become their own theologian and rely less on Church authority to interpret the religious texts (Edwards, 1994, p 7).

A replica of Luther's 95 Theses by Keren

A second auxiliary factor of the technology of the moveable type printing press was that Martin Luther’s Ninety Five Theses and subsequent writings were quickly disseminated throughout Europe to help spread the Reformation (Edwards, 1994, p 7). “[The moveable type printing press] broadcast the subversive messages with a rapidity that had been impossible before its invention” (Edwards, 1994, p 7). Luther’s ideas spread quickly and were able to find like minded individuals. “The Reformation saw the first major self conscious attempt to use the recently invented printing press to shape and channel a mass movement” (Edwards, 1994, p.1).

These historic examples in the changes of the text technologies have demonstrated that text and the form of that text have influenced the political landscape in societies. More recently, there has been another conscious attempt to shape and channel mass movements using today’s digital text technologies.

In the late 20th century a graphic user interface (GUI) was developed for the Internet. This GUI development changed the way individuals interact with their computer in two significant ways. The first significant change is that the GUI made the computer experience “more familiar, inviting, effortless and interesting for people to use” (Bolter, 2001, p 68).  A second significant change by having a GUI is that the Internet became an interactive space of sharing text with each other.  As Shirky describes in his book, “Human beings are social creatures – not occasionally or by accident but always” (Shirky, 2009). Therefore the number of Internet users increased dramatically alongside the development of social media. In 2010, Statistics Canada reported that 80% of individuals aged 16 years and older used the Internet for personal use.  (Statistics Canada, 2010)

As the use of the Internet increased and the number of interactive Internet spaces increased, Aaron Smith of the Pew Internet and American Life Project reports that the “online political experience was qualitatively different this year (2008) than it was in 2000, 2004, and 2006” (Smith, 2009, p.20). Digital spaces of text in the 21st Century are being utilized to shape and channel mass movements just as the text technology of the printing press was utilized in the 15th Century. As a result, “The study of social media is becoming a subject of increasing importance for political science” (Faris, 2010).

One of the first large scale examples of the use of social media to shape and channel mass movements is the United States Presidential Campaign of 2008. Smith (2009) in his study The Internet’s Role in Campaign 2008 discovered that 55% of the entire United States voting age population used the Internet to join the political process (p.3). This was double the population who used the Internet to join the political process in the 2000 elections (Smith, 2009, p.4).  Smith explains that “many social media features that were in their infancy during the previous presidential race had become commonplace by 2008” (Smith, 2009, p.20). The study found that those who used the Internet “used a wide range of digital tools and technologies to get involved in the race, to harness their creativity in support of their chosen candidate, and to join forces with others who shared the same political goals and interests” (Smith, 2009, p.21). These tools include Facebook, YouTube, MySpace, Twitter and Political Party Web Sites. Smith continued this research and in his report The Internet and Campaign 2010 echoed the findings of his earlier report. He found during the mid-term elections 54% of all the United States voting population used the Internet to join the political process (Smith, 2011, p.2). He describes that, “These sites have emerged as a key part of the political landscape” (Smith, 2011, p.2)

The winner of the 2008 Presidential Election was the Democratic candidate Barack Obama. Although the Democratic candidate Howard Dean has been credited with pioneering the use of the Internet for fundraising and campaign organization in the 2004 primaries, as Kaid describes in her article, “Most observers of the 2008 campaign agree that the Obama campaign’s use of the Internet was key to his success” (Kaid, 2009). Barack Obama’s campaign used the Internet successfully in two ways. The first was to use multiple social network sites to organize over 1.5 million volunteers and the second was to raise over $600 million dollars in campaign contributions (Kaid, 2009).

The Obama campaign used a variety of digital texts to shape and channel a mass movement. They used social networking sites like Facebook, Twitter and MySpace aggressively (Ord, 2008) to recruit and organize millions of local volunteers. These social networking sites also allowed the Obama campaign to “keep supporters involved and active on his behalf” (Kaid, 2009). The Obama campaign’s created a texting list of more than 2 million users and used the SMS text message system to announce the Vice-Presidential nominee Joe Biden (Kaid, 2009). The campaign also established the use of video by creating a Barack Obama YouTube channel. The use of these sites by Barack Obama supporters far exceeded the use of these sites by the supporters of Republican candidate John McCain. (Kaid, 2009). 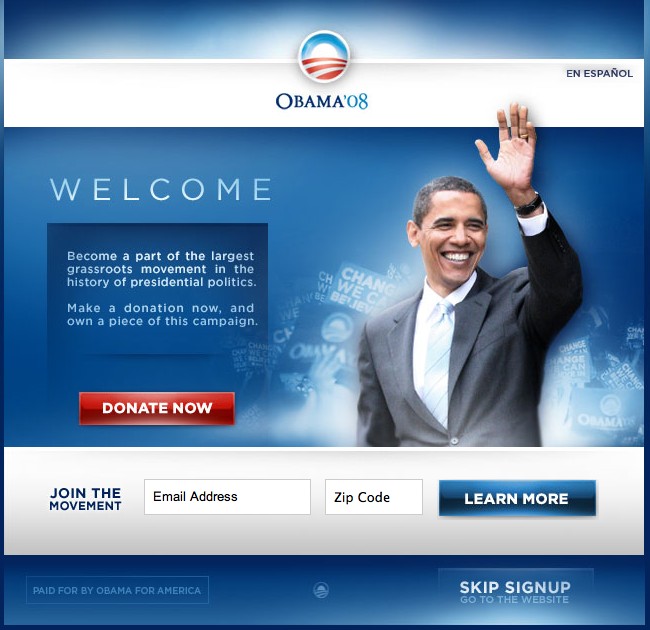 The second notable use of the Internet by the Barack Obama campaign was in the use of online fund raising. The Barack Obama campaign raised a record $600 million dollars through an online form on their website. (Flanagan, 2009; Payne, 2008) What was unique about this method was that many funds were raised from approximately 3 million individual donors making small $10 and $25 donations (Flanagan, 2009; Payne, 2008). The resulting campaign fund allowed the Obama campaign to decline public funding and exceed the spending caps as described in the Federal Election Campaign Act (Kaid, 2009). This allowed the Obama campaign to outspend the McCain campaign, which was a first for a Democratic campaign “in recent memory” (Simba, 2009, p 188). As Michael Luo described in the New York Times, “the impact on the way presidential campaigns are financed is likely to be profound, potentially on the tombstone of the existing public finance system” (Luo, 2008). 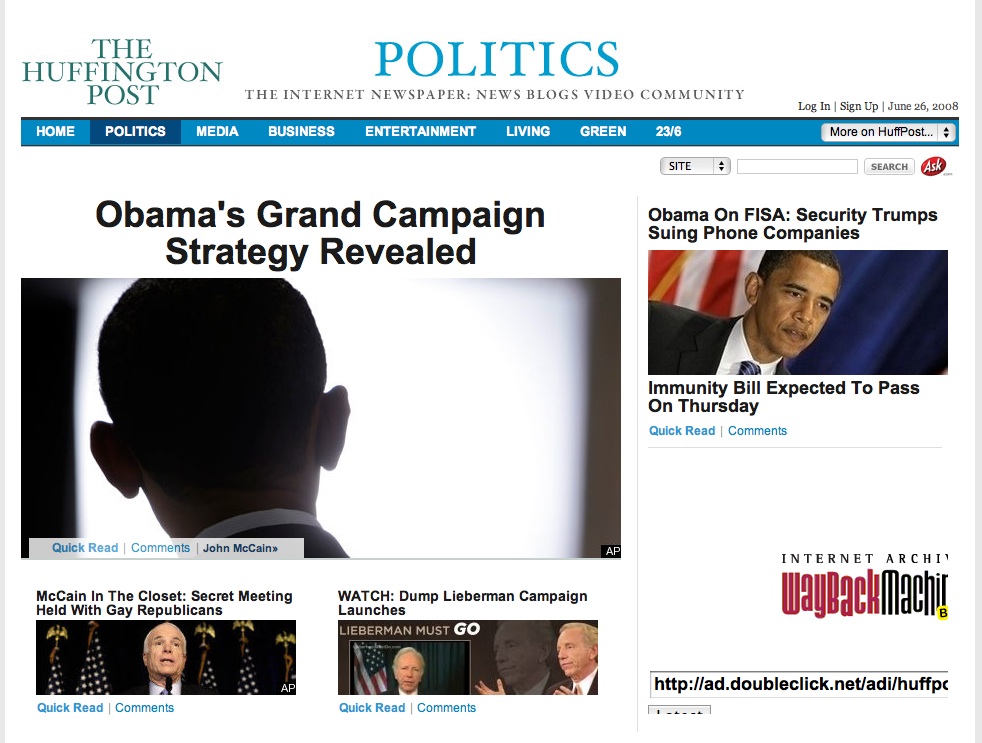 Another influential development in the 2008 Presidential Election was the rise of the blogger (Kaid, 2009) or citizen journalist (Mitchell, 2009).  As many Americans used the Internet as a source for election information (Smith, 2009) new media sites such as The Drudge Report, The Huffington Post and Politico became prominent (Kaid, 2009; Mitchell, 2009). The Drudge Report had over 798 million views during the month prior to the Presidential Election in 2008, which was six times more than the number of views during the month prior to the Presidential Election in 2004 (Ord, 2008).  “The 2008 election has solidified the political blogger as an authority voice in politics” (Ord, 2008). These online news sources forced the traditional media to pay attention to and cover political stories that were already viewed by millions of American voters. (Ord, 2008)

The success of using text in digital spaces to shape and channel mass movements by the Barack Obama campaign in the 2008 Presidential Election has inspired others to adopt similar strategies. 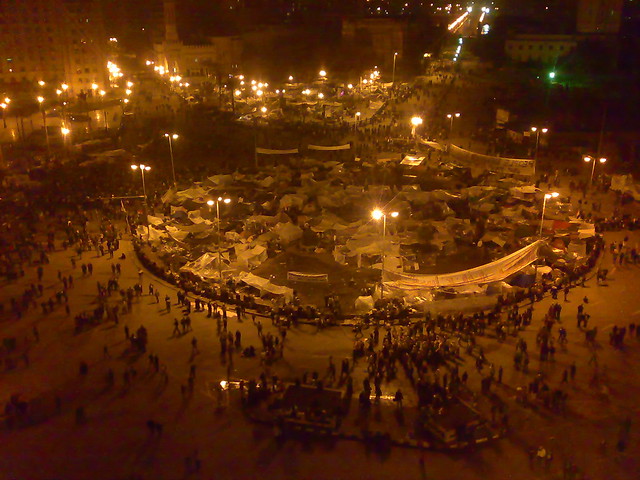 In December 2010, a fruit vendor in Tunisia set himself on fire to protest his mistreatment by police. The incident was spread through digital text technologies and encouraged protests throughout the region. In January of 2011 demonstrations toppled the long time authoritarian government led by ruler Zine El Abidine Ben Ali (Smith, 2011). Revolutionaries in other authoritarian regions were inspired by the Tunisian events and began protest in Egypt, Syria, Libya, Bahrain, and Yemen. David Faris (2010) in his dissertation Revolutions without Revolutionaries? describes the use of digital text technologies by Egyptian digital media activists in 2010 a full year before the protests in Tahrir Square. He cautioned that an uprising in Egypt will, “still depend on political, social, economic, and even natural forces, which can’t be predicted in advance, and which we will almost certainly struggle to understand if and when they are unleashed”(p 229).

As we have seen in the prodemocracy protests in Egypt, young people often rely on sites like Twitter, Facebook, and YouTube in order to communicate and organize. Moreover, these new media sites promote a decentralized social structure: people with different backgrounds and interests link together over a shared set of demands. These bottom-up social movements begin without a set agenda or organizational hierarchy; instead, new media social movements combine technology with spontaneity, offering a new way of interacting with the world (Samuels, 2011)

Statistic Canada. (2010) Individual Internet use and e-commerce. Retrieved from http://www.statcan.gc.ca/daily-quotidien/111012/dq111012a-eng.htm

2 Responses to The Influence of Text Technologies on Politics