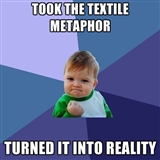 Like my thoughts on remediation earlier on, I have been wrestling with what to say here to sum things up / make connections. I’ve known the essence of what I want to say for a while, but with others’ great, and interactive final posts, I was feeling a bit inadequate. Well, it’s time to get off the pot, as some would say around here.

While making my notes and thoughts for my eP in 590, I was initially a little stuck when trying to think of what to include from this course. There was no single artifact that stood out to me and said, “Look at me! Use me! Aren’t you proud of me?” Upon reflection, what I really want to mention as my memento from this course is that it has permeated all my other courses and areas… it has entered sneakily through the back door and made itself at home. It’s been a minor mindshift. (by the way, feel free to visit my eP in its final stages at http://etec590.wordpress.com)

This course worked in a very literal sense… or… it followed in its own footsteps. The ideas of classmates, readings, and instructors have woven themselves together in a fabric… a textile… a texture… a, well… grand text, the pieces of which can’t be separated from one another. I was surprised by course’s end how much the idea of textile / fabric really ended up being a symbol for the whole course – for me, anyway. So, other than my – literally cheeky – meme above, I leave you with another unique form of texts colliding or remediating – the literal video version of an 80’s classic. For your information, this was also the first “literal video” that started them all, made by Dustin McLean in 2008.

This entry was posted in Making Connections. Bookmark the permalink.