The History of the Newsreel

The newsreel was introduced in the early part of the twentieth century as a medium for
presenting news and current affairs. The typical newsreel was ten minutes in length and they were shown mostly before the main feature at movie theatres. With the increasing popularity of cinema which led to the prominence of the newsreel as the primary source of news information, the production of newsreels was increasingly targeted for imparting certain information. As the allied countries entered into the World War II conflict, the use of newsreels blurred the line between news information and propagandist editorial. This paper will explore the rise of the newsreel as a primary source of news information into its role in spreading war propaganda to the masses during the World War II period through the analysis of two primary source newsreels.

There is no doubt that the newsreel was modeled after the popular press that preceded
it. The producers of newsreels saw themselves as performing the same job function as the editors of newspapers did. With the advent of cinema in the early 1900s, producers saw an opportunity to deliver the news in a way that had never been done before, to make the images on a page come alive with a combination of video and sound. As Campbell (2010) wrote, by the mid-1920s, the newsreel became extremely popular with an estimated 90% of all theaters in the United States showing newsreels to a weekly audience numbering in excess of 40 million people By the 1930s, most newsreel companies were releasing two newsreel editions weekly (Campbell, 2010).

As the similarities with newspapers existed, there were important differences as well. As a visual media, Newsreel producers emphasized speed of execution and the changeover of sound as the images on the screen could easily be manipulated to convey whatever message the producers wanted. In the end, it mattered little what was actually being filmed because the audience was being told what happened and what they were seeing on the screen. The images were essentially only there to be a back-up to the voiceover. As was often the case, if the appropriate footage or image could not be used or located, newsreel producers often substituted footage and images from other sources to give the illusion of the same full news coverage that regular newspapers provided.

Indeed, the beauty of this newfound media was in the rich treasure trove libraries where music, stock images, sound bites, and various other items could be used to supplement and enhance a story. This flexibility provided newsreel producers a new vocabulary with which they used to great effect. No more important was the background music that was used in newsreels to enhance the dramatization effect. As German film critic Siegfried Kracauer pointed out in 1943: “Nazi newsreel music makes the motor nerves vibrate; it works directly upon the bodily feelings. Like a fifth column these themes penetrate the spectator’s subconscious and soften it up for an eventual invasion by pictorial suggestions” (Hoffman, 2004, p. 134).

Because the nature of the newsreel was passive with the audience watching and listening intently to what was being shown, the narration was manipulated to whatever the producers wanted to say. As was often the case, newsreels were regularly edited to use footage shot sometime in the past or at different locations. In this way, newsreel producers could generate content at a much more rapid pace than newspapers could by pre-arranging the images to be used and then inserting fresh footage when needed in order to meet their weekly deadlines. Given the technology at that time, it was often difficult if not impossible for the average viewer to discern the difference and so what was presented on the screen was often taken in as the accurate news.

One area where the newsreel excelled at in providing news coverage was in covering
scheduled events and spectacles such as football matches, presidential speeches, and the
famous ship launchings. These events which were scheduled well in advance provided
newsreel producers the opportunity to setup their cameras in advance and to shoot real
authentic video and original sound to go with the images that lasted a minimum of five full
minutes. It is in these newsreels where a certain part of a political speech which may not have been captured in the transcription could be preserved. And the nature of the short clip was the precursor to the soundbite, where just a section of the speech could be captured and replayed over and over again. Newsreel producers quickly saw how a live event could be manipulated to portray whatever they wanted to show to passive audiences.

When World War II began in 1939, all media sources from both sides, the Axis and the Allies, played vital roles in informing citizens of news on the war front, and to help boost morale for the war effort. From the beginning, the newsreel production industry became an obvious target by governments due to the popularity of cinema and high adoption rate throughout theatres around the world. Newsreel footage from the war was shot by official cameramen on the front lines. From there, the footage almost always passed through various government censors who then issued the edited material to all the major newsreel producers. From the same censored footage, each newsreel producer then prepared their own narration which sometimes led to newsreels that were drastically different.

At the time, the production quality of newsreels was highly regarded and many producers won awards for their work. However, whether they won their awards for cinematic and technical achievement or rather for their highly effective propagandist qualities and contributions to the war effort is debatable. For example, the Kokoda Front Line produced by Cinesound Review 568 won the Academy Award for Best Documentary in 1943. The inscription on the 1943 Oscar is written as, “To Kokoda Front Line, for effectiveness in portraying simply yet forcefully the scene of war in New Guinea, and for its moving presentation of the bravery and fortitude of our Australian Comrades in Arms” (National Film and Sound Archive of Australia, n.d.). Similarily, the United States Army Special Services produced newsreel “Prelude to War” which also won the Academy Award for Best Short Film Documentary that same year in 1943 had the following inscribed on its Oscar, “A special award to ‘Prelude to War’ for its trenchant conception and authentic and stirring dramatization of the events which forced our nation into the war and of the ideals for which we fight” (The Academy of Motion Picture Arts and Sciences, n.d.).

Propaganda was a primary issue for the Nazi regime and the newsreel played a central role. Together with the more popular pro-Nazi regime films, newsreels were regarded by the Nazi regime as the most appropriate tool to spread their propaganda. For example, German film historian David Welch wrote: “Newsreels increasingly became a formalistic, carefully planned artistic transformation of reality in an attempt to achieve the propaganda intentions of the Nazi regime” (Hoffmann, 2010, p. 136). The newsreel became a central part of the Nazi media system, which included radio and newspapers, and eventually developed into a unique Nazi symbolism. The Nazi media system produced newsreels that determined the image of the Third Reich and by and large that image remains to this day. As a historical artifact, they helped form the foundation of what we know about the Nazi regime.

The first video clip chosen is a collection of German newsreels filmed during World War II called the “Deutsche Wochenschau” series (ZenosWarbirds, 2013). In this specific German newsreel, the propagandist language described earlier in this paper is clearly present through its use of manipulative techniques such as censored images, dramatized background music, and editorialized narration. Firstly, the images of the Nazi leaders in the parades are manipulated to portray them as victors even during German retreats. In the clip of the German Folgore fighters opposing the Allied air attacks in Italy, the German fighter pilot Pips Priller is shown smiling and giving a thumbs up, this despite the fact that the Germans were in a full retreat. Secondly, the background music chosen is very nationalistic as the trumpets are set to match the explosions on the screen. Even the tone of the narrator’s voice rises to match the images as can be seen when the big German guns are firing, and the narrator’s pitch rises to a climax. Finally, in the clip where Rommel visits the 21st Panzer Division in France, there are images of big explosions interlaced with the footage making it impossible to discern whether the explosions come from the same battlefield as the original footage. 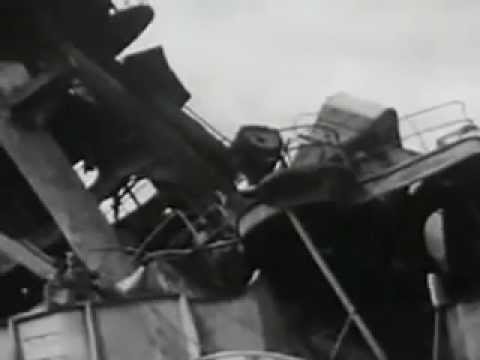 This second newsreel broadcast recaps the events of December 7, 1942 when Japan fighter airplanes attacked Pearl Harbor thus drawing the United States into the war (Doc45Publications, 2012). Although not as obvious as the German newsreel, many of the same manipulative language are used in an attempt to proselytize their nationalistic agenda. The pitch and tone of the background music is set to match the explosions on the screen. In comparison to the newspaper editions, the narration in the newsreel is highly editorialized. For example, with reference to the Japanese, the narrator uses such descriptive words as “cunning deceit” and “murderous rampage”. By contrast the narrator uses “the bravery of the sailors” and “actual footage from a courageous soldier” to describe the American side.

By the late 1960s, the newsreel phenomenon had finally subsided. The demise of the newsreel was due to a number of factors, with the rise of television news being the most impactful. Newsreel producers simply could not compete with the quickened news cycle that television news was capable of delivering. And with audiences quickly becoming used to watching the six o’clock news every night, the thought of watching it all again in review at the cinema became less and less appealing. With declining audience interest and diminishing quality with respect to what the television could deliver, the dwindling amount of revenue produced by newsreels over the final decade spelled the end of an era for the newsreel. However, many of the same techniques used by newsreel producers are present in the many 24-hour news channels that exist. The newsreel producers that preceded them first perfected this language of propaganda that exists in television news today. This paper will be further developed into a major project comparing and contrasting the techniques used in newsreels to the 24-hour news channels that exist today.

Campbell, B. (2010). A Bijou Flashback. The History of Movie Newsreels. Retrieved from http://www.moviefanfare.com/the-history-of-movie-newsreels/

The Academy of Motion Picture Arts and Sciences (n.d). The 15th Academy Awards (1943) Nominees and Winners. Retrieved from http://www.oscars.org/awards/academyawards/legacy/ceremony/15th-winners.html