I wanted to see what DUMPR could do as I had never heard of it prior to this week and thought I would pick a photo of myself. 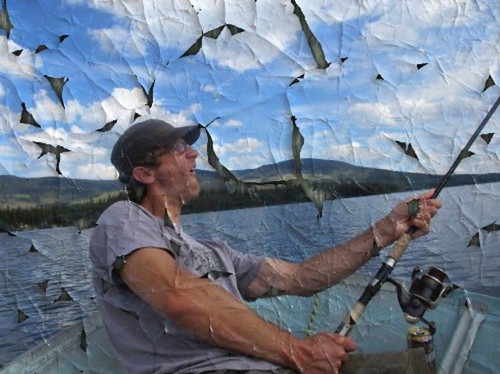 I chose this photo for a few reasons…

1. It’s a fake before I even started remixing it! I never caught a fish. In fact I am probably the world’s worst fisherman. I once went fishing with my brother and he caught 18 fish in about 2 hours using cheese as bait. I caught none. This day was typical for me fishing. Zilch. So I got my dad to take a picture of me fighting the “big one” just to break the monotony of watching him catch everything.

2. This picture was taken in a very remote corner of BC where I enjoy spending at least a week of every year with family. The lake is called Bobtail Lake (also known as Naltesby Lake) and our family cabin there has no power, no heat, and no running water. My father has made life for himself and my mother very comfortable by engineering a solar panel which charges a large battery on the roof of his “bunky”. The battery operates a pump which pushes water from a large tank under the shack to the kitchen tap. Winters are harsh on this lake and the ice typically reaches approximately 1.5m in thickness. As a result of extremes in temperature throughout the year, things deteriorate much faster….which is why I went with the “paint peeling” effect on my photo-hoax.

3. I personally think this photo captures my personality (and don’t jump to “flaky” before I explain!). I like to create fun (if I can) when none seems to be happening. I try to find the joys in what others might call mundane and then showcase it in a way that (perhaps??) gets people to reflect on their world in a slightly different way. Fun is infectious. Ask anyone if they would not like to have fun right now. If you hear the answer, “No.” Then I recommend you immediately leave the area.

4. It’s my picture. I didn’t have to worry about breaking copyright infringement. In fact, this exercise caused me to a) set up a Flickr account, b) learn how to really use Flickr, and c) set my own copyright category to my photo. This photo is placed with a Creative Commons license, meaning you can do with it whatever you like. Just be sure to pass along my name and that the fish I caught was a 7 pound Kokanee that you heard tasted delicious.

1 Response to Rip.Mix.Feed. – A Fishing Tale