Coordinates: Unknown. I cannot make it to the bridge right now because of the wind, and my GPS is off – we shall see where we sail to tomorrow!

We sailed by Newfoundland last night – we saw the lights of civilization off the starboard deck. The main effect of this on the ship was that many people’s telephones got reception and reset their clocks to Newfoundland time, which is a rather odd 1.5 hours ahead of Québec time (the Amundsen is on Québec time until further notice), so a few of us woke up at 5:30 in the morning instead of 7, somewhat bemused until we figured it out. In the morning the fog was thick enough to thoroughly hide any sight of land, and the winds have been steadily increasing. There are so many noises on a ship: the bowthrusters, the creaking of the bolted-down fixtures in the cabins, the wind, all the scientific instruments (mine ticks at somewhere between 3.13-3.85 Hz, which I’m getting very good at telling by ear), various clanging and thudding always, and now the foghorn. (My bunkmate and I have discovered the joys of having a small cabin on the lowest deck – the ship’s lower levels move less, and also, we are nowhere near the foghorn. Apparently, having one’s cabin next to the foghon is a less-than-ideal arrangement.) 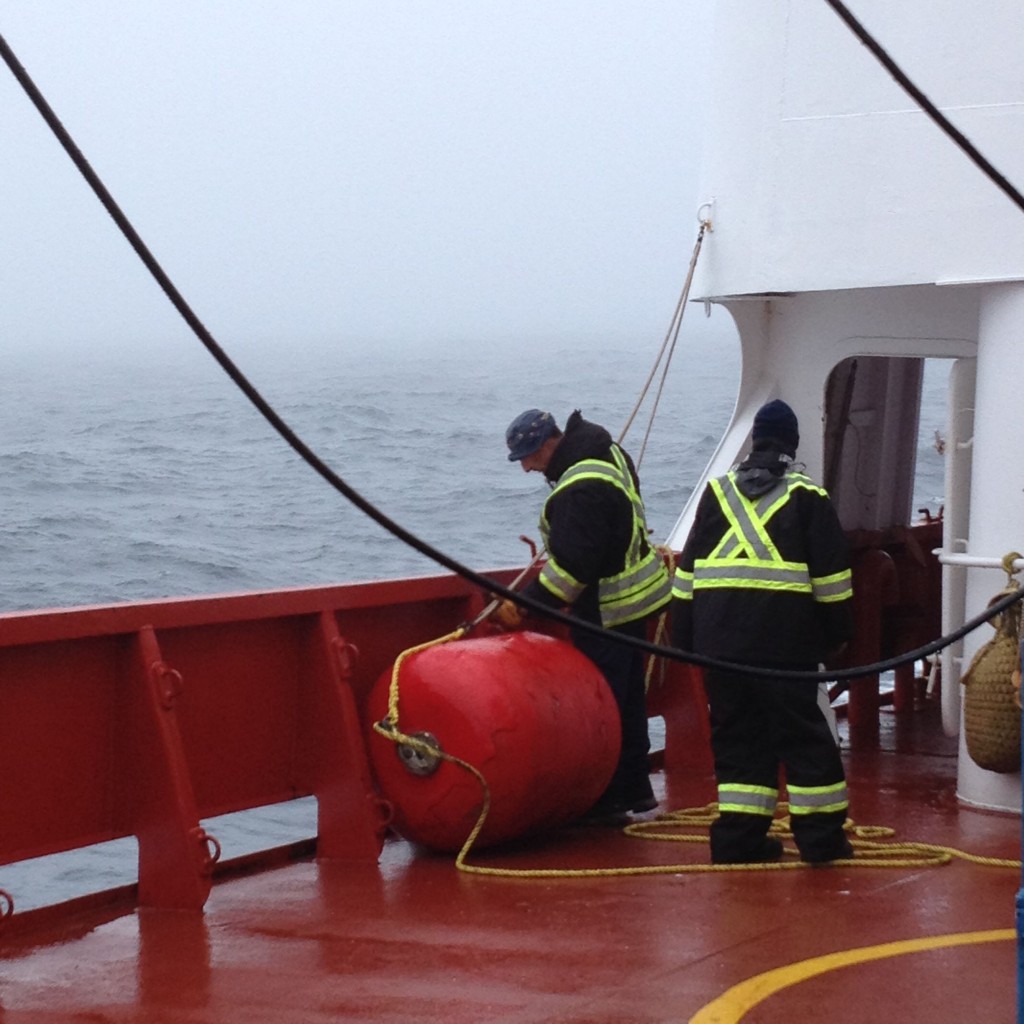 The ship’s maître d’equipage (boatswain) and crew work on the ship on a foggy Newfoundland morning.

The day was spent mostly in preparation for the first station, which is coming up around midnight. During a day, we typically have one or two science meetings, during which we coordinate how to best use station time. This one was held to the sound of crashing cutlery in the officers’ mess next door, because the ship was rolling considerably. The coordination of station time is quite tricky – most of the time on a station is spent deploying a rosette (a device with bottles on a line that goes to various depths in the ocean and collects either water or various parameter data), and most expeditions have multiple scientific groups, almost all of whom need water from a given rosette, and time is limited. This leads to complicated compromises. 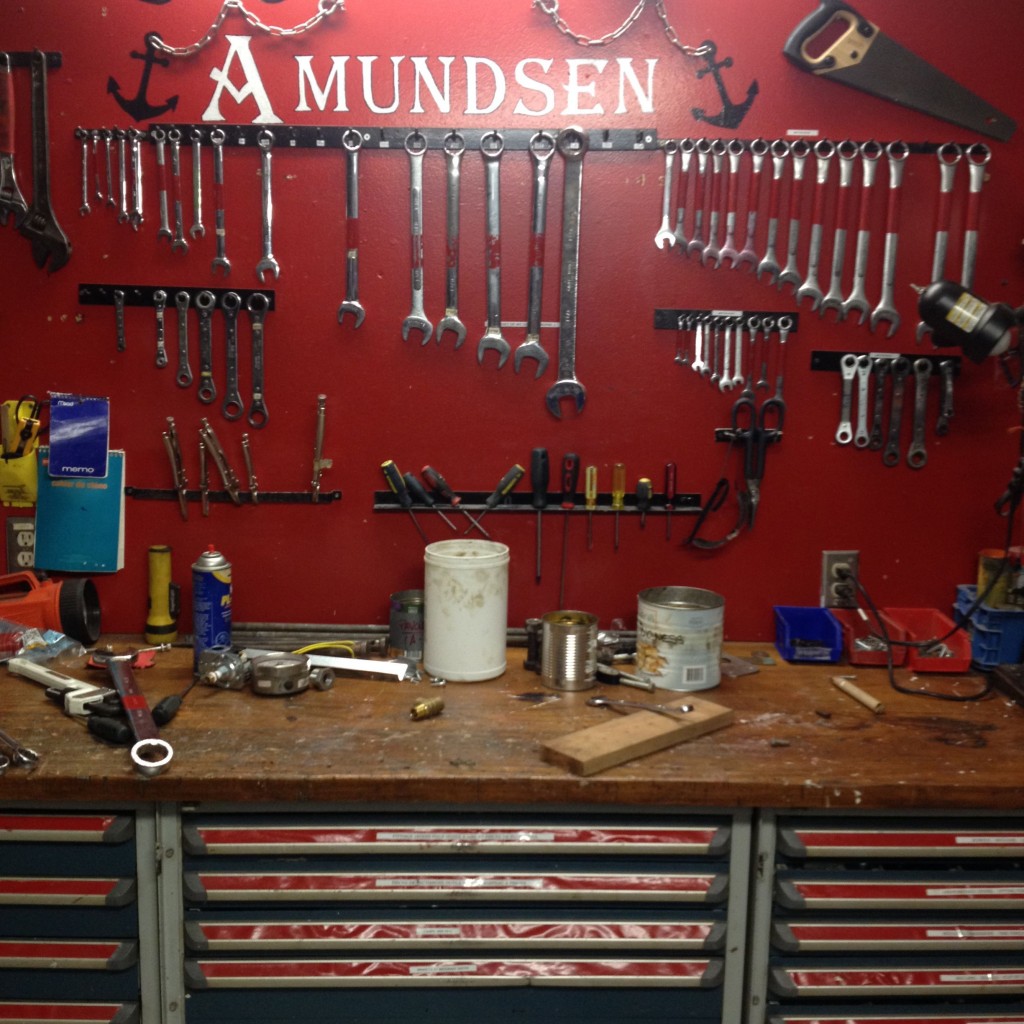 The Amundsen has a fantastic workshop! 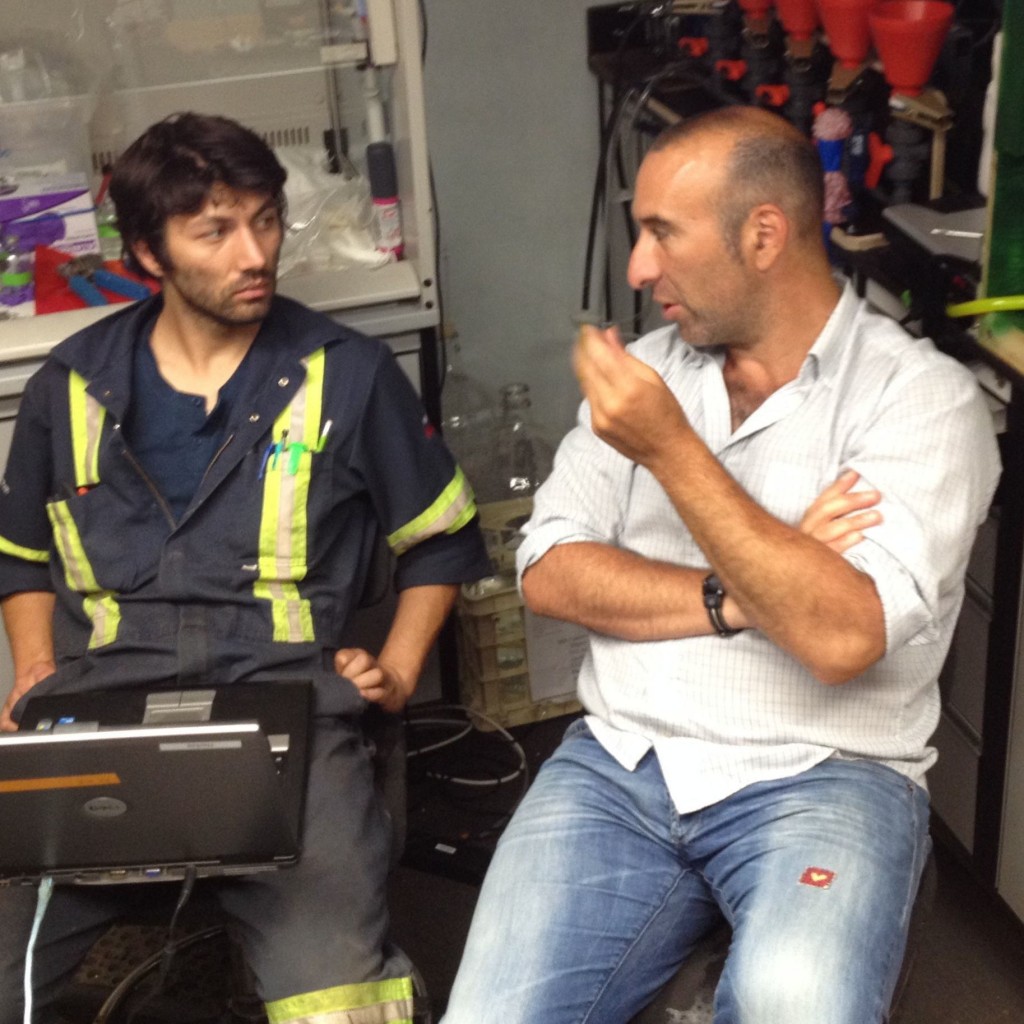 Thomas and Philippe work on setting up GPS synchronization.

Here is a good time to answer a question this blog received recently:

At least for the science team, there are two main schedules on a ship:  the meal schedule, and the science schedule. The meal schedule is constant: breakfast 7:30-8:30, lunch 11:30-12:30, dinner 5-6. The science schedule varies according to the weather, the abovementioned constraints, and many other things – for example, biologists often make 24 hour incubations, so they run a dawn-to-dawn experiment. Some other people might need to collect water in the middle of the night, others at midday, and often people are involved in each others’ experiments, so everyone runs on their own schedule based on need – there is always someone up, and there is always someone sleeping. In general, most people work quite long hours, and there are no weekends. The crew work in 12-hour shifts, from 6 to 6.  My robot, when doing well, runs 24 hours a day, and I check on him often. By law, everyone on board is required to sleep at least consecutive 6 hours a night, which is tricky sometimes.

I still have some hours of work to do tonight, so I’ll head back to the lab now. 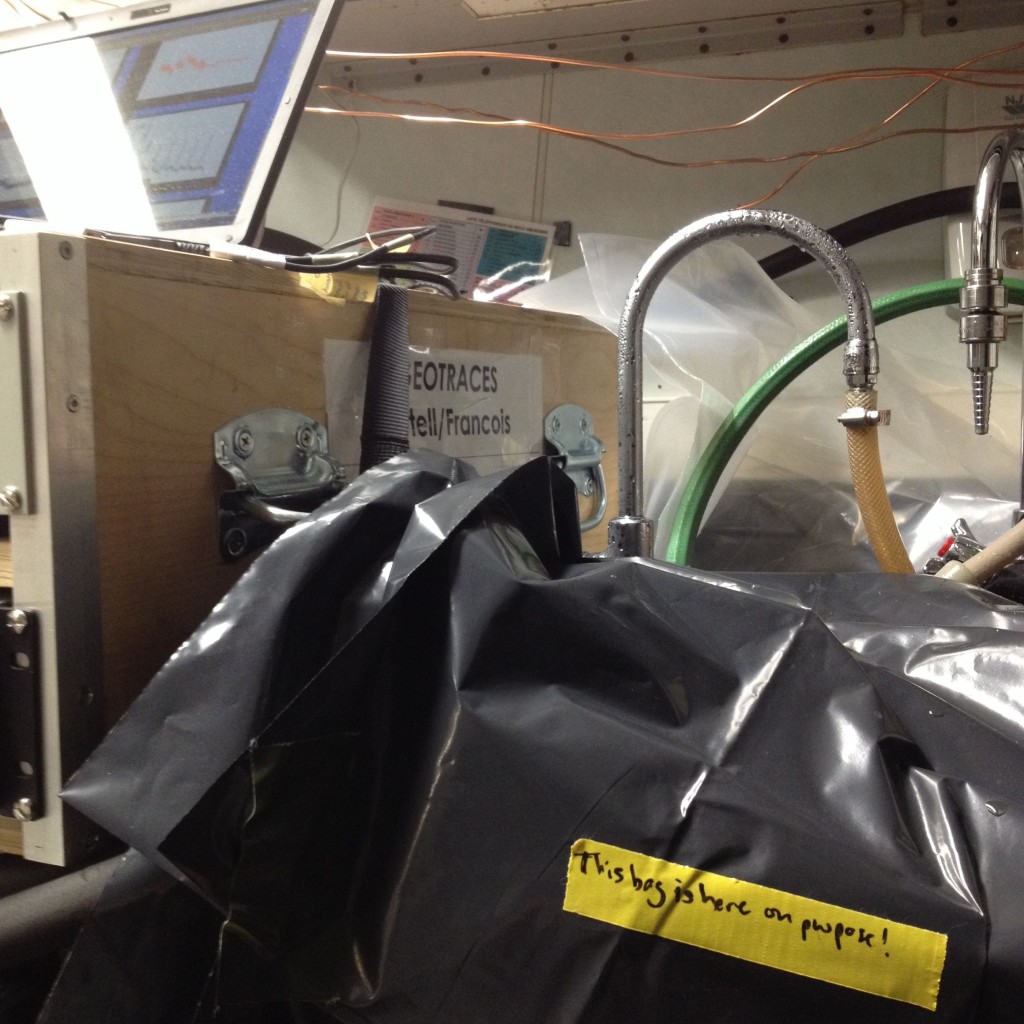