The popular Quick Response (QR) codes are becoming a useful instrument for many businesses. As Adam Toren mentions, in his blog “What’s the Deal with QR Codes?”, QR codes are “versatile, easy to use, and they have an element of fun that not many marketing tools provide.” Toren implies that any marketer would benefit from using a QR code as a promotional tool. However, Toren does not mention the possible risks associated with QR codes. People frequently scan QR codes that do not explicitly have any branding on them; this is potentially dangerous as they may be sent to a

site containing inappropriate content or even a site that installs a virus on their mobile device. The easy fix would then be to make sure you have your brand name on the poster or picture that contains the code. Although this may seem desirable, it could lead to competition sabotage; companies may create QR codes, with the brand name of a competitor, that leads to a dangerous site. Due to the risk, one misused QR code could label all QR codes as hazardous.

Is this not false advertising? Where is the line that separates fraudulent marketing and strategic marketing? Knowing this fact agitates me because I think of those people who speculated about the family, wondering where they came from and where they currently are. Furthermore, every subsequent Tim Hortons’ commercial I see, I will be thinking of how the commercial is actually distorted from the truth. Consequently I will be less likely to get as emotional attached to the story, similar to many people who know the truth. Overall, misleading the audience by displaying “Based on a True Story” may, in return, actually of hurt Tim Hortons through the bad media surrounding the issue.

Everyone knows of google’s recent success, but does everyone know why? Personally, I think the unique culture that exists within Googleplex is one of the key reasons, if not the biggest. As fellow classmate, Aaron Chan, touched upon in “Global Top 50: The World’s Most Attractive Employer“, Google creates an environment that allows its employees to always be comfortable and sociable. The success of the employees is causally related to this environment. Who wouldn’t work well after a relaxing message or a swim in a pool with an automatic current? Some more of Google’s perks and benefits can be found here.

Should this reason signal other companies to adopt similar organizational behaviour? It depends.  The reason this strategy works so well for Google is because this environment allows the ‘creative juices’ to always be flowing. Creativity is a necessary quality for employees of an innovative company, such as Google. Because innovation is strongly valued at Googleplex, there are whiteboards beside each foosball table, air hockey table, and every other game table on campus. This allows ‘spark of the moment’ ideas to be recorded.

For each unique company, there is an environment that best suits its goals; Google found its early on, which greatly contributed to its success.

What exactly is H.U.M.A.N? H.U.M.A.N is an innovative company that stands for Helping Unite Man And Nutrition. The CEO of the company, Sean Kelly, is an entrepreneurial figure in the business world. Kelly started his career as the founder of FitFuel, but because of the high risk involved he failed with this product. However, his perseverance continued to fuel his ambitions and he soon started on the H.U.M.A.N project, which has been doing well recently. Reading about Kelly and his dedication to this innovative business inspires me. Knowing the risks involved with starting the business and how he potentially could have failed twice shows his dedication to creating innovative products.

What amazes me most is Kelly’s ability in materializing his ideas, especially when facing adversity. It’s one thing to come up with a great idea in the business world, but to follow through and bring it to life is a path not many dare to take. I can only hope that if I ever come up with an original idea I may be as ambitious as Kelly is. For a tech nerd, like myself, this video may seem like heaven but according to Microsoft, it’s the future! The video illustrates how Microsoft predicts the technological future to be like, while focusing on productivity at work, home, and on the go. The reoccurring theme is touch-interfaced products. One of the most appealing feature, especially with today’s craving for energy-efficient products, is the option to see what is inside the fridge without actually opening it. With a simple touch, the door of the fridge/freezer becomes transparent and the food is labelled for simplicity and convenience. This prevents having to open the fridge to look for something and in return, saves energy by keeping the fridge at its desired temperature. This unique feature is just one of the many that are detailed in the video.

All of this futuristic technological talk begs the question: are we becoming too reliant on technology? My gut response would be to say “of course not!” but that is my attraction to technology overriding my rational thinking. WIll our kids be able to complete a task without the assistance of technology or will they be permanently dependant on their smartphones and laptops? The only answer is the future ahead of us.

“It’s easy to miss something you’re not looking for.” This statement not only applies to the awareness test but also highlights the Enron and Arthur Andersen scandal. Enron was “one of the world’s largest energy, commodity, and service company.” Arthur Andersen was “one of the Big Five accounting firms.” Together, they are synonymously and infamously known for one of the world’s largest accounting scandals. Enron did not properly follow GAAP, inflated its assets, and re-routed liabilities, to create an attractive balance sheet. A company that is well known like Enron could not deceive investors without help from an auditing service. Arthur Andersen filled this role for Enron, declaring the proposed balance sheet as valid. Andersen did not comply with GAAS (Generally Accepted Auditing Services) and was receiving large amounts of money for being ‘friendly‘ to Enron. Together, the leaders of Enron and Andersen mislead investors and the public to gain personal wealth.

How do we know the dominating companies of today are not using similar tricks? Are scandals similar to this one the reason for the implementation of IFRS (International Financial Reporting Standards)? These matters boil down to an ethics debate, which proves how relevant ethics is becoming in the business world today.

Do you remember when “Video Killed the Radio Star (♫) “? As classmate Angelica Cabrera touched on in “Is the Internet killing television“, more and more Canadians are watching TV shows or movies online now. This sudden transition from renting hard copies of videos to streaming them over the internet was detrimental to some companies, such as Blockbuster, and advantageous to others, such as Netflix. As Cabrera goes on to say, consumers are switching methods because of simplicity. It all boils down to an economic debate over opportunity cost. By simply streaming content over the internet, one avoids travel time going to the video store and back, the gas consumption from a vehicle and many other factors that build up over time. Although Netflix is number two in video subscription, behind Comcast, the company is synonymously known with the downfall of Blockbuster. This is due to the precise brand positioning Netflix created, which happened to fill the weak spots of Blockbuster’s brand position. The main Point of Difference is convenience to use and unlimited downloads for a flat rate. The breakdown of the companies can be seen in further detail with this info-graph: 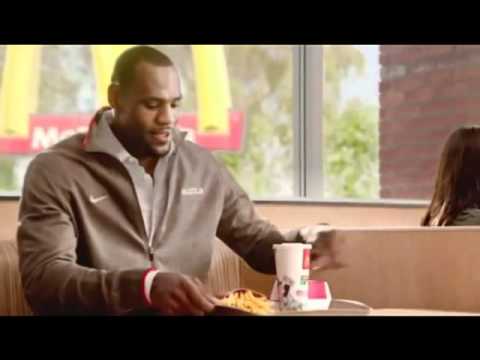 1 in 4 chances of winning! If only it was actually that easy. McDonald’s Monopoly Game makes winning seem easier than it is. To put matters into perspective, the odds of winning Lotto 6/49 (jackpots up to 54 million) is 1 in nearly 14 million while the odds of winning one million dollars through Mcdonald’s Monopoly is 1 in over 3 billion. Therefore, it is probable to win lotto 649 over 200 times before you win McDonald’s jackpot once. What makes matters worse is that McDonald classifies both stickers on one eligible item to be one game piece. The eligible items containing monopoly pieces are:

Is it really worth it to try and play McDonald’s Monopoly then? Simply put, it is not. The odds of winning a small fry are 1 in 20 and one would therefore have to purchase 20 eligible items to win a small fry. This is not only expensive but dangerous to one’s health. It becomes evident that the real winner of this game is McDonald’s itself. While most people buy the size bigger to get the game strips, they end up misplacing them causing McDonald to win.

In the end, play McDonald’s Monopoly at your own risk. Since the formation of Unions, there have always been disputes between employers and Unions. Earlier this year there were multiple states who “tightened” their bills on collective bargaining and union rights; this caused countless strikes and low productivity for companies that employed union workers.

Shortly after this nation-wide issue, one of the largest manufacturing companies, Boeing, engaged in a dispute with union workers.  Boeing allegedly “scrapped its plans” on building a new plant in Washington to “punish union workers for going on strike.” If the allegations are valid, then Boeing would have broken federal labour law by relocating the union working Washington plant to a non-union working plant in Carolina. Disputes similar to this one occur frequently across the nation but this specific case has received copious amounts of publicity. What’s shocking is that Republican politicians have taken sides and joined Boeing’s defence. If Boeing intentionally relocated to revenge on the union workers, then members on both the state and congressional level would be supporting the unethical decision to relocate. However, attorneys of over 15 states have agreed that this prolonged case “could harm job growth in the United States.” Therefore, this claim needs to be settled quickly to protect the American workers.

If Boeing loses the case, the company will suffer bad publicity over the unethical decision to target union workers out of jobs. Can man actually land on Mars? This question has been daunting humankind for years but, maybe, the better question is – can man afford to land on Mars? According to a Globe and Mail article, Nasa is in the midst of unveiling new plans for its rocket design called the “Space Launch System”. With the technology we have today and the advances in technology we are currently making, Nasa claims that this “largest, most powerful rocket built” will venture “to Mars in the 2030s.” However, while Nasa stimulates the public with the talk about this “breakthrough rocket” they manage to only gloss over the expenditures of the project: totalling $35 billion.

This cost barrier that Nasa is facing produces a prime example of Marketing and Accounting relationships that must coincide; this is mandatory to guarantee the “Space Launch System” takes flight. A synergistic environment is required internally to ensure that Nasa finds the most efficient and cost-effective way to market their plans to the government. If this environment is successfully created, Nasa’s chances of funding will be greatest. This, nonetheless, will be a difficult task given the current condition of the United State’s government.

Whatever the outcome, Nasa’s attempt to reach Mars is both expensive and bold.