I recently attended “A Guide to Inclusive Meetings for Professionals” facilitated by Cicely Belle Blain (love their name!).

My goal was, of course, to learn more about this topic so that I can create, host, and lead more inclusive meetings.

One of my favourite ways of processing information is to write about what I’ve learned. To that end, here are a few notes from the workshop. Some questions to ask myself when I design a meeting:

The facilitator created a helpful visual that summarizes 3 types of power: social, systemic and personal. (shared with permission from the facilitator)

Personal power is the easiest to re-distribute. Therefore, we need to think about how we can instill personal power onto others. The facilitator provided some ideas:

Practicing mentorship as a value, within the context of inclusive meetings, can look like:

Needs-based resources in a meeting

Favourite quote from the workshop

“Urgency is often more of a mentality than a reality”

Some forms of bias

Biases don’t have to be harmful, but they can be. The intention is often to preserve status quo. As someone who facilitates workshops regularly, it is a treat to watch/experience someone else’s strong facilitation.

Last month, I had the occasion to collaborate with Isabel Budke to offer Leadership Principles, a 3-part course at Vantage Point for those in the non-profit sector. Isabel facilitated the first and last session, and I did the middle one.

This was the first time I had facilitated outside of a higher education context in 15 years, and on a topic (leadership) that I had never presented on in a group.

I have noticed that many educational developers share similar facilitation approaches, so being part of a session outside of higher education and also led by someone with a different professional background gave me a few insights/reminders. These are presented below.

I tend to plan many small group activities and incorporate only limited large group sharing. Isabel did the opposite and I was surprised at how much and how easily the participants shared in the large group. I thought their sharing would dwindle quickly, but it didn’t.

In my facilitation (including conferences, workshops), I don’t think I’ve ever used a motivational quote. My assumption has been that an academic audience would not take me seriously and/or would be turned off by these. In the Vantage Point sessions, Isabel used a few inspirational quotes and I noticed that the participants enjoyed and reflected on these out-loud and without prompting.

Trust, and plan for fewer activities

I am prone to worry and plan all my facilitation sessions extensively. Session #2 (the one I facilitated) was no exception. Isabel, too, plans extensively. The difference is that I normally incorporate many activities (for fear that there won’t be ‘enough’) and, in her sessions, Isabel selected only a few activities and allowed more time. It felt spacious, productive, and more relaxing.

Be warm and less reserved

I consider myself a warm person and I like to connect individually with others. When I facilitate in a group, I think, however, that some of my warmth may be “lost” because I get concerned with The Plan (which tends to be overly ambitious when I’m facilitating something for the first time). I enjoyed seeing how Isabel exuded warmth throughout.

What have you learned lately by watching others facilitated? Let me know in the comments–I’d love to hear from you.

(This photo was taken on Day 3, during an activity that Isabel facilitated) 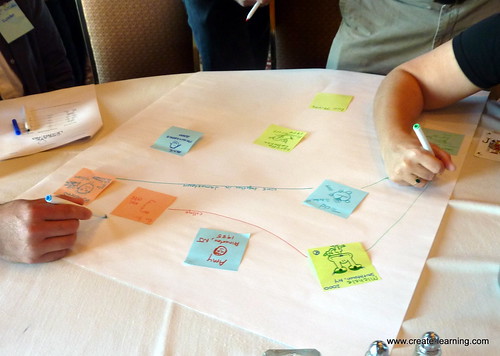 For our ice-breaker, we led a speed-friending* activity in which participants had 45 seconds each to respond to the questions below before they switched partners and answered the next question with a new partner. The questions we developed all pertain to the theme of facilitation. (We used only 5 questions because of time limitations).

The full workshop plan, including all our resources, can be found here.  Everything is in the open so you are welcome to use this. In a course I recently taught, I used and/or learned a few energizers. Since I love having these types of activities in my ‘back pocket’, I wanted to share them with you:

Good for a large group energizer.

Divide the group into 3 and have each sub-group stand or be in a separate area of the room.  Position yourself where everyone can see you and assign one group “Ping”, the other group “Pong” and the third group “Ball”. Let the group know that, as you point to a particular group (area of the room), you want the members to shout out “their” group name. As the conductor, you then point to different groups and can have fun creating combinations of the three words (ping, pong, and ball), i.e., “ping, ping, ball, pong” etc.

Stand In The Circle If…

Good as an energizer or icebreaker for 6 people or more.

This works well in a group of 25 or more people and is a powerful auditory experience.  I know of people who have led this in a large (100+) class,but haven’t tried that myself.

This game signifies a rainstorm starting softly and getting louder until it is pouring, with lightning and thunder. The storm quiets down again.

The instructions above were taken from here.

Do you have some fun energizers and/or icebreakers to share? If so, let me know!

Photo by Ingo Joseph from Pexels