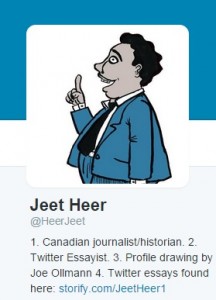 In using Twitter in this way, Heer has managed to subvert the expectation that a tweet must stand alone. When we get advice to “make it tweetable,”  we are being asked to come up with an idea that can be communicated and understood by the intended audience in a 140 characters without any explanation or context. But Heer is, in the words of his colleague Michael Hingston, “bending the medium to his purposes,” and in so doing is arguably becoming one of Canada’s most interesting public intellectuals. Ta-Nehisi Coates of The Atlantic Monthly demanded “WHO ARE YOU????!!???” on first encountering Heer’s novel redefinition of the Twitter form, but there are now plenty of examples of others structuring their thoughts in this way.

There is more to say about Twitter and context. I explore this further in my next post.

For more on Jeet Heer, check out his (rather low-tech) website.