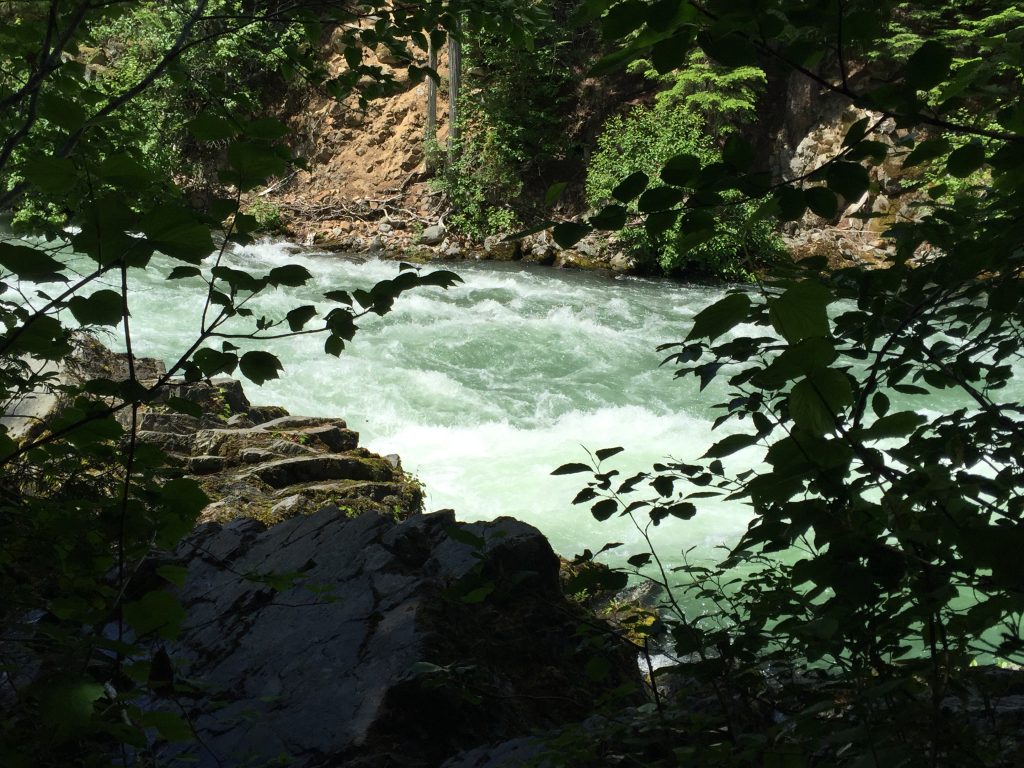 5]  In her article, “Green Grass, Running Water: Theorizing the World of the Novel,” Blanca Chester observes that “the conversation that King sets up between oral creation story, biblical story, literary story, and historical story resembles the dialogues that Robinson sets up in his storytelling performances (47). She writes:

“Robinson’s literary influence on King was, as King himself says, “inspirational.” When one reads King’s earlier novel, Medicine River, and compares it with Green Grass, Running Water, Robinson’s impact is obvious. Changes in the style of the dialogue, including the way King’s narrator seems to address readers and characters directly (using the first person), in the way traditional characters and stories from Native cultures (particularly Coyote) are adapted, and especially in the way that each of the distinct narrative strands in the novel contains and interconnects with every other, reflect Robinson’s storied impact.” (46)

For this blog assignment I would like you to make some comparisons between Harry Robson’s writing style in “Coyote Makes a Deal with the King Of England” and King’s style in Green Grass, Running Water. What similarities can you find between the two story-telling voices? Coyote and God are present in both texts, how do they compare in character and voice across the stories?

Robinson’s story “Coyote Makes a Deal With the King of England” (Robinson 64 – 85) and King’s story “Green Grass, Running Water” (King) share many similarities. Both stories experience the world through Native oral traditions and Western written traditions of storytelling. In this way they combine first voices with written text to create dialogue between Western theory and Native theory.  As a result, both stories blend current day Western elements and traditional Native stories.  As Chester writes in her article: both ways of storytelling, “reveals a dialogue with the past that moves into the present” and this incorporates “a history of Native tradition that now includes European elements within it” (Chester 45). In this way both stories reveal and utilize both Native and non-Native ways of knowing the world.

Another method that is used in both texts is the deliberate avoidance of directly addressing specific topics. For King, he alludes to the characters heading to the Sundance, and he gives glimpses of the Sundance, yet he does not directly speak about the Sundance. For Robinson, his story points to a reckoning, which implies Truth and Reconciliation, but does not address  this directly. I feel that the Truth and Reconciliation Commission has started to prepare the path for reparation, however, far too many people are unfamiliar with the details. I came across an excellent interview by Conversations That Matter entitled, “Truth & Reconciliation Reading Challenge. Click here for the video, and to learn more about this challenge.

Robinson and King’s stories both draw the reader/listener into the story, and make the listener/reader an active participant in the story. At times, in both stories, the words need to be read aloud to get the full understanding of what is being said. For example, in King, three men come into the Dead Dog diner with the names, “Louie, Ray, Al” (King 338). However, if you just read the words, you will not appreciate the connection, nor the meaning, that these allude to Louis Riel (the leader of the Métis and the Red River Rebellion). Whereas with Robinson, his story encourages reader to read them out aloud, because they are written with an oral voice. As a result, both authors meld oral story telling with written words. As Shultis writes in her thesis, “[b]y gesturing towards orality in their written literature, these authors [this includes Robinson’s work and also applies to King’s work] acknowledge the dialogic nature of a narrative that has been shaped by ancestral experiences and memory and thus write against the colonial master narrative of the contemporary Canadian nation-state” (Shultis iii). Click here to read the full thesis.

Coyote and God are present in both texts. In Robinson, “God sent the Angel to Coyote” (Robinson 66).  In this story, and in his first story about the twins, God is a benevolent being. Coyote and his twin, in Robinson’s stories, are the forefathers of both the First Nations people of Canada, as well as of the English. In the first story about the twins, Coyote is not the trickster, but instead is the obedient twin. However, when Coyote goes to England to meet the King, he needs to trick the King into agreeing to write the book. In this way  Coyote plays the trickster. However the trick Coyote plays is also a commentary on how the Europeans tricked the Native Peoples, and Coyote uses the European methods against the Europeans. In King, Coyote bridges different realities, and plays a permanent role throughout the novel in his dialogue with the narrator. These dialogues provide an avenue that aims for truth while examining the First Nation’s character’s personal and cultural struggles. In many ways Coyote is very much the same character in both texts, although King’s version comes across a bit silly at times.  However god is portrayed very differently in King’s story, and instead of being benevolent, is in fact displayed as a negative, self-serving creature. In the beginning of King’s text, Coyote’s dream becomes sentient, and Coyote names his dream animal “dog” (King 2). Most likely because a dog is a lessor form of coyote. However, this dog, gets things backwards, reverses its name, and in the process believes he is in fact GOD. He claims, “I don’t want to be a little god … I want to be a big god!” (King 3).  This sets the stage throughout for how god is viewed, because King uses the Christian perspective of god and religion, and he uses this trope in a negative manner. Most likely this is a commentary on the Residential Schools, and the Christian treatment of First Nation’s children for over 100 years at these schools.

Robinson, Harry. Living by Stories: A Journey of Landscape and Memory. Compiled and edited by Wendy Wickwire. Vancouver: Talon Books, 2005.