Guest Post: The Construction of Mining Image in Socialist Mongolia

Although Mongolians were relying on the pastoral economy up through the early 20th century, there were about 20 coal and gold mines operating in Mongolia by 1911. However, after the 1921 revolution, Mongolian leaders came under pressure by the Soviets to follow the communist ideology exclusively. From a communist ideological perspectives, Mongolian herders were potentially considered as a part of the capitalist class because herders own livestock.  Therefore, it became imperative for the newly-declared communist state to establish a working class. This pointed to the mining sector as a possible path for “creating” workers.

There were no obstacles to developing the mining under the communist regime for following reasons:

Because of these positive factors, there was no room for mining-related social conflicts in Mongolia. At the same time, the state was publicizing (advocating) the public benefits of developing the mining sector and reliance on natural resources through the arts and cultural policies.

Mining in the Arts and Media

Under the state policies, poems, songs, stories, and novels about rich mineral resources, mining and geological works, prosperity and development from mining, and successes of miners were reflected in Mongolian language and Literature curricula for secondary and high schools. Also, many documentary films, movies and dramas were created for this purpose. This contributed to create a positive image of mining and geological activities.

Many of these movies are still on “favourite movie lists” of Mongolians.  For instance, in 1961, the movie, Алтан өргөө [Golden Palace], was co-produced in collaboration with East German producers.  This movie contributed to public knowledge about subsoil mineral resources and efficient usage of water. 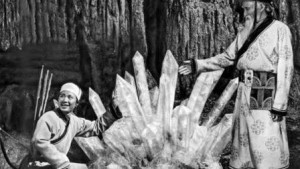 The geological exploration process was depicted in the 1962 movie – Түмний нэг [One of the Thousand]. The movie showed how mineral resources were discovered with the foreign assistance. Lately, one of the scenes, the snow storm, is widely circulated among Mongolian tweeters and facebookers. In this scene, two German geologists were arguing their tents during the snow storm while Mongolian guides wondering about their heated debate since guides didn’t speak German.

Rudolf: [it is] nice to have abundant natural resources, but they are far away from the prosperity.  To make this state as a real state and people as real people, it would need 100 years of hard work.

Max: Once they succeeded, this country would go more further.

Rudolf: But, they need nationalism and raise their national spirits.

Listening to this conversation, a Mongolian fellow suspected them belittling about Mongolia.

The other movie came around in 1981.  J Buntar’s “Гэрлэж амжаагүй явна” [Not Yet Married] film featured the image of mining engineer Gansukh while presenting the mining construction and managerial challenges of young engineer. This movie clearly aimed to attract youth into the mining sector as newly emerging industry.

The newly-established mining sector, at some point, led Mongolians into modernity [many new aspects were introduced into Mongolians’ livelihood].  The new lifestyle of miners, mining towns, and mining labor forces were created. Evidence of these mining-related social influences include many monuments for miners and even naming secondary schools after famous miners. In addition, the state created special medals, awards, and merit-decorations for miners and set up new social protection mechanisms for them. 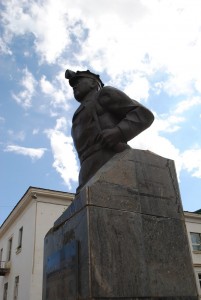 In sum, Mongolian communist leaders used propaganda to actively create a positive image for mining during the communist regime.

Jargalsaikhan Mendee is a Deputy Director of the Institute for Defense Studies of Mongolia. He holds a PhD in Political Science from the University of British Columbia, and MAs in International Relations from the US Naval Postgraduate School and in Asia-Pacific Policy Studies from the Institute of Asian Research of the University of British Columbia.
View all posts by mendee →
This entry was posted in Cinema, CIRDI, Enkhbat Avirmed, Media and Press, Mining, Mining, Mining Governance, Pop Culture, Society and Culture and tagged construction of socialist mining image. Bookmark the permalink.

1 Response to Guest Post: The Construction of Mining Image in Socialist Mongolia