Our guest is Undrakhbayar, the founder and director of Tugeemel Hugjil (Universal Progress MILC), the first-ever Center for Independent Living for people with disabilities in Mongolia. As a result of a doctor’s failure to perform a spinal tab (extraction of spinal fluid), he lost his ability to walk. It turned his life upside down. He was shocked, depressed, frustrated, and even thought of suicide.

Listen to our Podcast “Untold: The Hidden Stories of Persons with Disabilities in Mongolia” (in Mongolian)

One day, his sister asked him to memorize hiragana, a Japanese alphabet, instead of doing nothing. Not long after, he ran into elder Japanese tourists – they happened to be staying at the Takhilt rehabilitation resort. So, he tried to communicate with them in Japanese. It was the moment, he decided to go back to university to learn Japanese. After graduating from university with a Japanese language degree, he got the Japanese scholarship for people with disabilities in the Asian Pacific Region. Living and studying a year in Japan was an eye-opening experience for him and inspired him to introduce an entirely new concept – Independent Living – in Mongolia to give the disabled people hope. His center has 18 staff members and 600 members. 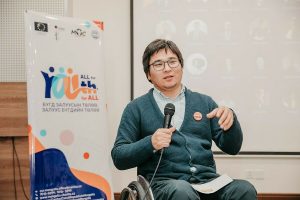 Photo: Mr. Undrakhbayar.Ch, Founder and Director of ‘Universal Progress’ MILC (all the images in the article are used with permission by Undrakhbayar)

Before this incident, he had been dreaming of becoming a history and archeology teacher. Then, he took a year off to earn some money to pay his tuition, but the tragedy happened, and he did not want to go out. After meeting the Japanese elder lady at the resort, she sent him money to get some treatment. And his mom told him to continue studying Japanese, at least, to write a thank you letter to the Japanese lady. So, he started studying Japanese at the language center. But a teacher advised him to study at the university instead of wasting time and money at the center. Soon, he joined Ireedui, a Japanese Language Institute. Initially it was hard, he said. He lived in a five-story building without lift. His dad was working so hard to get some money to pay his taxi and his mom used to wait for him outside of the school with a glass, since the institute did not have an accessible washroom. Once he got to know his classmates, things got much better – he smiled and shared funny stories. He made friends and met his future spouse at the school. Later, in 2013, he studied for a master’s degree at the University of Finance and Economics. And he was thankful to the university administration that made quick improvements in terms of wheelchair entrance and washroom accessibility.

The most touching part of the podcast was about the mental situation-the absence of psychological counselling for both the disabled person and their close ones. Many people could not accept the fact, express their frustration, and became traumatized. Looking back, Undrakhbayar thinks that if there had just been someone who would have told him that he will never walk again, and that he now needed to learn how to live with a wheelchair, it would all have been much easier for him. There was no one who could give him practical advice on how to sit in a wheelchair, how to transfer to a toilet seat, or how to maneuver. All steps were unknown and only caused stress and frustration. If there had been peer-counselling by a disabled person for each step, it would have been extremely helpful. Or, there could have been a psychologist or a social worker to help him go through this difficult transitioning period. In Mongolia, he said, doctors often give false hope – along the lines of ‘if you try, you might walk again’. But, for many, this causes unnecessary efforts, a waste of time and money to achieve something impossible. So, doctors should be truthful and if they cannot be, they at least should refer to someone who went through all this trauma and hardship and could provide peer-counselling. In Japan, for example, medical centers let disabled people immediately practice sports (basketball, ski, etc.) to get them mentally distracted, to help them adjust to their wheelchairs, and to develop their muscles. The National Traumatology and Orthopedics Research Center needs to set up a peer-counselling service, Undrakhbayar argues, this would help many people to get adjusted quicker and relieve their mental pains. Yes, the mental hardship and absence of a support system was highlighted by all our earlier guests. Here, Undrakhbayar is proposing the most practical solution – peer counselling for all types of disabilities. As he said, there are many issues that he cannot discuss with his family or even doctors because they do not understand. The only person he would be willing to listen and talk to is a person who has the same disability and gender. 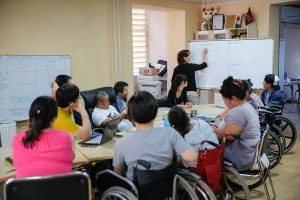 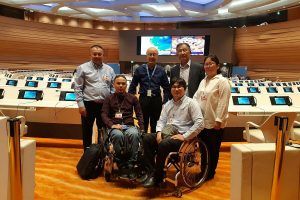 Photo: Mr. Undrakhbayar with his colleague Mr. Nyam-Ochir along with other members of Mongolian NGOs, participating in international conference at United Nations, Geneva, Switzerland

Because of the pandemic, Tugeemel Hugjil cancelled the most wanted and awaited international event, which would bring its international partners from eight countries in the Asian Pacific Region. Undrakhbayar sighed, this could have become their capstone event for the 10th anniversary of Tugeemel Hugjil and, of course, their fight for promoting independent living. Unlike our earlier guests, Undrakhbayar appears to be highlighting the positive impacts of the pandemic. His staff has been learning lots of new technologies and programs on the internet. He has been conducting more meetings with international organizations and new partners. The pandemic allowed them to renovate their office and to improve the working environment. Otherwise, the office is always crowded and busy as they work with their members. And he does acknowledge that the pandemic has been very hard on their members because they could not participate in social activities.

Listening to Undrakhbayar’s conversation, it becomes clear that it has not been easy and took tremendous efforts to introduce the concept of independent living. If it had not been for Avirmed akh (brother), who is working for their non-governmental organization, Undrakhbayar cannot imagine that Tugeemel Hugjil would have become one of the influential non-governmental organizations for disabled people. There were many times, he wanted to give up. However, Avirmed supported him to stay on course and reach his dream of introducing independent living in Mongolia. The happiest moment is, as he describes, when he hears the noise, excitement, and team spirit in his office, and sees these mostly disabled employees who overcame their fears and frustration working together for a common good to make the society more inclusive for people with disabilities.

Jargalsaikhan Mendee is a Deputy Director of the Institute for Defense Studies of Mongolia. He holds a PhD in Political Science from the University of British Columbia, and MAs in International Relations from the US Naval Postgraduate School and in Asia-Pacific Policy Studies from the Institute of Asian Research of the University of British Columbia.
View all posts by mendee →
This entry was posted in Education, Health, Human Rights, Inequality, Mendee Jargalsaikhan, People with Disabilities, Podcast and tagged MENDEE Jargalsaikhan. Bookmark the permalink.