Thanks to my dear friend Hannah for giving me the idea and letting me use her poem.

[unireality’s channel] (2010, Feb, 10). BBC Who Knew Slugs Could Be So Romantic. Retrieved from https://www.youtube.com/watch?v=wG9qpZ89qzc

The fashion house Dolce & Gabbana is infamous for their offensive campaign ads depicting nudity and rape. When I was younger I used to read men’s fashion magazines and this ad (above) from 2007 made an impression on me as being particularly offensive. It depicted a woman pinned by the wrists and prostrate on the deck of a swimming pool by a shirtless man, while other men gaze down on them. This ad was quickly banned in Spain where it was originally released and D&G removed it from their campaign (Duncan, 2015). There are many other ads from D&G that portray similar scenes of rape, be it male on female, female on male, or male on male, always featuring models with passive faces, and usually including passive onlookers who, may or may not be actively participating. The media is often quick to turn a critical lens on these campaigns and the fashion house no doubt benefits from the publicity.

Recently, however, Dolce & Gabbana has changed their ad tactic, moving from their rapey ads of the early 2000’s to what they call their Modern Italian Family advertisements. D&C ads now depict tableaus of models posing as happy, modern, Italian families in Italian scenes and landscapes. Singer/Actress Madonna featured in the first campaigns and Actress/Model Monica Bellucci features in them currently, as in the ad seen below. These family scenes depict ‘typical’ life in markets, cafes, near the beach, and in homes; and often include models of all ages including babies and the elderly. These wholesome, traditional, family-oriented ads are an improvement on the earlier message of sex and rape D&G was promoting. 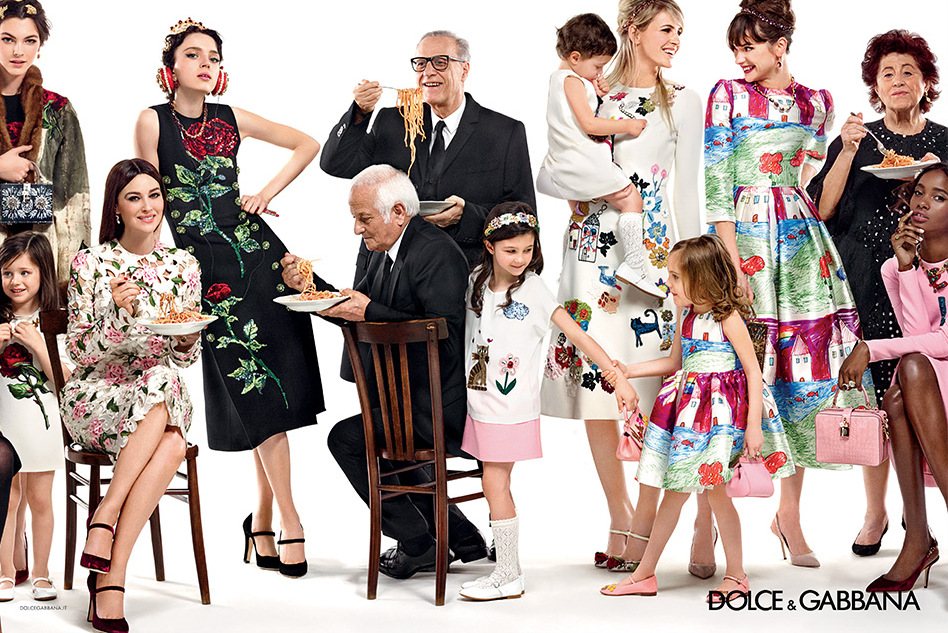 In fact, D&G continues to offend consumers and the media with their bigoted views on in vitro fertilization and their stance against gay marriage and parenting. Duncan states that “in a recent issue of Panorama” (2015), designer Dolce is quoted as having said that “you are born and you have a father and mother. At least it should be like that” (Duncan, 2015). In light of these bigoted statements and promotion of ‘traditional’ families by D&G, the images of D&G’s traditional Italian family takes on an aggressively prescriptive tone.

In the image below, I have taken a Dolce & Gabbanna from this year, depicting a portrait of one of their modern Italian families, and superimposed the rape scene from the 2007 campaign ad. While D&G has cleaned up their advertising campaigns considerably, this does nothing to repair the harm done to consumers in the past. I have found no news of action on the part of D&G to make reparations (by, for example creating an ad campaign that educates consumers about consent). While these ads may have prescriptive undertones regarding what constitutes an acceptable family unit, and are at least a step away from promoting rape, they are still haunted by images from the past. In my jammed image, the Italian family is, confronted by the skeletons in its closet, and just as the fashion house itself is doing nothing to counteract the harm it may have done by promoting rape imagery, the family in this image is doing nothing to stop the rape that is happening in front of them. The Italian family, from children to grandparents, is ignoring the plight of the woman in front of them, as is the fashion house that produces these images.