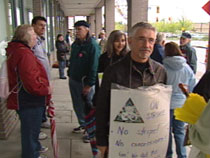 Bargaining between the BCTF as employer and one of its two union staffs, CEP 464, began approximately 6 1/2 months ago. The BCTF executive appears intent on seeking major concessions from the staff whose labour power facilitate the BCTF’s own struggles against contract stripping and anti-union attacks. No one in the labour movement or allied communities can take any pleasure from what is happening. We can only hope that a fair and equitable resolution can be found.