Every first Wednesday of the month Nancy Gallini, the dean of Arts, hosts a discussion session with any interested Arts student in MASS (BUCH D140).

Today’s focus was on a controversial article published last month in The Underground, the official AUS newspaper. The article, titled “So-Called ‘Campus Rapist’ Simply Exploring his Sexuality”, is a very offensive satire of rape. Many students immediately expressed their discontent with the article and the newspaper as a whole, some even demanding it to be shut down. Apologies were expressed by emails, the Ubyssey and by person by members of the AUS and the editors of The Underground and all copies of the issue have been removed from public spaces (you can still read the article in the Facebook group Rape is Not a Joke).

Many students expressed that they thought that the UBC administration is not taking enough and effective steps about the culture of violence and rape on campus. Representatives of the Women and Gender Studies Undergraduate Society and VDAY spoke about campus being an unsafe place for marginalized bodies. There were also many concerns about the way in which sex and women’s bodies are used by the AUS, especially in the very derogatory Campus Kickoff poster. 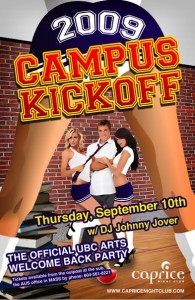 The dean’s position was that she thought it was very important for the faculty as a whole to have means of expression like The Underground and that she didn’t want to impose herself on student’s voices. She was very open about her interest in engaging the Arts community in debates, conferences, meetings and the like about the serious issue that is rape and violence on campus.

Some of the solutions suggested were the use of a faculty/campus wide emergency system to inform all students about violent acts on campus, which happen all the time even though many students don’t know about it.

Unfortunately I couldn’t stay until the end, but a friend of mine told me that the dean said that she was going to talk about all of the points raised with the AUS executives. I wonder, however, if that will be enough. I feel that the AUS executive’s position was very lacking. The VP External’s argument, for example, was that he had so much work that he only had time for four classes and he was going to have to extend his degree as if that made it OK for these things to happen.

I agree with the comment that the dean’s office should support marginalized voices in UBC. I really don’t want to live in a campus that sexualizes our bodies to sell and blames victims of sexual assaults instead of perpetuators because of social constructions of heterosexual masculinity.

To take this even further, I think that there are many things that the Arts faculty and students have to reconsider. How about the slogan “… because size does matter”? How about the very disrespectful habit of calling girls “bitches”? How about the fact that today’s Meet the Dean session was attended in its majority by women?

I'm from a small and beautiful town next to a big and amazing lake in Guatemala.
View all posts by Valentina →
This entry was posted in Faculty. Bookmark the permalink.

3 Responses to Meet the Dean