Cotton Castles and Ancient Ruins: A Weekend in Asia

Traveling with a group of six girls is a bit of a hassle and a lot of fun: way too many unwanted attentions and just the right amount of gossip to have a blast in another three-day-weekend adventure.

This time we flew south to the land where St. Paul, the Virgin Mary, Marc Anthony and Cleopatra all lived in at one point in history.

We visited Mary’s house, which is surrounded by beautiful olive trees, and even though I am not religious it was impossible to not appreciate people’s faith as they came from all around the world to touch the holy water from the fountain and write a wish to entrust the virgin with. 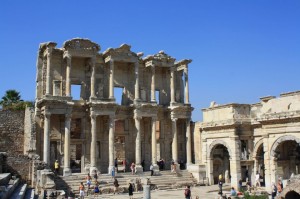 That same day we walked for hours in Ephesus, simply amazed by how people so many years ago could build such monuments. It’s all very well preserved, but only 15% of it has been uncovered until now. The library (which is the best known building of the site) was all that it promised to be: tall and standing -as always. My favorite part? the public bathrooms, the 24-thousand-person theater and having a well deserved Efes (the most popular Turkish beer) in Ephesus.

After a beautiful sunset at the beach we were met at the hostel by one of the best turkish dishes I’ve had so far -which of course included eggplant- a fire, a pool table and backgammon. 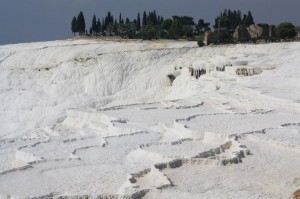 The next day we visited a unique geological formation, Pamukkale (literally Cotton Castle in Turkish). Also called ‘White Shelves,’ this place is a natural wonder of calcium deposits and about 50 other minerals that have covered the mountainside in a white-ish rock that could easily be confused with snow if it wasn’t surrounded by palm trees. A city of about 100,000 people developed around this area in the greco-roman times and the pools of warm spring water were believed to have curative qualities -which meant that a lot of old rich people moved there and that today there are a lot of beautifully carved sarcophagus(es?). This was also the city where Cleopatra had a very special venom developed to kill her sister Arsinoe so that, ironically, she wouldn’t suffer in the process. Today we call it arsenic. 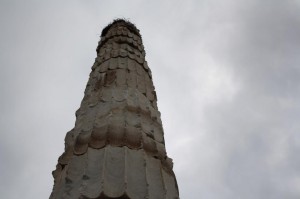 On Sunday morning we visited one of the seven wonders of the ancient world: the one remaining column of the Temple of Artemis, goddess of war and fertility (hoping that we wouldn’t be blessed by either of her qualities!) and in the afternoon we headed to Izmir. Izmir is the third largest city in Turkey but it was cloudy and windy when we got there and it didn’t seem very impressive compared to Istanbul. Even so, we had a very relaxing afternoon drinking çay by the sea and having a small backgammon tournament which, yes, I did win.

Finally, we took an early flight on Monday, took a cab back to Europe and made it just in time for our 12.30 class! 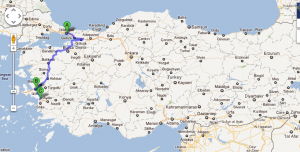 I'm from a small and beautiful town next to a big and amazing lake in Guatemala.
View all posts by Valentina →
This entry was posted in Turkish Delights, Uncategorized. Bookmark the permalink.

1 Response to Cotton Castles and Ancient Ruins: A Weekend in Asia