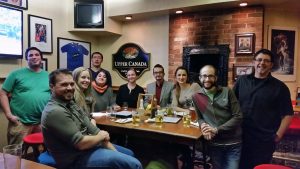 CAPS is the national association for postdoctoral scholars in Canada, and works to clarify the role of postdocs in Canada, advocate for equitable treatment of postdocs, and represent the interests of postdocs at Federal and Provincial levels. It does this by acting as a liaison between postdocs, institutions, funding agencies, professional organizations, and provincial and national governments. It is also active in advocating for postdocs and providing resources for professional development.

The CAPS annual general meeting was held at the University of Toronto Campus in downtown Toronto, and covered a number topics [pdf] to update postdoc representatives from institutions across Canada, as well as representatives from SSHRC (Patrick Couperus), CIHR (Alysha Croker), and the Burroughs Wellcome Fund (Victoria McGovern), on various CAPS activities.

The meeting started off with an update on the new CAPS website from the Chair, Joe Sparling (University of Calgary). It is much improved from the previous website, but is still under construction, and the CAPS executive welcomes people to get in contact with them if they have suggestions for improvement of if you can help with the French translation of the site.

The Past-Chair, Mohamad Nadim Adi (University of Alberta) provided an update on the CAPS constitutional amendments [pdf] that were voted on by all CAPS members during the general election back in May. The responsibilities of the executive have been clarified, institutional membership has been abolished, and seven member-at-large positions have been created on the Executive. Four of these position have been filled thus far: Michael Kyweriga (University of Lethbridge), Peter Clark (SFU), Grace Iyirhiaro (University of Ottawa), and our own VP External, Stefanie Vogt (UBC) .

Nafisa Jadavji (University of Ottawa), the CAPS Vice-Chair External subsequently gave us an update on the various events held across Canada during National Postdoc Appreciation week back in September: many events were held at a few institutions, but many have yet to embrace the event. Additional advertising earlier in the year was suggested to increase awareness.

Some of CAPS recent advocacy activities, namely their involvement in the Federal Government’s Fundamental Science Review, was discussed by Joe. CAPS sat in on the round table discussions in July, as well as submitted a position statement to the governmental Advisory panel about the issues and challenges that postdocs in Canada face. Some of the University of Calgary’s Postdoctoral Association’s efforts in lobbying the provincial government of Alberta for additional postdoc rights and benefits were also discussed.

During the strategic planning sessions, ways to better use the website to both bring in funds for CAPS as well as provide additional value for postdocs, were talked about. The National Postdoc Association of the USA has a great deal of resources available to their postdocs (accessible to anyone who pays their membership fee), and it would be good if CAPS could do something similar, however because CAPS is a much smaller organization, the time, person-power and budget to do this is a major concern. The other area of focus in these sessions was advocacy around immigration policy for postdocs, and initiatives to unify policies about postdocs at the federal level: specifically to have a consistent definition of what a postdoc is, a federally mandated minimum pay, access to EI and CPP, treatment of all postdocs as employees regardless of funding source, and access to benefits.

Alysha Croker from CIHR, and Patrick Couperus from SSHRC then each gave a brief overview of their funding bodies’ current strategic objectives, and how they are trying to improve training, resources, and outcomes for the majority of postdocs that do not end up in tenure-track academic jobs.

The final topic of the day was the sneak peak of the 2016 CAPS Survey results. 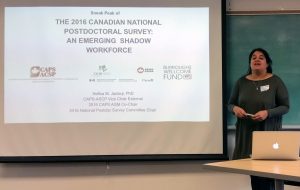 The CAPS postdoc survey is the only survey of its kind in the world, and was made possible by funding from the Tri-Council agencies and the Burroughs Wellcome Fund. The full survey results will be released November 21st on the CAPS website. The survey contains responses from 2109 postdocs from Canadian institutions, or Canadians working abroad. One of the key findings from comparisons with the 2009 and 2013 survey data is that postdocs are spending more time as postdocs, and the average age increasing (avg age 34), resulting in different issues and challenges facing today’s average postdoc compared to postdocs in the past. One of the most concerning statistics to come out of the survey was that over 76% of all surveyed postdocs had experienced mental health issues (depression, deep sadness, thoughts of suicide, etc) lasting for a month or more, compared to 20% of the general population. Only a small portion of the survey data was discussed, so stay tuned for the full report to be released on the 21st!

The CAPS AGM was a great meeting, and I encourage anyone interested in postdoc issues, advocacy, or improving the postdoc experience to get involved with CAPS! If you’d like to become involved in the UBC PDA, have any questions, or would like to discuss things in more detail, please contact us!

The CAPA Conference (November 1st – 2nd)
CAPA is primarily an association of senior academic administrators and staff responsible for postdoctoral issues at universities and research organizations across Canada. The organization aims to share best practices, and to promote an environment for successful postdoctoral scholarship and training. 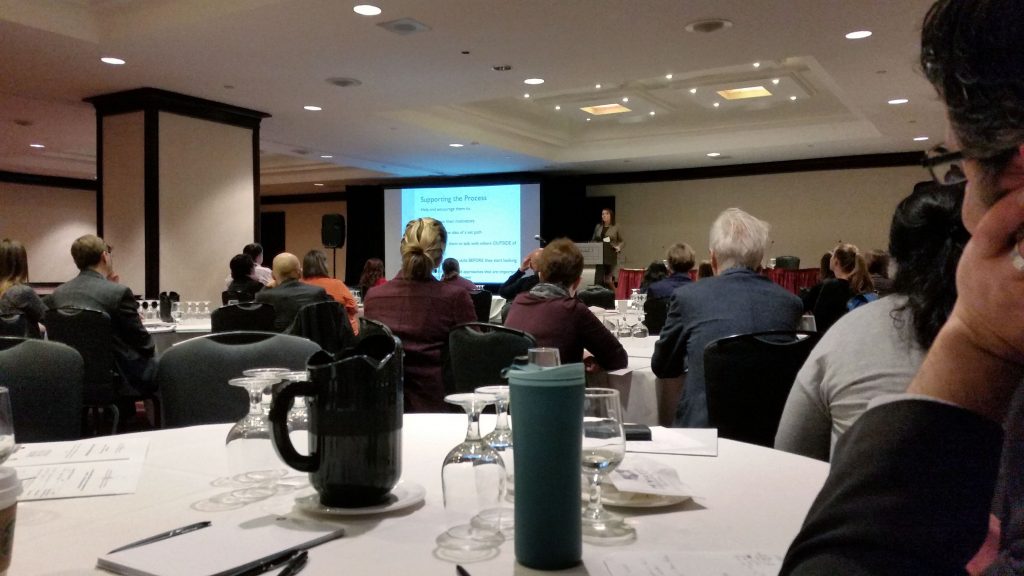 The conference was kicked off with an excellent keynote presentation from Trina Foster, the Executive Director at Ontario Centre for Workforce Innovation, titled “Beyond Academics, Life after Postdocing”. Her talk focused on the fact that the majority of postdocs will not end up in academic jobs, and that postdocs, their supervisors, and postdoctoral administrators need to recognize this reality, and start preparing postdocs for non-academic careers. Postdocs have a huge number of skills that employers are looking for – it’s a matter of learning how to properly sell yourself. There is a lot of training out there to help postdocs with this: check out the great training workshops offered by our own PDFO!

We also heard from Mahadeo Sukhai with a talk on “Trainees with Disabilities in the Research Enterprise: Myths, Misperceptions, and Resources”. Dr. Sukhai spoke eloquently on dealing with disability and accommodations in the workplace, from the positions of a student, postdoc and PI.

This was followed by a presentation from Timothy Burkhart and Mihaela Harmos from Western University on their efforts at Western in developing Individual Development Plans and implementing mentoring committees for all new postdocs at Western. These plans and committees aim to help better prepare their postdocs for finding careers and positions following their postdocs and ensuring that they are setup for future success.

The final presentation of the day was a panel discussion from representatives of the Tri-Council agencies: Patrick Couperus from SSHRC, Matt Vincelli from NSERC, and Tiffany Richards from CIHR. Each representative talked about their agencies strategic plans and initiatives for postdoctoral funding, as well as improving gender equity in research. There were a number of questions following the session on streamlining the application process, as well as funding periods. These are things the agencies are looking into, but had no concrete answers. One point of interest was that CIHR is discussing the possibility of developing a transitional funding award similar to the NIH K99 award, but this is in very early preliminary internal discussion, so don’t expect to see any applications for this any time soon.

Day 2 started out with a morning session on Research and Innovation with representatives from MITACS (Fiona Cunningham), the Ontario Centres of Excellence (OCE, Tania Massa), SPSCIP (Elissa Strome), and Fonds de recherche du Québec – Santé (FRQ, Anne Cécile Desfaits). The panelists spoke about the history of their organisations, and a little bit about the various funding opportunities they have for people in various provicinces. MITACS is the only fund available across Canada – OCE and SPSCIP are Ontario specific, and the FRQ is available solely to residents of Québec. 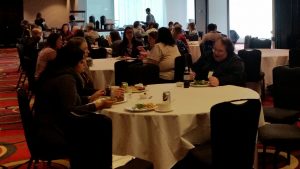 Lunch was sponsored by the Burroughs Wellcome Fund. Victoria McGovern, spoke about the many grants they have that are available to researchers working in Canada. She also mentioned their initiatives in increasing funding for under-represented groups in Science, primarily women and visible minorities. She also spoke about the transitional awards they offer that are designed to bridge the period between a postdoc and early career researcher.

The conference was brought to a close with the closing plenary on Innovation, Industry, and Research. This session combined talks from Lisa Cechetto from World Discoveries, Derek Newton from U of T Innovations, and Martin Blouin from INRS, all about the collaboration of academia and industry and their work to bridge the divide between university and industrial research.

Overall, the conference was a great experience, and I was glad to have the opportunity to represent the UBC PDA at both the CAPS AGM and CAPA conference. As before, if you’d like to become involved in the UBC PDA, have any questions, or would like to discuss things in more detail, please contact us!