Give your feedback to the Government of Canada on #YourBudget2018 and support science!

Earlier this year, the Fundamental Science Review released its report on how to enhance non-governmental research in Canada (more information here). The key recommendations included:

Although the Government of Canada has made progress on implementing some of these recommendations (e.g., by appointing Dr. Mona Nemer as Chief Science Advisor), and despite big campaigns from universities, advocacy groups, and students, there has been no commitment to increase research funding by a meaningful amount.

This is a crucial time, as the Government nears the end of its public consultation for Budget 2018.

What can you do to support Canadian research?

The Fundamental Science Review, often referred to as the Naylor Report, was released in April, making wide-ranging recommendations for improvements in Canada’s research climate. These include reorganised oversight, substantial increases in federal funding, and better working conditions and career prospects for early-career researchers. Read more about what it means for postdocs in our summary.

Some of these recommendations have been taken on board by the Federal Government, including the recent creation of a new Chief Science Adviser, and the formation of the Canadian Research Coordinating Committee. However, many of the issues raised by the Review are yet to be addressed – meaning Canadian researchers still need to engage with the public and their representatives to show that they support the Review.

You can speak up for science and make a difference – read our tips on how to write to your MP.

UBC has now fully endorsed the recommendations of the Fundamental Science Review – outlined on the website of the VP Research and Innovation. As part of the endorsement, they have launched a social media video campaign featuring UBC researchers explaining why their work is important and why they #SupportTheReport. Two postdocs, both on the PDA Executive Committee, have been featured in the campaign.

If you would like to be involved in the campaign, you can get in touch with the VPRI team through the link on their page (beneath the video).

Here are some tips for if you want to show support for the Fundamental Science Review by writing to your representative.

Suggestions on writing a letter to your MP, from Evidence for Democracy:

From Evidence for Democracy

Find your MP’s name and mailing address here:
(enter your postal code into the search box)

Note: you don’t need a stamp to send mail to MPs.

Now get writing and show your support for science! 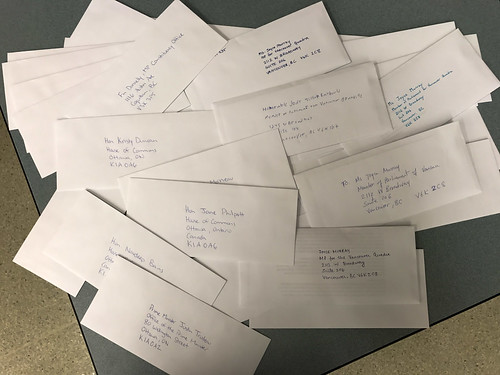 Canada’s Fundamental Science Review has been released, and it’s a crucial time for Canadian Research.

We asked Dr. Rachel Fernandez, Associate Dean for the Postdoctoral Fellows Office and Student Professional Development over at the UBC PDFO, why the Review is important for UBC’s postdocs. Here’s what she had to say:

Canada’s Fundamental Science Review, or ‘The Naylor Report’ as it has come to be known, outlines a comprehensive plan for the government to support Canada’s research ecosystem, including providing a much-needed boost to investigator-led research and to the training of graduate students and postdoctoral fellows. If implemented, the increased investment -spread over 4 years – would amount to an additional 0.4% of the national annual budget. This investment will make a difference. It will ensure that newly-minted and seasoned researchers will have their work, deemed to be outstanding by experts, funded instead of being buried because of insufficient funds. It will allow for more diversity in the research ecosystem – both in the type of research being done and the people doing the research.  It will increase our research capacity and provide more opportunities for nurturing innovation. Indeed, implementing the plan outlined in the Naylor Report would be an excellent investment in Canada’s future.

We also asked what action we should be taking:

It is important that we convey to our Members of Parliament, and the public, the value of not just our research but also the significance of the training that we have received and provide. It is also important to express our gratitude for the support that we currently receive. Consider using social media and/or writing to your Member of Parliament, the Hon. Kirsty Duncan (Science Minister who commissioned this report), the Hon. Bill Morneau (Finance Minister), the Hon. Jane Philpott (Health Minister), the Hon. Navdeep Bains (Innovation, Science and Economic Development Minister) and, of course, our Prime Minister. Tell them a personal story and why you would like them to #SupportTheReport as the #NextGenCanScience.

You can show your support for Canadian research and the Review by coming to the UBC PDA’s letter-writing party, co-organised with Future of Research Vancouver, on Tuesday, August 29.

We hope to see you there!

Photos of the event

Registration for this event is now closed.

You can still write a letter to show your support – find tips here.

The Fundamental Science Review has been released, and it’s a highly important time for Canadian scientists. Our representatives need to know the Report has the backing of the research community so that they can push for its adoption.

With Canadian MPs soon to return to Ottawa after the summer break, now is the perfect time to engage with them and show our support. It doesn’t matter if you’re not a citizen or even resident of Canada – living and working in BC means your views are important.

The UBC PDA is co-hosting a letter-writing party with Future of Research Vancouver to help you to contact your representative and ask them to Support the Report. Come along and we’ll assist with drafting your letter, finding the postal address for your MP, and even give you a stamp and envelope!

Drop in any time between 4pm and 7pm on Tuesday 29th August in room 1510 in the Life Sciences Centre. Please register if you plan to come, and don’t forget to bring your laptops!

We’ll have drinks and snacks to keep your energy up – including pizza and beer!

Organised in cooperation with:

The Fundamental Science Review, often referred to as the Naylor Report, was commissioned by the Federal Government to review Canada’s research, including basic and applied research in all disciplines carried out outside of government institutions. It summarises the current state of Canadian research, and makes wide-ranging recommendations for improvements going forward.

The executive summary provides a useful overview of the contents of the full Report, containing both a written account and a list of the major recommendations. Here are some of the key points:

Administration: The Review calls for greater cohesion, coordination, and accountability for Canada’s main funding bodies, namely the Tri-Council Agencies (CIHR, NSERC, SSHRC) and the CFI, through the formation of an overseeing National Advisory Council on Research and Innovation (NACRI), to replace the current STIC (Science, Technology and Innovation Council).
Funding: A substantial increase in federal research funding (30% higher than the current budget) is recommended, along with a rebalancing towards independent, investigator-led research (as opposed to targeted, priority-driven research). Adjustment of the distribution of funds is also suggested, with more emphasis on high-risk and multidisciplinary research, and a focus on areas that are currently considered underfunded including the social sciences, humanities, and mathematics. Greater and more consistent support for infrastructure and central facilities is also advised.
Personnel: Some of the common concerns for Canadian postdocs are recognised, including the confusing and inconsistent array of funding arrangements and values and the limited prospects for early career researchers. The importance of prioritising equity and diversity in recruitment and funding is also highlighted.

What does it mean for postdocs?

It is possible that some funding opportunities would be reduced in future years: a careful review of ‘matching’ arrangements, e.g., those offered by Mitacs, is recommended. It can also be argued that the Report does not go far enough to allow Canada to be truly counted amongst the world leaders in research.

However, the adoption of the entirety of the Report’s recommendations by the Federal Government would be of almost universal benefit to Canadian postdocs compared to the current situation, both for new recruits and for those who hope to continue their careers in Canada. As well as the obvious benefits of increased research funding, better consistency and clarity in the roles of the funding bodies and coordinated work towards defined objectives would make these funds easier to secure.

The recognition in the report of the problems facing postdocs and early career researchers is a good start. Issues such as the lack of enforced retirement for academics are raised, which will hopefully lead to improvements to the difficult career prospects that concern many of us.

What you can do

The response of researchers to the report has been centring around #SupportTheReport. It is crucial that Canadian researchers convince the federal government that implementing the recommendations of the Naylor Report will benefit both the research community and Canadian society in general.

The most important action you can take to Support the Report is to contact your Member of Parliament.  The UBC PDA, in cooperation with Future of Research Vancouver, hosted a letter-writing party on Tuesday, August 29 at 4:00 p.m, in Room 1510 in the Life Sciences Centre. You can still write a letter to show your support – find tips here.

Read what the UBC PDFO Associate Dean had to say about the Review.

For ideas about how you else you can Support the Report, check out the campaigns linked below.

Campaigns:
Summer of Science – very useful guide for engaging with your representatives about the Naylor Report
Evidence for Democracy – guidance for writing to your representative
Students 4 The Report – a student-led campaign supporting the Report
Next Generation of Canadian Science – A Twitter campaign led by the Canadian Society for Molecular Bioscience The Canadian Association of Postdoctoral Scholars (CAPS) has released the results of the 2016 Canadian National Postdoc Survey.
Of the over 2,100 participants, 136 were affiliated with UBC, which was the highest number of any institution (way to go, UBC postdocs!).  Some key findings of the survey:

In spite of the fact that many postdocs are now in their mid-30s or beyond, there is a widespread lack of access to government benefits that afford most other Canadian workers paid parental leave, employment insurance, and access to the Canada Pension Plan.  (Please note: at UBC all postdocs are eligible for paid maternity leave, but this is not the case at most Canadian universities.)  In addition, many postdocs are living far away from their support networks and dealing with stressful job situations, which may negatively impact their mental health.

To read more about the survey results, please visit the CAPS website:
http://www.caps-acsp.ca/en/2016-canadian-national-postdoctoral-survey-results/

Are you concerned about the status of postdocs in Canada and wondering how to take action?  Here are some ideas:

Members of the UBC research community across every discipline, including postdocs, are invited to participate in a campus-wide consultation to share their advice and perspective on the input UBC provides to the federal government on its Review of Fundamental Science in Canada. UBC is seeking input on the questions pertaining to scientific research in Canada, such as:

If these issues resonate with you, please attend the roundtable meetings, planned as follows:

Please express your interest in participating in one of these roundtable sessions via the form here.

Alternatively, you can contribute through a direct written response to the Fundamental Science Review here through the Government of Canada.

If you’re interested in Postdoc taxation issues and the cases of those who are being retroactively taxed by the CRA, CBC in Montreal did a radio show on the topic a few weeks ago.  You can listen to it here: