“What am I doing here? Reflections after the book signing at IndigoSpirit Mount Sinai Hospital, Toronto

Everything seemed so terribly wrong… but I was wrong! 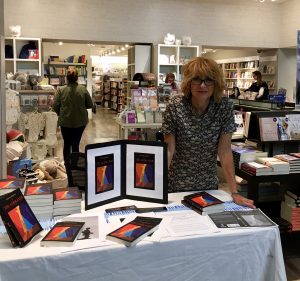 Bruce Chatwin’s memorable question came to my mind when, two days ago, I looked at myself standing at the entrance of IndigoSpirit Mount Sinai Hospital bookstore where I was supposed to sign copies of my novel “The Afrikaner”.
The bookstore is indeed located in the lobby of Mount Sinai Hospital in Toronto. As much as I think that providing books to people needing to evade from pain, grief, and anguish might be a good idea, that day I couldn’t really see myself promoting my book there. I watched people pass by and all I could think of was that they might be too sick, too desperate, too lost to be bothered by an unknown writer and her unknown book. But I was wrong. The moment I engaged those passers-by in conversation, I understood how in fact my luring them into a world of words and African landscapes worked for them as a balm, a sudden respite from their troubles, and an unexpected communion with another soul.
It was a heart-warming experience. Among the people who bought the book and asked me to sign it were: a lady who had just been told she had got rid of her cancer, a doctor who had worked in emergency in Africa, a retired nurse who still felt part of Mount Sinai community, an Italian psychiatrist who had spent more than 30 years in Canada, a bookseller who looked like an angel, and a film producer – traveling incognito – who asked me the classic question: “Why should I read your novel?”
I thank my publicist Anna van Valkenburg for having organized this book signing event and IndigoSpirit bookstore for having hosted it.