Say No to Iron Fertilization… For Now

Posted by aguile in Opinion Pieces

The idea that iron could curb the effects of increasing anthropogenic carbon dioxide in our atmosphere has sparked worldwide intrigue, but right now our understanding is far too limited and large scale implementation will do more harm than good.

What on Earth am I talking about? Well, I’m not talking about earth; I’m talking about water and the idea that if we promote algae growth through the use of dissolved iron sulphates we could transfer carbon dioxide from the atmosphere into the ocean (Buesseler et al. 2008: Powell, 2008). The hope is that this would mitigate the effects of climate change. Allow me to explain. Primary producers need certain nutrients to undergo photosynthesis. If one of these is missing they become unable to grow. This is called the limiting nutrient. In the ocean it has been found that regions with otherwise high nutrient content still have low chlorophyll outputs at certain times of the year due to low concentrations of iron (Law, 2010). In these experiments chlorophyll is used as a proxy for  biomass of primary producers. Fertilizing these zones with iron causes a surge of photosynthesis and growth in phytoplankton creating an algae bloom. Photosynthesis utilizes surrounding carbon dioxide and it becomes incorporated into the composition of phytoplankton.

There are many different species of phytoplankton and they all vary in size and composition. For example, diatoms are a larger variety with heavy silicated walls. These sink quickly and bring sequestered carbon with them.  Smaller species are consumed by zooplankton and other organisms who occupy higher trophic levels. When they defecate or die carbon is transported to the ocean bottom (Powell). And voilà: carbon dioxide has been taken from the atmosphere and brought down to the depths of the ocean. Out of sight, out of mind. 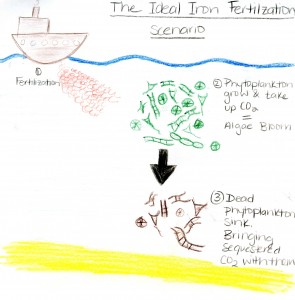 Trust me, it’s not as great as it sounds

This method of carbon sequestration appears to have potential. There have been 12 major field programs with small scale releases of Carbon since 1993 (Buesseler et al.). These have deepened our understanding of the importance of iron in the carbon cycle and in regulating ocean ecosystems but the key here is that in order for any significant change to occur there would need to transfer this to an incredibly large scale over a long period of time (Aumont and Bopp, 2006).  Think 100 years. Iron would need to be added continuously and increasingly, otherwise a large portion of sequestered carbon rapidly returns to the atmosphere (Aumont and Bopp; Gnanadesikan et al., 2003; Sarmieno and Orr, 1991). Over the 100 year time frame this would be impossible.

If the logistics weren’t enough to deter any potential action there is also the fact that we still do not know exactly what happens with the sequestered carbon or the biogeochemical and ecological effects it could have (Aumont and Bopp, Law, Bueseller et al.). Aumont and Bopp suggest that side effects (such as anoxia or hypoxia in the pelagic zone and the deep ocean) could partially or totally cancel out the intended benefits. Ocean water is continuously circulating which means that long lasting effects on marine resources can occur even a great distance from the injection site. The extent of this is impossible to predict (Aumont and Bopp, Bueseller et al.).

We must also keep in mind that iron is not always the be all and end all limiting factor. Low light availability often results in small chlorophyll yields. This becomes especially important once blooms become large and the phytoplankton begin to shade each other. Silicon has also been found to be a limiting nutrient in some regions; for diatoms in particular who have silicated cell walls (Aumont and Bopp, 2006).

The take home message  here is that the uncertainty surrounding large scale iron fertilization is much too great for it to be a viable carbon sequestration method. Until we can deepen our understanding to a point where we are confident in our actions or at least understand the inherent, often unpredictable, risk in these actions iron fertilization should remain small scale and experimental.