Last week, one convention that stood out for me from the presentation of Japanese garden given by Mr. Sugiyama is the use of odd numbers, specifically the numbers seven, five and three.

We were unable to easily track an academic, religious or philosophic reason behind this convention, but Mr. Sugiyama mentioned how there was a form of beauty behind the odd numbers and their irregularity when they are situated in an environment that is man-made. In order words, the irregularities of this convention offer a more natural aspect to something that is structured (i.e. the tea house, the location of the garden itself, etc.). This way the whole garden offers an interesting balance between elements of nature and art as well as attracting the eye of the visitors to certain details that, if they were all symmetric, would go unnoticed.

With that in mind, I strolled in the Nitobe Japanese Garden at UBC and suddenly noticed more clearly the different arrangements with the numbers seven, five and three.
Right as you enter the garden, five rocks are displayed in an irregular pattern in the moss. I also saw a pagoda-looking rock with seven layers. Then, as I continued walking in this chisen kaiyuu style garden (the garden has a path on which one can stroll around a pond) I noticed a clear group of three trees. What is interesting at this point is how I first could not see the rock plate, but as I kept walking it appeared in sight. 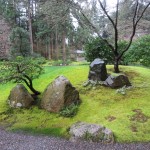 The five rocks at the entrance 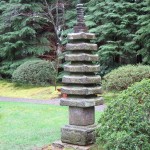 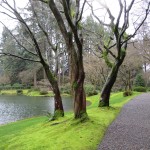 The three trees when the plaque is hidden 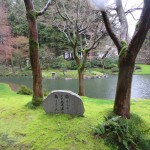 The three trees offering a new perspective with the visible plaque


At this moment, the meaning of the beauty in the irregularity became clearer to me. My understanding of it could be wrong, but what hit me is how those odd numbers and their arrangements shape our perspective. Indeed, they might break regular patterns, but they also offer new ways of seeing.

For example, the small island-like area in the garden has three different trees planted in a way that as you walk around the pond, you are seeing different scenes. Think about it, if the trees had been aligned in a straight line the scene would have been appreciated mainly from one angle only. However, the odd numbers and their irregular arrangement are displaying a form of natural beauty in all its angles. 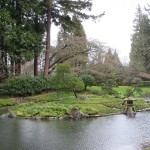 One scene of the ”island” 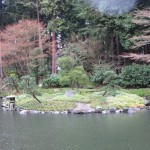 During my visit, the weather challenged me a little in my observations, but I am excited to go back to the garden when nature will be in full bloom and also when it will not be raining as hard to see what are the new scenery displayed in the garden.

Hope you all get to visit the Nitobe Garden soon if you have not seen it yet!