Posted by russell chiong in Uncategorized

If you think back to the last time you ate fish, would you be able to say for certain what it was and where it came from?  Here in Canada, your chances are pretty unlikely.

Canadian regulations on seafood only require labelling that includes the common name and geographic information of where the product was last processed.  Key pieces of information including the scientific name, production method (wild-caught or farmed), and geographic origin that are required elsewhere, like in the European Union, are not required in Canada, leaving consumers in the dark about the fish they buy.

What information that is available in Canada is often of little help to the consumer, as generic common names are often regionally specific, and can be applied to multiple species of fish simultaneously, even if they aren’t closely related and despite varying ecological and conservation statuses. 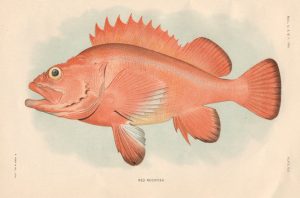 Yelloweye Rockfish (Sebastes ruberrimus), one of at least 5 species classified under the Canadian Food Inspection Agency (CFIA) Fish List as ‘Red Snapper’.  It is currently considered of Special Concern (Image from Department of Commerce and Labour Bureau of Fisheries, 1907).

A report by SeaChoice indicates that over 200 species of fish can be labelled as ‘snapper’ in Canada, but this likely includes the variations of ‘snapper in common names, such as ‘Russell’s Snapper’ (Lutjanus russellii), ‘Pacific Snapper’ (Sebastes spp., Sebastolobus spp., or Lutjanus sanguineus), and simply ‘Snapper’ (species from 13 genera are referred to by this common name).  While SeaChoice’ assertions could be seen as exaggerated, they highlight the confusing nature of common names and labelling practices for fish in Canada that can confuse consumers and make it difficult for them to discern whether the fish they eat are coming from sustainable fisheries or whether their choices are harming already vulnerable species in the wild.

While inclusion of the scientific name or taxonomic serial number already required by the CFIA in fish labelling would help with traceability and consumer transparency, these rely on the accuracy of existing labels for fish, an issue called into question by Oceana in 2018, and a study in Food Research International, also in 2018.  Oceana, whose tactics and sampling method have been called into question (by a group funded in part by fishing companies, however), report that approximately 44% of samples were mislabelled, while the study in Food Research International places the number closer to 32%.  Regardless, the unreliability of seafood labels makes it difficult to see what help more stringent requirements on the information presented might offer.

Seafood in Canada currently requires only 2 pieces of information on the label: the common name and the country where it was last processed.  While these can give the consumer some idea of what they are eating, they don’t tell the full story, and the story they do tell isn’t guaranteed to be accurate.  Labelling with the scientific name would give consumers the opportunity to know what species they are eating and the kinds of fisheries involved, while harvest or production method and geographic origin could further help with informing consumers about the impacts of their consumption, all to the effect of allowing conservation to be taken incorporated into everyday decision-making for the general public.