Along South Asia’s (SA) coasts, recent population growth, land subsidence and habitat degradation have increased the risk of coastal floods (Vinke et al., 2017). This risk is expected to be further heightened by projected increases in sea-level and storm frequency. By 2030, 225 million people are estimated to reside in SA’s low-elevation coastal zones, making the need for coastal flood management greater than ever (Neumann et al., 2015).

In the past, coastal flood management in SA has typically involved the construction of dams, dykes and seawalls (Brears, 2015). Recently, however, more nature-based flood control measures have been implemented, such as mangrove forest restoration and preservation (Kodikara et al., 2017). Mangrove forests—which consist of trees and shrubs adapted to marine environments—protect coastal communities from flooding through wave-attenuation (NOAA, 2017)

Leading SA’s mangrove restoration efforts is Sri Lanka, which adapted the flood control measure in wake of the 2004 Indian Ocean Tsunami (Kodikara et al., 2017). Over 60 mangrove conservation initiatives have been launched in the recent 15 years—the most successful of which is the Sri Lanka Mangrove Conservation Project (SLMCP).

The SLMCP began in 2015, following a partnership agreement between Sudeesa (a Sri Lankan NGO), Seacology (an American non-profit organization) and the Sri Lanka government (Wickramasinghe, 2017). In this agreement, the 3 partners committed 5-years to protecting all 8,815 hectares of Sri Lanka’s existing mangrove forests and replanting an additional 3,885 hectares using nursery-raised mangrove seedlings (Seacology, n.d.). 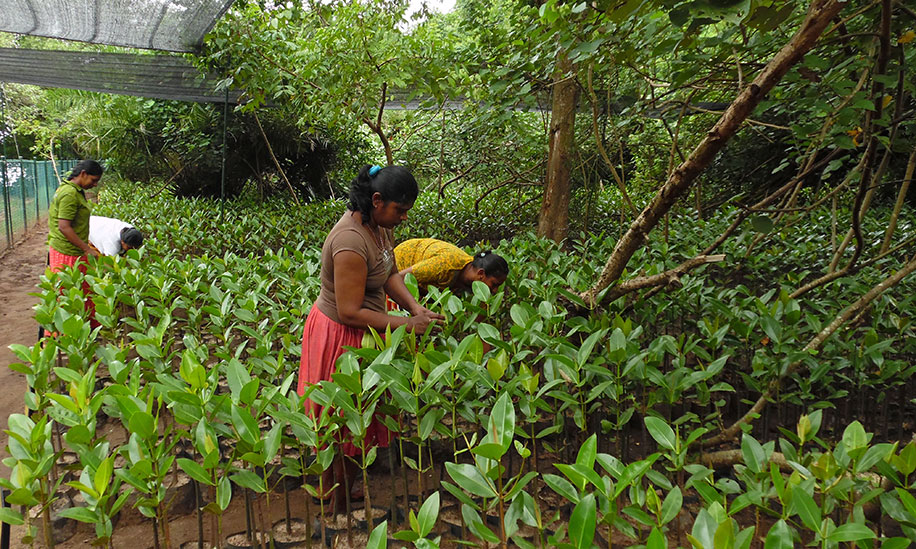 Sudeesa and Seacology have contributed towards the SLMCP’s goals by setting up an incentive program directed at impoverished women and youth in small coastal communities. In this program, participants attend mangrove conservation workshops and commit to restoring and protecting their local mangrove forests (Wickramasinghe, 2017). In exchange, participants receive alternative job training and microloans to develop or expand their own sustainable businesses. As of 2017, the program has provided 7,900 women and youth with alternative job training and 2,893 women with microloans. In exchange, these women and youth are protecting over 5500 hectares of mangrove forest and have planted over 700,000 mangrove seedlings (UNFCCC, n.d.). To see this program in action, check out the following video:

The Sri Lankan government has contributed towards the goals of the SLMCP through legislation and regulation (Wickramasinghe, 2017). For example, the Sri Lanka government has provided legal protection for all national mangrove forests as well as rangers to patrol the mangroves and enforce protection. In addition, the government has demarcated and gazetted roughly 21 hectares of mangrove forest to each coastal community participating in the incentive program (UNFCCC, n.d.).

Despite a 5-year timeframe, the SLMCP will have life-long societal and ecological benefits for Sri Lanka. Stable mangrove forests will help protect coastal communities from flooding and provide habitat for a large diversity of marine and terrestrial life. Furthermore, provision of sustainable livelihoods will improve residents’ quality of life and minimize future mangrove exploitation.