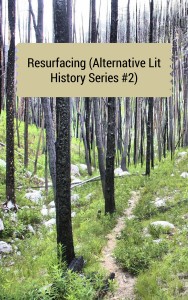 The story “Resurfacing (Alternative Lit History Series #2)” began as a personal challenge…and a simple reaction to the fact that, historically-speaking, there are virtually no representations of homosexuality in Canadian literature.
The personal test involved writing outside my customary range (in terms of: vocabulary, themes, interests) and appropriating the syntax, metaphors, style, and preoccupations of a canonical figure in CanLit (Margaret Atwood, that is, circa 1970). The challenge extended to form as well, compressing Atwood’s lean-but-complex novel Surfacing into a hulking short story.
As literary ‘activism’ I decided to present the story as though it had actually been written in 1970-1 (as Surfacing was), but with a perspective that would have never been published at the time: instead of relating a tale about two female-male couples that travel to a family cabin in remote central Canada, I substituted two male-male couples. Oh, right: I also switched the setting to a lakeside cabin in rural northern B.C.
From there, and while trying to maintain some proximity to Atwood’s national literature-defining plot schematics, I let the characters’ political views, gender, and social/psychological milieu impact the story’s trajectory. (Recall that in May of 1969—nearly two years after San Francisco’s legendary Summer of Love—Canada’s Criminal Law Amendment Act, which decriminalized homosexuality, passed into law.)

Running over 7,000 words, the story ended up far too large for publication in most literary journals. It also turned out decidedly, well, odd. (Likable and interesting too, I’d say, but what parent doesn’t say that about their offspring?) In being relatively reliant on a reader’s knowledge of Atwood’s novel, I expect the story could come across as both an academic exercise and an overly literary one. Still, I think the entire effort was worthwhile.
I was thrilled, then, to hear positive words from Plenitude Magazine. Now I’m equally thrilled to see it printed online in Issue #3, wrapped by an attractive cover, and jostling next to other respected Canadian writers like John Barton, Amber Dawn, and Daniel Zomparelli. Below, there’s an excerpt from the story. Plenitude Magazine‘s subscription price of $10 for two issues is a bargain, especially when you consider that you might have spent $12.75 this past summer for the 90 minutes of forgettable Hollywood studio product called The Lone Ranger. (Or After Earth.)
Buy Canadian, think local, support the arts? —> Plenitudemagazine.ca Refusing to acknowledge where you come from . . . is an act of   amputation:
you may become free floating, a citizen of the world   (and in what other country
is that an ambition?) but only at the cost   of arms, legs or heart. By discovering
your place you discover yourself.   —Margaret Atwood, “Travels Back” (1973)

The Germans did not plan for this godforsaken stretch of road when they designed the Type 3. Washouts and frost heaves season after season and, with luck, sun-baked crews shoveling in repairs over eye-blink summers: the situation’s worthy of a vengeful Zeus. Granted, patches of new highway are professional—black, lined, flat. In another winter or two they’ll be indistinguishable from the rest.
When Andrew and David arrived in the city, David told us he’d taken the Squareback off blocks, where weeds had forested its porridge-coloured chassis for the better part of a year. Corroded spark plugs needed changing, but otherwise the car was set for the trip. Dependable. Northward along three hundred miles of potholes and crumbling shoulders, though, we noticed the exhausted springs; as the landscape steadily flattened—pitted against almighty weather, groves become stunted and bent—the metal interior squeaked with complaint. Our backs ache; and now we all understand how riding in a tank must feel.
I’ve pointed out landmarks, such as they are: a deep bowl of burnt trees, abandoned or iffy tourist attractions, roadside grave markers with plastic lilies and bleached leaves. Andrew and David, homesteaders on an island near Nanaimo with a once-a-week ferry, blanch at open mine pits and sawn firs piled up like toothpicks. “Man, at the rate they’re going—,” Andrew says, accusing eyes addressing the rear view mirror.
David finishes the thought. “There’ll be nothing but wasteland by 1975.”
“We can always start over again, build a road into virgin territory,” Ben says. I can’t tell if he’s serious. Staring outside at the expanse, he could pass as a latter-day explorer measuring contours.
On the rear bench, stiff and built for offspring, Ben and I are folded like lawn chairs. He rests a hand on my thigh, periodically strumming the corduroy’s ribs.

The outskirts motel—a roadside signpost for the town before the lake—has shrunk into a vestige: a partial maze of scorched concrete foundation. “That’s new,” I say as we speed by.
In afternoon’s fading light the boxy, uninviting outpost appears empty. With deer flies and mosquitoes swarming, there’s no good reason to soak up atmosphere; the Great Outdoors of tourist brochures cannot be fully trusted.
The car’s silence reflects expectance. I’m the soul compelled to revisit and tie up loose ends; it’s me whose childhood charted the district. They’re guests. I need to direct: “Turn right” or “Ahead to the stop sign.”
But alongside me the place has changed. “Pull over there.” I nudge David’s shoulder and thumb toward the general store.
David swerves, no signal. As a driver he wouldn’t be my first choice; still, when he’d offered, muttering about island fever and damned hippy families, I’d been grateful. Compared to a bus or hitching, a cramped station wagon feels deluxe.
The company’s a welcome distraction too, likewise the absence of questions.
Draft lottery refuseniks and “Eureka Valley fairies” fired up by Haight-Ashbury be-ins, the island dwellers have rejected nationality altogether. Family spurned them both years ago.
Unwilling to settle down with any of the nice girls his mother unveiled like bribes once a month, Ben fled for a promising coast with scant history to avoid hurt feelings and the miasma of parental despair. The inertia of routine, including me, holds him in place.
“I’ll be back in fifteen or so,” I say. “There’s a beer parlour if you want. I can’t guarantee you’ll make friends there, so watch your steps.”
“I should snap some photos at least,” David says. “Document our On the Road highlights. And with this fetching ensemble”—the smiling gesture runs from ruddy logging camp beard to plaid flannel shirt—“fitting in won’t be hard.”
“Yeah right, Mary. Just keep your trap shut,” Andrew says. No one doubts the risk of conspicuousness here.