“The best way to predict the future is to create it.”

This quote by Alan Kay has been my personal motto for a while now, and hearing UBC president Stephen Toope use it during his speech yesterday at Imagine Day only reinforced my belief that I’m meant to be here. Never in my life have I felt as completely and utterly inspired, so motivated and powerful as I did during the UBC pep rally. But I’m getting ahead of myself. 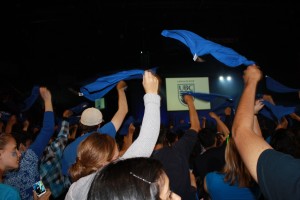 Science UBC: We whip our towels back and forth.

Obviously, being as clumsy and directionally challenged as I am, I started Imagine Day off by getting lost on the way to meeting my MUG group (shout out to Strontium and squad 53!). Who knew that Thunderbird arena and Thunderbird stadium are two completely different places? But at least I got to cross out #13 on the Ubyssey’s list of 93 things to do before you graduate. I eventually found my group though, and we began to swarm campus in a sea of blue. After playing the classic icebreaker games and learning the science cheers (the clear winner out of all the faculties, if I do say so myself. I still can’t get it out of my head. What what what we’re science!) we headed off to meet the Dean of Science, Simon Peacock, who got us all fired up about being a part of the best faculty at UBC. This was followed by a Student Success Workshop in which we learned about all the academic resources that are available to science students, such as SciTeam, SPAC and Science Advising, and then a tour around campus. But it was what came after lunch that I was really looking forward to: the Imagine Day pep rally. Picture an Olympic hockey arena filled with thousands of new students, all dressed in their bright faculty colours, most with their faces (and bodies, occasionally) painted, cheering and whipping I AM UBC towels over their heads. The excitement was pure insanity, and I was seriously concerned that my teeth were going to fall out from grinning.

However, my favourite part of the pep rally wasn’t cheering so much that I could barely speak today or singing along to Oh Canada with Mark Donnelly (I might have to become a Canucks fan after all), nor was it watching the deans march onstage to the Darth Vader music from Star Wars. The moment that really affected me was Professor Toope’s address (and not just because he made fun of a certain school from near my hometown). In his speech, he encouraged us to make the most out of our university experience, to get involved and to take chances. He spoke about the importance of creativity and imagination, and how both of these will be essential tools for our success over the next four years.

The fact that the president of the school wanted us to become as involved as we could, to get the most out of our university experience, really showed me just how much UBC cares about its students. At other schools, I know that I would be one of over 1600 other first-year science students, namelessly lost in the crowd. But not here. While UBC is a huge, sprawling school and I’m just a lowly first year, I don’t find myself feeling overwhelmed, because UBC isn’t just a school, but a community hundreds of thousands strong, all with the same drive and the same Thunderbird pride. Everyone here seems to know, as I do, that we all have the potential within us to do all that we imagine.

That’s all for now, I’m off to dinner in the Vanier commons block and then I plan on hitting the Firstweek Indoor/Outdoor Pool Party. Word on the street is that it’s gonna be pretty legit, possibly even legendary. Expect a blog post on rez life, Firstweek, classes and other fun shtuff later this week. Until then, I’ll be off imagining and creating as much as I possibly can.

This entry was posted in Involvement. Bookmark the permalink.

4 responses to ““The best way to predict the future is to create it.””