It’s Friday, Friday, gotta get down on Friday… 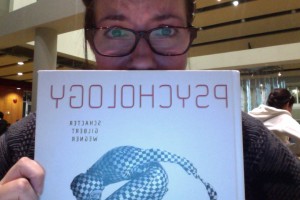 So what are you doing on this lovely Friday night? Going to a concert? Watching a movie with your friends? Partying like your life is a Katy Perry and/or Rebecca Black song? Well, if you’re me, the answer to that question is a boring one: I’m currently sitting at a semi-circle shaped table on the fourth floor of Irving, taking awkward Photo Booth pictures (bringing my laptop with me was a bad idea…) and trying to force myself to open my dauntingly thick psychology textbook. That’s right, midterm season is upon us.

Things that suck about this week: I’m missing out on Day of the Longboat, which is something I was really looking forward to. Actually I’m pretty much missing out on having a social life at all this week (although I’ll admit I was kidnapped to Triple O’s before heading over to the library. What can I say? I’m powerless before a basket of sweet potato fries and chipotle mayo.) I probably won’t be getting much sleep and will end up doubting my intelligence and sanity by the time this week is over. It’s going to be rough.

However, I think now would be a perfect time to remind myself of all the good things that happened to me over this past week. So, without further ado, here are the small joys of midterm season:

Okay, enough procrastinating. It’s time to teach myself the anatomy of the central nervous system. Did you know Irving is open until 1 am? I guess you know where to find me for the next week. I’m the girl on the teal MacBook with the messy high bun on her head and the permanent stress crinkle between her eyebrows. Good luck on your midterms everyone!

This entry was posted in Academics, Wellness. Bookmark the permalink.

4 responses to “It’s Friday, Friday, gotta get down on Friday…”