What I do in chemistry 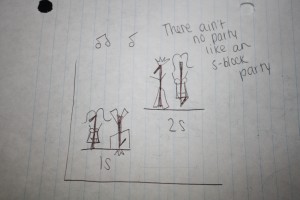 They’re electrons that are getting excited…get it? I also may or may not have made up an accompanying parody song about the s-block elements to the tune of “S Club Party”. Sometimes I swear, I’m too nerdy to function. Don’t worry though, I get real studying done, too.

Random pun of the day: What do you call a cat who raps? Whiska Lifa. (Shout out to my friend Sarah from Toronto who tweeted this last week and caused me to collapse into hysterical laughter in the middle of one of my lectures.)

Album(s) of the day: Take Care by Drake and the slightly less hyped but equally awesome Camp by Childish Gambino (aka Troy from Community), which both came out today. I’ve been listening to these two albums non-stop in the floor lounge today in an attempt to convince people that I’m way more gangsta than I actually am.

This entry was posted in Academics, Residence Life. Bookmark the permalink.