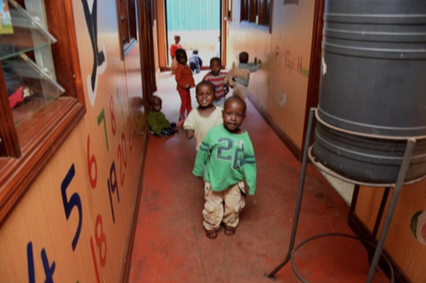 It is Friday morning, and I am walking an unfamiliar route along the Kenya-Uganda railway that bisects Kibera. A big, jovial man named Francis is acting as my guide this morning, chatting with me and stopping to greet various friendly faces along the way. Francis is a Community Health Volunteer with CFK, who goes out into the village of Kianda and educates households about proper hand washing, hygiene, and maternal and child health. He was chosen for this role because he is a prominent and well-respected member of the local community – “I’ve lived in Kibera for 30 years,” he tells us proudly. The Community Health Volunteers also assess the nutritional status of children under five, and refer those who may be malnourished to the CFK Nutrition Centre, where we are headed now.

The building is a one-story wooden building with two offices, three playrooms, and a kitchen around the back. We walk into the closest playroom, where about fifteen young children between the ages of six months and three years are waiting for me. A nutritionist named Esther, wearing a large CFK logo-emblazoned apron, is setting up a scale to begin the children’s weekly weighing. She invites me over to help out. Many of the children are unable to stand, either because they are too young or because their developmental milestones have been delayed from malnutrition. Esther has me stand on the scale and hold the child in my arms. Meanwhile, Esther takes the child’s left arm and measured their mid-upper arm circumference – a tool that gives a good idea of how thin or “wasted” the child is. The information is recorded in a little notebook, and the process is repeated with another child.

The children spend the majority of the day in this little playroom, most of them napping away on large spongy mats strewn about. Other more adventurous ones go for strolls around the rest of the centre, or watch the educational children’s videos playing on the television. The day is interspersed with snack times, wherein the children are fed various therapeutic foods including Plumpynut, a peanut butter and sugar concoction to help them gain weight. They also get a big delicious Kenyan lunch of ugali, spinach, and chicken.

After lunch, a little girl named Isabella* who had been napping for most of the day woke up. Veronica, one of the centre’s early childhood educators, asks me to give her some porridge. I pick her up, and am amazed by how light she is. Her arms and legs are so small that I can wrap my entire fist around them. She looks like she’s about six months old, but to my shock, Veronica tells me that she is nearing her first birthday. Stunted growth is a very common effect of chronic malnutrition, and many of the children in the centre look much younger than they actually are. Isabella has a good appetite, though – she wraps her tiny hands around the cup and eagerly drinks all the porridge without any complaint.

Isabella’s mother stopped feeding her breast milk after two weeks, because of a pregnancy with another child. (In the mother’s culture, breastfeeding while pregnant is believed to be detrimental to the developing fetus.) Instead, she started feeding Isabella warm water and cow’s milk, which has led to her becoming underweight and suffering from multiple nutrient deficiencies. The hope is, though, that after the prescribed eight weeks in the in-patient program Isabella will be back at a normal weight. Furthermore, her mother will have a better idea of how to take care of her and her future sibling – the parents of the children enrolled in the program receive training sessions, where they learn about young child nutrition and how to keep their babies healthy.

The Nutrition Centre is a relatively recent initiative by CFK, having recently celebrated its one-year anniversary. Although the program has been touted as a success so far, they are still in need of a lot of help – mainly, with organizing the massive piles of data they have accumulated since the centre’s opening. That’s where I come in. Over the next few months, I will be organizing the data in the centre and tracking individual children’s progress, as well as creating documents outlining the procedures of the centre. These documents will help ensure the long-term success of the centre, and allow the CFK staff to more effectively care for children along their road to recovery.

Alright, and maybe I’ll end up playing with adorable babies sometimes, too.