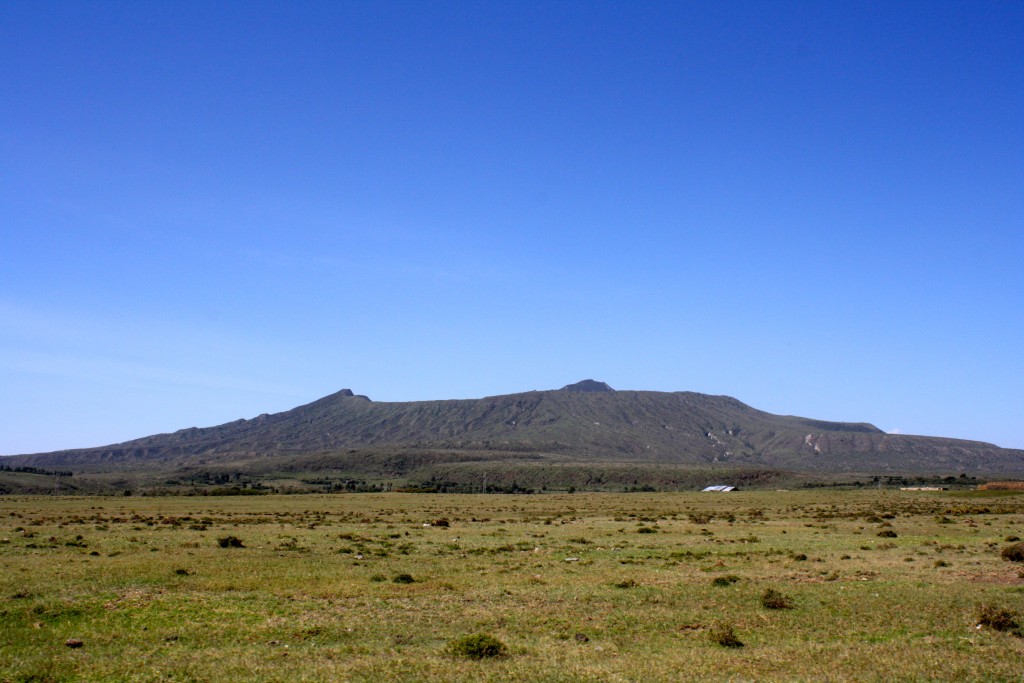 The matatu drove along the winding highway, shaking from both the bumpy road and the loud Swahili music blasting from the speakers. A friend and I sat cramped in the second row of the minibus with our belongings creating a little fort around us, watching out the windows as the billboards of the city gave way to the countryside. Street vendors selling Masai blankets and cobs of roasted maize blurred as we passed by.

We were off on our first trip out of the city, bound for Naivasha, a little town an hour and a half north of Nairobi. Naivasha, however, was just a quick pit stop as we headed towards our final destination. This destination appeared to the west as the matatu crested a large hill, standing out impressively amongst the parched grasslands of the Great Rift Valley. Mount Longonot, a long-inactive volcano with a crater a kilometer in diameter at its peak, was beckoning us. By the end of the day, I thought excitedly, we will have seen the view from the top.

Getting to the mountain proved to be a bit of a challenge. Since there were no matatus that would drop us off directly at the park gate, we opted for a cab ride with a friendly yet alarmingly pushy driver named Sammy. He offered to wait while we climbed the mountain and to take us to our campsite on Lake Naivasha afterwards, and while the price was a little steep, I agreed for the sake of convenience (and because it meant I wouldn’t need to carry my camping gear up the mountain).

The hike was much tougher than I had anticipated. The dusty trail leading up towards the crater had very little traction, and was on a steep incline. I found myself breathing heavily within a few minutes, my legs burning with effort and my face dripping with sweat in the Kenyan heat. Along the way, I found some more hiking companions in a school group. They were a group of girls climbing Longonot to prepare for their trek up Mount Kenya at the end of the year. Many of them were more out of shape than I was, which I must guiltily admit made me feel relieved. 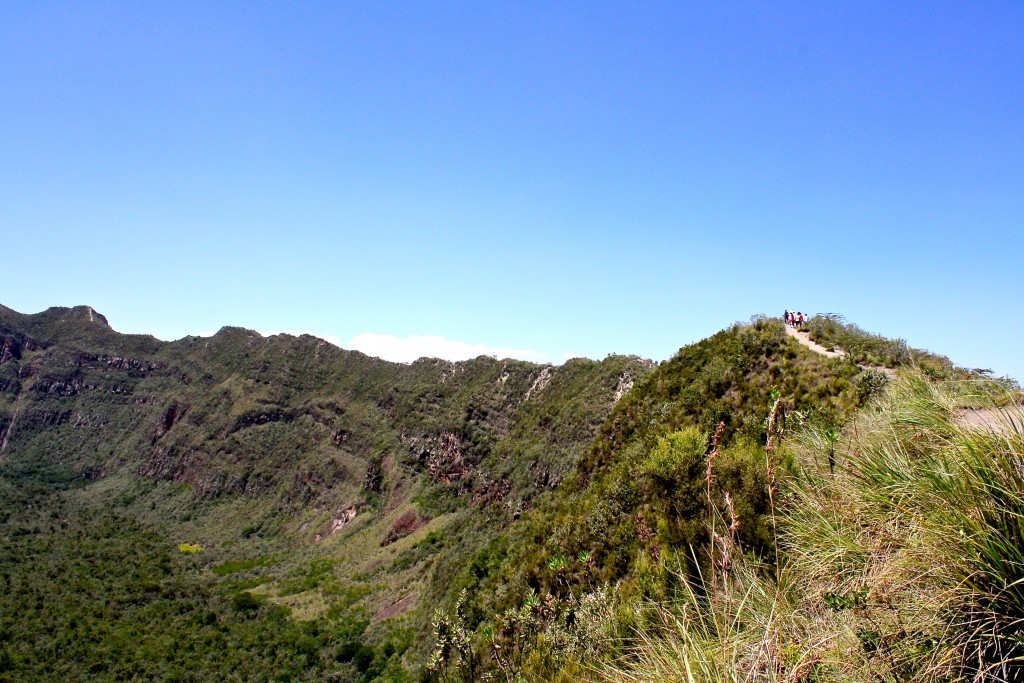 After losing half of my body’s water content in sweat, I finally reached the summit. The crater was even more impressive than I had imagined, tracing an almost perfect circle out of the mountain’s rock. In the forest far below I could see tree branches rustling, hinting at the presence of animals in the enclosed mini-ecosystem. Beyond the crater’s edge, the Great Rift Valley stretched out in all its yellow-green glory. I stood there at the top for a while, beaming with awe and endorphins, and exchanging high fives with my high school climbing buddies. My friend and I sat with our legs dangling into the crater, snacking on Chex Mix and looking down at the forest below. We contemplated making the two-hour walk around the crater rim, but since I had run out of water I was hesitant to spend any longer in the sweltering heat than I had to. We snapped a few top-of-the-mountain victory shots and descended back into the valley. 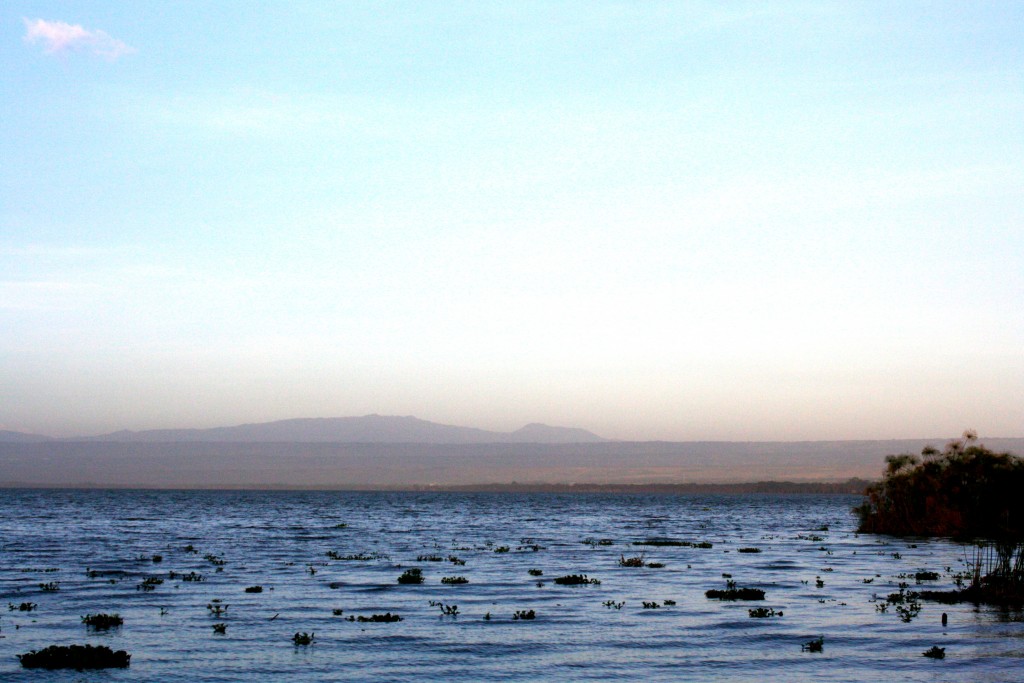 Lake Naivasha, where hippos are sneakily hiding out of sight

Sammy dropped us off at Carnelly’s Camp, an adorable campground on the shores of Lake Naivasha filled with expats and British vacationers. Exhausted from our trek, the first thing we did was gorge ourselves at the campsite’s restaurant. I scarfed down a massive pile of pasta with the signature Lake Naivasha crayfish, in a way that made me thankful the restaurant was empty. After dinner we pitched our tent and took a walk along the shore, spotting monkeys playing in the trees, blue herons standing elegantly in the shallows, and massive hippos peeking out from beneath the lake’s surface. It was the perfect place to end the day, and that night we fell asleep to the sounds of hippos snorting just feet away from our tent.

This weekend was a much-needed escape from the urban chaos of Nairobi. In Kibera, there are people absolutely everywhere – walking down the narrow dirt streets, crowded onto tiny matatus, calling out at you from storefronts. Even at nighttime, the slum doesn’t sleep – the sound of music, barking dogs, and rumbling trains can be heard through my open windows. Spending some time outdoors gave me a respite from the city’s chaos, which I hadn’t realized how much I really needed.  It also gave me the opportunity to see more of this wonderful country – a place with which I am slowly but steadily falling in love.

Another update on this past weekend’s adventure at Hell’s Gate National Park (the inspiration for the Lion King) coming soon!