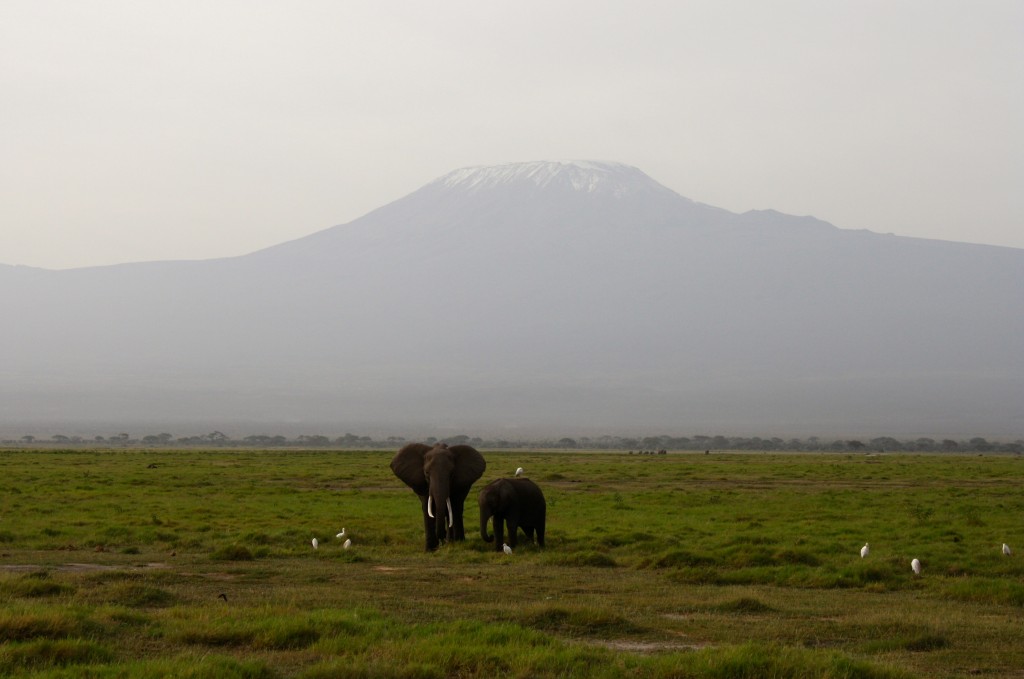 Most people don’t realize that when they picture stereotypical Africa – savannah as far as the eyes can see, giraffes picking leaves off acacia trees, majestic lions stalking antelope in the tall grass – they are actually picturing Kenya. Each year, hundreds of thousands of people head out on safaris in this country, hoping to get their quintessential East African experience. This past weekend, I decided to join them, embracing my inner tourist with a safari* to Amboseli National Park.

Unfortunately for my wallet, safaris tend to be expensive. Luckily, though, Otto just so happens to have a cousin who works for a tour company (It seems like Otto has a relative in just about every line of work) and who was willing to give us a good deal. So, bright and early on Saturday morning, my friend and I met Saidi, the famous cousin, and climbed into his 10-seater safari van. Saidi reminded me a lot of Otto – they have the same smile and some of the same mannerisms. “I could never work in an office, man,” he said, telling us about his former job selling used cars. “I had to wear a suit and tie to work every day. Here I get to wear what I want!” 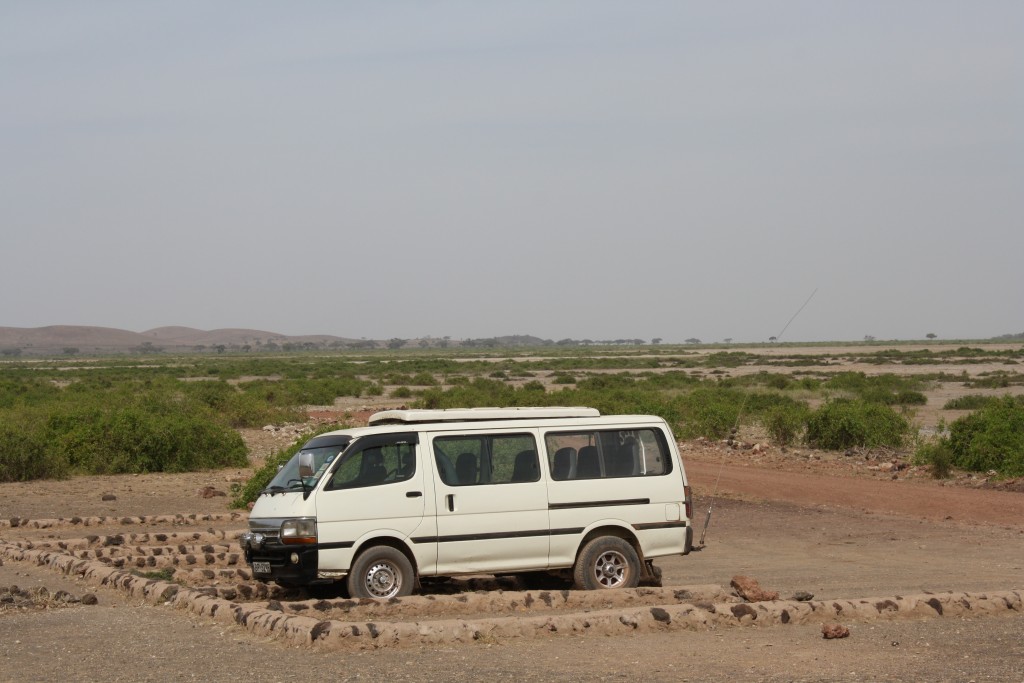 After a five-hour drive to the southern end of Kenya, we arrived at our campsite, just a kilometer or so away from the park’s main gates. The camp was a series of little wooden cabins and tents, spread out amongst the yellowed grass of the savannah. I was pretty impressed with our cabin’s amenities, which included a double bed, running water, and even a hot shower – much more than I had expected on our budget safari. Saidi was relieved that we were pleased with the accommodations: “People often get mad at me when they see it here!” he said with a laugh. I found that hard to believe – but then again, there was a safari camp with an Olympic-sized swimming pool right up the road, so I guess there’s some demand for safaris in style.

The best times for animal sightings are in the early mornings or in the late afternoon, so we had a little bit of time to kill before heading into the park. I sat on the cabin’s porch for a while, reading in the breeze. Then we ate dinner in the dining area, an open-air building with Masai blankets used as tablecloths. After our bellies were full of spaghetti and sukuma wiki, we hopped into Saidi’s van for our evening game drive. Almost immediately after entering the park, the wildlife began to appear: herds of zebras, antelopes, and wildebeest, getting in some grazing before the sun set. We also spotted baboons, dik-diks, buffalo, and more types of birds than I’ve ever seen in my life. But the highlight came when we made our way through the wetlands of the park – dozens of African elephants were wading in the water, drinking and cooling themselves off with their impressive trunks. 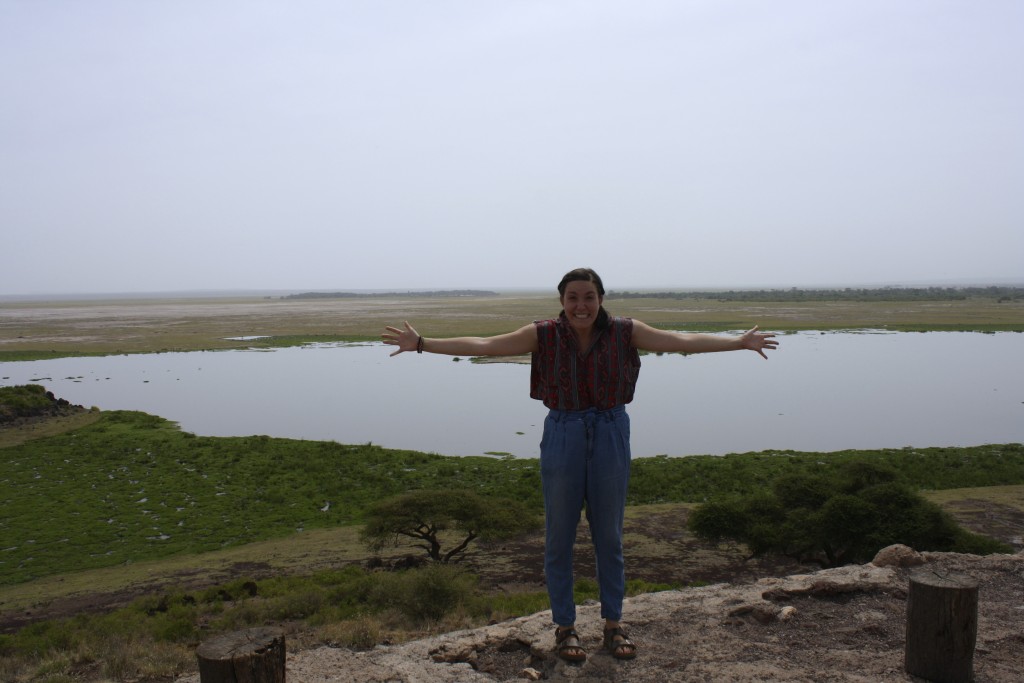 The next morning we awoke bright and early, eager to see more animals in the park. I downed a cup of terrible instant coffee to wake myself up, and we headed back towards the park. As soon as we headed out on the road, a fellow tour guide’s voice began excitedly speaking in Swahili over the radio. “A cheetah!” translated Saidi excitedly. “Oh man, we’ve gotta make it.” He stepped on the gas and we accelerated through the park gate. Only a kilometer or so into the park, we saw it – a spotted cat lounging elegantly in the shade of a bush.  We even got to see a quick burst of the cheetah’s famed running when a hyena got a little too close. It was a pretty awesome start to the day, and made getting out of bed at 5:30 worth it.

The day got even better from there. Later on, another broadcast came over the radio: “Simba! A lion!” We careened through the park at high-speed, crossing our fingers that it would still be there by the time we arrived. It was in this lion-chase that I realized just how huge Amboseli really was – our circuit the previous night had barely scratched the surface of the park’s terrain. Eventually, we reached the spot where the original sighting had occurred. “There it is!” Saidi exclaimed. My friend and I both craned our heads out of the top of the van, but were unable to see any roving lions out in the grass. But then, I saw it – a female lion, lying casually on the side of the road, less than ten feet away from our open window! She didn’t seem to mind us much, although she seemed mildly irritated that we were giving away her position to the zebra herd she had been watching.

Throughout the rest of the day we saw many more animals, even closer up than the day before. Elephants and zebras passed right in front of our van. Hippos snorted at us from the water. Ostriches pranced along in the bushes. Baboons prowled across the road. I even saw some flamingos bathing in the small lake in the middle of the park. In the afternoon, we hiked up a dirt hill offering a panoramic view of the entire park – although the hill didn’t look quite as impressive with Kilimanjaro looming behind it.

We finally headed back to Kibera, exhausted and exhilarated from the weekend and with ridiculously full memory cards. The weekend was awesome, and not just because of the various animals. In total, the whole thing only cost about $250, which was definitely worth it. I also got to make a new friend in Saidi, who I bonded with over our mutual love for Shonda Rhimes shows. (The animal sightings were pretty awesome too, though.) Now, after more than seven weeks in Kenya, I can finally say I got the quintessential safari experience – even though my campsite didn’t have a swimming pool, it was still pretty amazing.

*Technically I’d already been on a safari in the true sense of the word, since “safari” actually just means “journey” in Swahili.