Math 101: Integral Calculus with Applications to Physical Sciences and Engineering

Instructor: James Feng. His wardrobe was made up of two sweaters that he alternated throughout the semester. It was adorable. He was a fairly decent instructor; however, like many math profs he seems to forget that some people aren’t as skilled at simple arithmetic as him and tends to skip a lot of algebra when doing practice problems. He always stopped to make sure that everyone understood and to answer questions, though. Also, he was very patient and friendly during office hours, putting up with all my stupid questions. Recommended!

Textbook: Early Transcendentals by Stewart, 7th edition. If you can, try to find someone who has the textbook computer file and just have them send it to you (it’s included in the textbook/solution manual package available at the bookstore). The textbook is absolutely massive and a huge pain to lug around campus. Life is just so much easier if you can just have it on your computer, and you’ll save a ton of money. Win-win.

What I Actually Learned: Engineers aren’t as intellectually intimidating as you’d think, in spite of their fancy red jackets.

Homework/Assignments: There was an in-class quiz every Monday (I know, right, the worst) that was worth 10% of the final mark. Also, there was everyone’s favourite web-based math assignment, WebWork. Oh, WebWork, how I despise you, and not just because you were due at 6 pm on Sundays. Sometimes the answers I needed to enter were so ridiculously long (see below), and if I made the tiniest little typo it wouldn’t accept it. I think I attempted to answer one question over 40 times. The most frustrating thing ever. Having unlimited attempts was pretty sweet though, I know Math 105-ers were not as lucky. 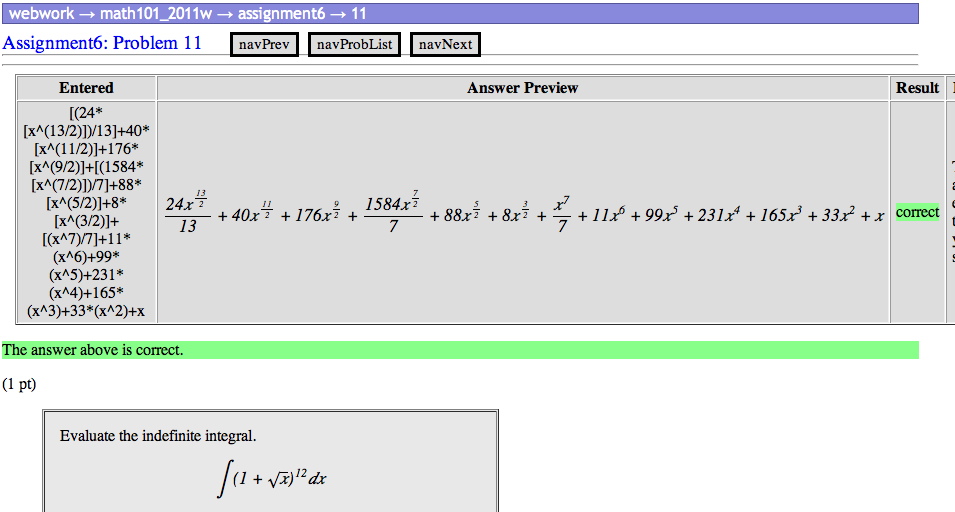 Midterms/Final: Two midterms, worth 15% each, and a 50% final. One thing I liked about Math 101 was that the practice midterms and finals they posted online were almost identical in structure and difficulty to the actual exams. The same could not be said for Math 102. As far as difficulty goes, I won’t lie, the midterms were pretty challenging. They were still fair though, no deliberate tricks or anything, and as long as you knew your stuff you could scrape a decent grade. The final, on the other hand, was freakin’ brutal. Like, attempting to swim up Niagara Falls brutal. You’ve been warned.

Comments and Tips: Typical math. If you’re willing to put in the time and effort, you’ll survive. Also, if you don’t have a solid background in integral calculus (like, say if you’re from Ontario, like yours truly), there’s no need to freak out. Just pay close attention during the first couple of weeks, go to office hours, and make sure that you understand the fundamentals. Once you understand the basic concept of an integral, everything is pretty much smooth sailing from there. The biggest tip I can give though is JOIN THE MATH 101 FACEBOOK GROUP. People would post full solutions to quiz and WebWork questions every week, it was absolutely beautiful. I owe much of my Math 103 mark to super-smart engineers’ screen shots.