Write a blog that hyper-links your research on the characters in GGRW according to the pages assigned to you. Be sure to make use of Jane Flicks’ GGRW reading notes on your reading list.

As Jane Flick asserts, the name for this character is derived from combining the names of two historical figures: Holm O. Bursum and Buffalo Bill (148). Before being appointed to Senator, Holm O. Bursum was said to be a shrewd man of business; easily sniffing out financial opportunities and often working more than one side in order to get a deal (Fernlund 434). Once appointed Senator, Holm O. Bursum proposed the Bursum Bill of May 1921 under the direction of Secretary of the Interior, Albert Fall (Philip 241). The Bill was proposed in response to disputes over land claims after the United States assumed control over New Mexico (240). Due to a lack of paperwork, land disputes were difficult to settle under U.S. laws. Therefore, the Bursum Bill proposed that “all non-Indian claims of [land] title” be upheld, while all “Indian” land claims be dismissed (240). Despite this being the 1920’s, numerous agencies, including the Indian Rights Association, protested the bill due to its discriminatory bent towards the “trespassers” and not the Indigenous people (241). In 1922, the bill was amended to state that both Indigenous and settlers who could prove continuous possession of land were entitled to the land on which they had settled. However, settlers were still given the advantage in that “Any non-Indian who could not obtain land under these provisions had the privilege of appealing to the courts and the Secretary of the Interior to make a special ruling in his favor” (242). Along with these advantages for colonialists, the revised Bursum Bill included many other provisions “detrimental to Indian interests” (242).

King portrays Bill Bursum as a stereotypical sleazy salesman who is “an asshole” to his employees and who pays them “shit” while dressing extravagantly in a “gold suit” and treating customers with “all smiles” (King 83-84). With this negative impression still fresh, the reader encounters another scene featuring Bill Bursum and a map.

In ENGL 474 with Professor Duffy Roberts, we spent a class discussing the power of names and mapping. During the process of colonization, settlers began to survey the land by dividing it up, mapping it, and naming it. In this way, colonizers dismissed and devalued previous ways of knowing and understanding the land in order to impose a method that suited their own paradigm. When King states that Bursum “spread his legs and extended his arms” while declaring that his display was a map of “Canada and the United States”, I believe King is criticizing and satirizing this process (King 127). Bill Bursum is asserting his authority and power through the medium of mapping. On page 128, King confirms this when Bursum’s character reflects on the “unifying metaphor [and] cultural impact” of the map and revels in the “power” and “control” that he will gain from it (King 128).  This scene is truncated by a question from Minnie: “Where’s Blossom?” (King 128). In this scene, King connects Bursum’s Map to colonial mapping. Just as Bursum’s Map has overshadowed Blossom, colonial mapping overwrote the lives of Canada’s First People with the stories of European colonialists.

According to most accounts, Buffalo “Cody” Bill was primarily responsible for current Hollywood representations of the “Wild West” and ideas about Indigenous culture and people. (Just do a quick Google search and numerous links, like this one, appear to confirm this).

While some argue that Buffalo Bill fought for the inclusion and respect of Indigenous peoples (link), others, like Flick, argue that this is an example of “exploit[ation] for entertainment” (Flick 148). In his Massey Lecture Series entitled “You’re Not the Indian I Had in Mind”, King tells his audience about Edward Sherriff Curtis, a photographer from the 1900s. Travelling across the United States, Curtis sought to create a photographic journal about the Indigenous people he met along the way. However, Curtis did not encounter Indigenous people in traditional regalia. He encountered “Indians who did not look as the Indian was supposed to look” (King 34). As a result, Curtis took along with him a trunk of “’Indian’ paraphernalia-wigs, blankets, painted backdrops, clothing” in order to create images of romanticized Indigenous people, as created and perpetuated by productions such as the Buffalo Bill Show (now co-opted by Walt Disney, Paris). Preserving or perpetuating these stagnant versions of Indigenous people blocks progress and prevents equality. It exploits the image of the “literary Indian” and perpetuates harmful stereotypes (King 34). 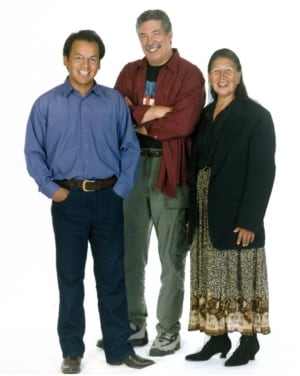 When I first encountered The Dead Dog Café restaurant in GGRW, I immediately thought it had been named after the CBC Radio Program, The Dead Dog Café Comedy Hour, hosted by none other than Thomas King himself. However, upon further research, I found that this program began in 1997, four years after the original publishing of GGRW. It is interesting to note, however, that the program featured the town (Blossom, Alberta) and the same humour and “irreverent, political” themes found in GGRW (“Dead Dog Café”).

As Flick notes in her bibliography, The Dead Dog Café is likely named as such for a number of other reasons:

As Jane Flick observes, Rose Marie is the title of a 1936 musical film depicting a love story between a Canadian Mountie, Sergeant Bruce (played by Nelson Eddy) and a young woman by the name of Marie de Flor (played by Jeanette McDonald). Together, the Americans visiting The Dead Dog Café in King’s novel are allusions to the film. Indeed, as the scene progresses, there are multiple references to the RCMP as well as to the film. Specifically, on p.133 where Nelson sings out “When I’m calling you, oo-oo-oo, oo-oo-oo!” which is a reference to what is referred to in the film as an “Indian love call” (Flick 152). Once again, as with the previous chapter, King satirizes the way that the entertainment industry consistently appropriates Indigenous culture for commercial gain.

Through Latisha’s reflections and flashbacks, King makes a subtle reference to General George Armstrong Custer, the American revolutionary war hero. According to historical records, Custer led several charges against Indigenous groups who were defending their land and rights; namely the Sioux, Lakota, and Cheyenne (link). Latisha’s memories of George from the beginning speak to his heroic reputation in the eyes of the American populace. However, as the chapter comes to a close, Latisha makes it clear that the relationship did not end well and that George was not all he first appeared to be. Symbolically, the chapter ends with Jeanette and Latisha engaging in a conversation about overflowing toilets and the overarching metaphor of water that pervades the novel.

Last, but not least, George’s suggestion that Latisha read The Prophet suggests that George Morningstar (and perhaps, by extension, Custer) was on an existential search for meaning. The book, The Prophet, offers insights and proverbs to the reader in an attempt to offer an alternative to religious texts as a source of wisdom (Amirani and Hegarty). Indeed, according to this article, Gibran “was a Christian but he saw things being done in the name of Christianity which he could not accept” (Amirani and Hegarty). The book contains reflections on life and proverbs of wisdom that transcend culture and religion, state Amirani & Hegarty. It is unclear to me whether King’s reference to the book is meant as a criticism (of Custer, Religion, Gibran, etc.) or if it is merely a reference used to back Latisha’s claim that George “wondered so much about the world because he didn’t have a clue about life” (King 134).

Through this exercise, my eyes were opened further to the depth of thought and research that King put into writing this novel. The fact that there are so many layers to the people, places, and events in the novel speaks to King’s desire to unmoor the reader from what we believe to be true and send us into uncharted space where we come to question what we “know”.