In his article, Sparke considers what Chief Justice Allan McEachern meant when he said “we’ll call it the map that roared” when he was beginning to unfold a map of Gitxsan and Wet’suwet’en territory. He explores some ideas about what this may be in reference to. The two points that stood out to be was when he suggested the phrase may be in reference to a movie or in reference to a “roaring map.”  I will now begin analyse each of these suggestions.

Sparke smartly considers that Chief Justice Allan McEachern declaring “we’ll call it the map that roared” could be in reference to the 1959 film “The Mouse that Roared” by Peter Sellers, which satirizes Cold War geopolitics. To understand why Sparke made this correlation, it is improtant to understand what the movie is about. Simplified, the movie’s plot revolves around the tiny European country called the Duchy of Grand Fenwick, whose economy is almost exclusively dependent on making wine. The country is on the verge of bankruptcy when a knockoff version of the wine is being made by an American winery. The Prime Minister decides to declare war on the United States, expecting defeat. However, by accident, the Duchy actually beats the United States. 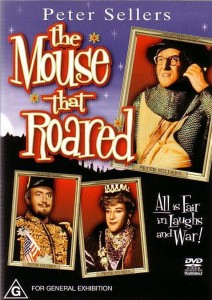 Sparke also suggests that this phrase could be referencing a roaring map that “simultaneously evoked the resistance in the First Nations’ remapping of the land.”  The Gitxsan and Wet’suwet’en people are reclaiming their land through this map and are letting Canada know that they do not agree with their classifications or how they wanted to remap it. They are being loud about it, and are showing them clearly what their beliefs are about the land, exactly how they believe it. Their cartography shows a “roaring refusal” to how Canada wished to map their land.

I think Sparke’s last reference suggestion fits best with the statement “we’ll call it the map that roared,” because it is the map that spoke out against Canadian colonialism on native land. The associations between the phrase and the movie “The Mouse that Roared” seem disrespectful and requires futuristic assumptions.