Medical Isotopes to be made at UBC!

Posted on January 26, 2011 by Kate M | Comments Off on Medical Isotopes to be made at UBC!

This week it was announced that the TRIUMF research facility at UBC will now be a new source for medical isotopes.  This has arisen due to the fact that two years ago in 2009, the nuclear facility in Chalk River, Ont. had to be shut down for a period of time for repairs. This created shortages for hospitals using these isotopes. However proton accelerators will now be used as an alternative source to prevent this situation from occurring again.

Medical isotopes are used in cancer treatment. The isotope to be created at the TRIUMF facility by its cyclotron (which is a  type of proton accelerator) is technetium-99m.  This isotope is used as a radioactive tracer by medical equipment for imaging the human body.   To create this isotope or any new material by proton accelerators, protons are accelerated into an initial material and enter the nuclei. The added protons now change the initial material into something else.  The TRIUMF website gives a specific and well diagrammed explanation on how technetium-99m will be created here at UBC.

UBC will not be alone in using its accelerator for isotope production. It was also announced in the Vancouver Sun that there will be two more facilities in Toronto. Also a fourth proton accelerator at the University of Saskatchewan called the Synchrotron will be used as well. 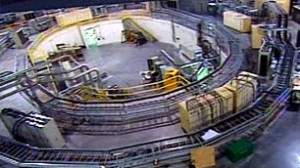 Synchrotron as the Uni. of SASK (CBC)

There are many pros to now using proton accelerators in this manner. There is less radioactive waste generated compared to when isotopes are produced by a nuclear reactor. Also these isotopes can be created by smaller, lower energy facilities. Canada will also have four sources rather then just one so if there is an issues at one facility there will be other sources.  Metro Vancouver will soon be self-sufficient in its demand for these isotopes once the TRIUMF facility is fully producing it’s medical isotopes.

It is exciting to find another use for proton accelerators and for UBC to be leading in this new form of research and production. More information on TRIUMF’s endeavors can be found on their website.