One of the most prominent species in the Arctic is a medium sized toothed whale known as the narwhal. Narwhal’s male have a long straight tusk, a canine tooth, projecting from the left side of the upper jaw and reaches till about 3m in length. Since the beginning of their discovery, scientists have been hard at work to figure out the use of these “horns”. 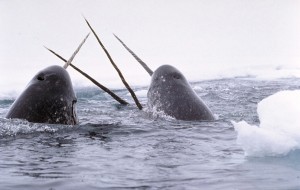 Some researchers have suggested that the tusks in male narwhals merely plays a role to attract the females. We’ve seen this kind of phenomenon in other animals as well, such as male peacocks displaying their tail as a hint of availability to the peahens.

While others have proposed that the 9ft. tusk acts like an antenna containing sensory neurons that can sense the salt concentrations of the water, helping the whales navigate food or location.
The elongated tooth is connected to a base layer inside the mouth known as dentin. This layer contains small pores that run to the innermost part and contain blood vessels and nerves. These nerves run from the tusk all the way to the brain, thus, maintaining  a direct connection from the outside to the inside stimuli of the whale. Some researchers speculated that these nerves help the whales distinguish the different salinities of the water, which correlated with the changes in heartbeat of the narwhals. But due to the lack of evidence, this theory hasn’t yet been fully supported yet.

These tusks might have multiple functions associated with it, but biologists and scientists are still hard at work to determine one major role of it. 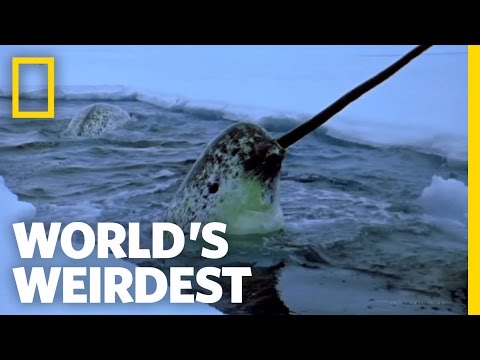 One response to “Arctic Unicorns”