Scientists have discovered that they can detect criminal tendencies by looking at the MRI brain scans. According to Dr. Adrian Raine, a British criminologist, the origins of crime and antisocial behavior can be found in children as young as only three-years old. Psychopaths have physically different brains from “normal” people; in other words, they may be “born to kill.” 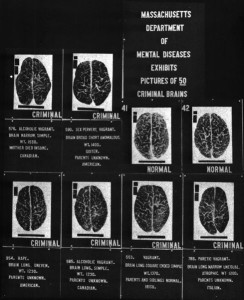 Studies have shown that in the MRI brain scans of criminals, they had approximately 11% less grey matter in the anterior rostral prefrontal cortex and amygdala than in the brains of non-psychopaths. Grey matter of the brain is important for understanding people’s emotions and is associated with behavior, guilt, remorse, and empathy. People who lack grey matter might have no sense of regret or loss of emotions. 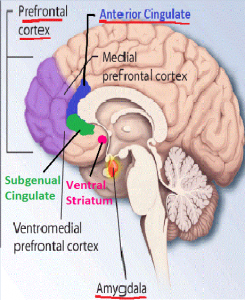 In one study, three-year olds were measured for their response to fear. These children were given a stimulus and then a small electrical shock. Involuntary physical impulses were then measured when children were presented with the same stimulus, minus the shock. Children who would later grow up to become criminals showed a distinct lack of fear when presented with the stimulus in comparison to other children.

Correlations have been shown between callousness and crime. Nathalie Fontaine, a criminologist studying the brains of the children between the ages of seven and twelve, found that children who tend to be insensitive and unemotional are at greater risk of becoming criminals than children with typical emotions.

While the criminal brain tends to be physiologically different than that of the law-abiding citizen, hope is not lost. By identifying possible criminal behavior earlier on in life, we can minimize further escalation of such behaviors. For these children, positive reinforcement is important. On the other hand, taking food and medicine rich in omega-3 fatty acids can counteract behavioral problems. A study showed that by taking omega-3 and multi-vitamin/mineral, behaviors of inattention, hyperactivity, and impulsivity significantly reduces.

Criminal behavior is certainly not a fixed behavior. As the studies of three-year-olds and other research have shown, many of these brain abnormalities can be measured early on in life. By identifying these types of antisocial behavior of a child, proper approaches can be made before an individual might develop into actual psychopathic tendencies or commit a crime.

The following video, “A Killer’s Brain: Scans Look for Clues to Violence,” shows Dr. Raine’s study of how study of brain scans can detect future criminals:

Posted in Issues in science, Science in the news