Here’s a strange thought: You, and all the people you know, were once microscopic bundles of cells, inside of another person’s body (in your case, your mother’s).  You may be all sorts of awesome now, but your life began extremely humbly – an elegant balance of symmetry, simplicity, and chaotic potential.  And it all started inside of an egg. You, like me, are an egg person. Deal with it. 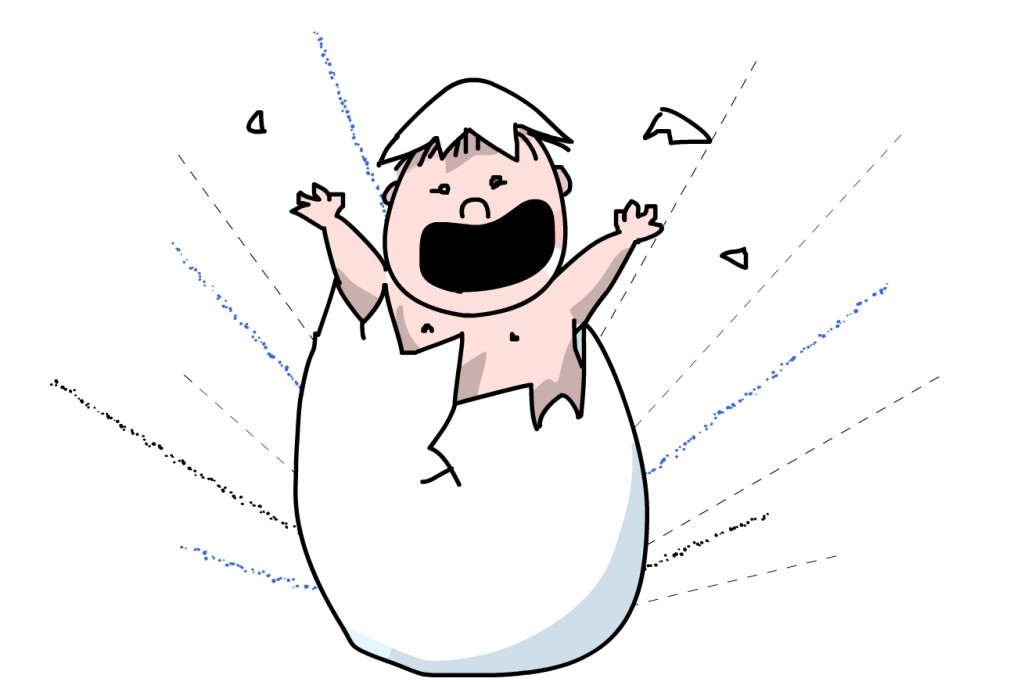 Eggs are beautiful things. They are such an elegant solution to developing new life, that multiple taxa of animals have evolved to produce them, including fish, amphibians, birds, dinosaurs, reptiles and mammals.  For most fish and amphibians, the laying of eggs is the first step in the process of sexual reproduction.  The eggs are then fertilized by the male in water, where they remain until they develop and eventually hatch.

It’s a neat system, but not one that works very well for terrestrial (earth-living) animals like birds, reptiles and mammals. Developing embryos is a delicate business; they need to be kept moist, sheltered, at a relatively stable temperature, and with a steady supply of nutrients. These are all tall orders for any organism to maintain, let alone a defenseless embryo outside of water.

As it so happens, the safest place for many animals to grow their young is inside of their own bodies.

Humans, as I’m sure you know, don’t lay eggs.  Instead, we retain our eggs, fertilize, and develop them internally; the type of egg we make defines us as Amniotes, along with reptiles and birds.  Amniotic animals have more complex eggs then fish and amphibians, as they have specialized membranes that grow out of the embryo, and preform multiple functions, including providing the growing fetus with nutrients.

Birds grow their eggs internally for a short period of time, then lay them, and then incubate (keep them warm while they develop).  Inside, the  bird embryos are supplied with nutrients from a yolk sac, which supports them as they grow.  Gas exchange also occurs through the membranes and pores of the shell (yes, eggs breathe!).

While many reptiles lay eggs, there are several species of snakes and lizards that give live birth; some snakes even have placentas.  Placentas are something that also define placental mammals – a group to which humans belong.

In placental animals, the membranes of the amniotic egg develop into the placenta and umbilical cord.  Considered in this way, a placenta is essentially a modified egg, and has many analogous features that can be compared to reptile and bird eggs (a couple of which are illustrated below).  Instead of a yolk sac, human fetuses get their nutrients from their mother’s body via the placenta and umbilical cord.

The placenta acts as a bridge between the mother’s body and the growing child’s – allowing the transport of nutrients, but also acting as a barricade against the mother’s immune system (which will naturally want to treat the baby as a hostile “foreign” life-form inside the mother). 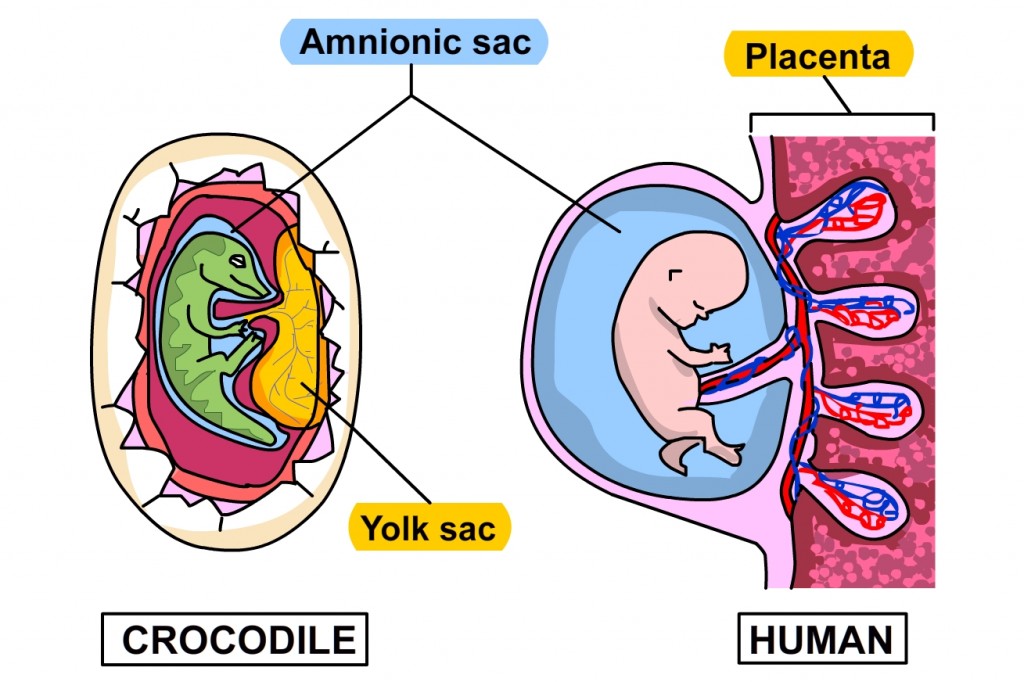 There is considerable evidence that live birth has evolved hundreds times, within a diverse spectrum of animal forms – it is certainly not unique to mammals.  The earliest evidence for live birth dates back 380 million years, to the ancient armored fishes the placoderms. 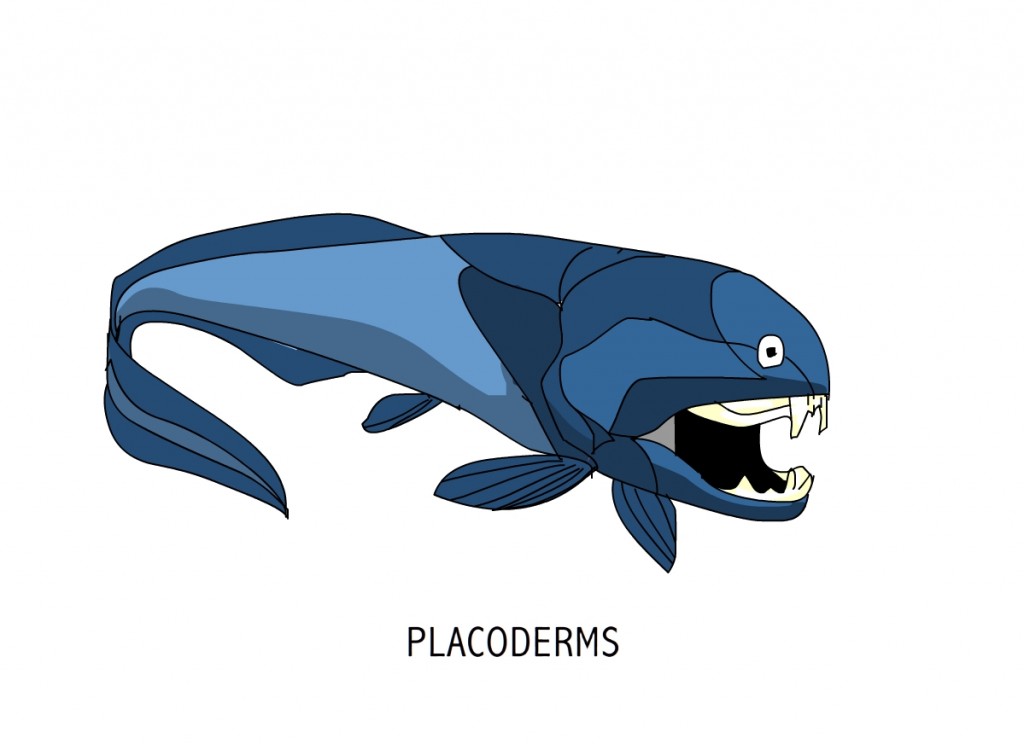 This tells us something interesting about the nature of live birth from an evolutionary perspective – that the difference between live birthing-mammals and egg-laying mammals is not cut and dry (as nothing ever is in evolutionary biology).  Rather, the two methods of developing young have dozens of crossovers and grey areas, and in a more fundamental way, they are really the same thing. For nature, the egg has never truly gone out of style.

Text and illustrations by Sam MacKinnon, 2014

Porous Science: How Does a Developing Chick Breathe Inside Its Egg? 2012 Scientific American.  Retrieved on 02/24/2014 from: http://www.scientificamerican.com/article/bring-science-home-chick-breathe-inside-shell/