Why use herbicides to kill invasive marsh reed, use herbivores. 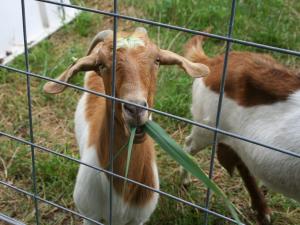 The Phragmites australis is an invasive reed that is rapidly colonizing in the East Coast salt marshes recently. The growth of invasive reeds is at very fast rate, which kills native grass by over competing resources, and changes the function of marsh. So how can we reduce the abundance and distribution of Phragmites and sustain native environment?

Brian R. Silliman, Rachel Carson associate professor of marine conservation biology at Duke University, experimented on herbicides, and herbivores such as goats, cows, and horses (livestock) to discover which is more effective on reducing abundance of invasive marsh reeds. He found that controlled grazing herbivores was much more effective than using herbicides to kill the reeds. 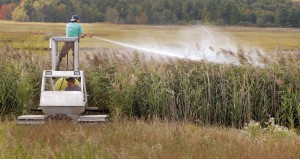 Silliman’s team randomly choose 4 goats and place them in 8.5m X 4m wire fenced box at Phragmites dominated freshwater marsh in the Beltsville Agricultural Research Centre in Beltsville, Maryland, USA. According to his study, goats were excellent livestock that can suppress the growth of Phragmites significantly. The goats reduced stem density by ~50%, stem height by ~60%, and percentage cover from 94% to 21% in 2~4 weeks. This remarkable results suggested that controlled grazing of goats, cows, horses, and other livestock will sustain the native species diversity by effectively reduce the invasive species and allow native species to re-establish.

The video below explain the problem with Phragmites