From the Kitchen Straight to Your Fuel Tank: How BioFuel Can Save You Money

Have you ever wondered if it’s possible to fill up your car tanks with waste by-products? To use the organic waste that you and your family produce to power your commute to work?  Well now with the new 2015 Chevrolet Impala, the wait is over! But as Doc talks about in the video below, it’s a little more complicated than just throwing your organic waste in the tank and driving off.

Instead of using waste directly, the Impala runs on biofuel. This revolutionary source of energy comes from the methane that microorganisms emit after they breaking down organic waste material in oxygen depleted environments via anaerobic metabolism.

This biofuel, also known as Renewable compressed natural gas (CNG), is made from recycled waste and has several key advantages. First off, CNG is produced through anaerobic digestion. This process uses far less energy than conventional methods of natural gas production, where natural gas is extracted from deep within the Earth and transported to refineries to be processed. Furthermore, production of CNG also allows us to sidetrack waste from landfills and incinerators that pollute air, soil and water  hence, protecting our environment. The benefits to our environment do not end there! According to the California Air Resources Board vehicles running on natural gas have also been found to emit 20% fewer greenhouse gases than gasoline powered vehicles.  In addition to all of this, CNG is approximately $1.00 per gallon cheaper than gasoline. With an average mid-sized car having a 16 gallon tank, that could save you a lot of money!

Alas, all that glitters is not always gold. Despite having clear advantages, there are some downsides to using natural gas as well. CNG latter is not as dense as gasoline and given equal amounts of both, will provide less energy.  The consequence of this is that the vehicle will have less power and drive fewer miles on natural gas. Additionally, there are only 769 natural gas fuelling stations in the United States compared to 168, 000 gas stations nationwide. This could pose potential problems that like to go on long road trips. But where there is a will there is always a way. The 2015 Chevrolet Impala Bi-fuel, can drive 150 miles on CNG, after which it automatically switches to being powered by gasoline. There is also a button that allows you to switch between the two fuel systems. Below are a few pictures of this revolutionary new vehicle. 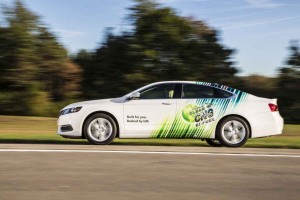 Driver’s can switch between the two fuel sources, CNG and Gasoline by pressing the “CNG” button to the left of the steering wheel on 2015 Chevrolet Impala Bi-fuel (Image Source: Chevrolet)

As the world’s fossil fuel resources are being depleted and expected to run out in the next 60 to 90 years, CNG and other biofuels are clearly a great solution to this problem. Despite having some minor drawbacks, as we see in the video shown below by cngnow, natural gas is clearly much safer for us, the environment, and our wallets!

This entry was posted in Issues in Science, Public Engagement, Science in the News and tagged Air Resources Board, Chevrolet Impala, Compressed Natural Gas, Gasoline. Bookmark the permalink.