Who’s this stranger starring at me?

Can you imagine if one normal day, as you are getting ready to leave the house, you take a glance at yourself in the mirror and see a complete stranger? That person looks just likes you, speaks the same way you do and has done the same activities in life as you have. The only problem is, you do not realize the fact that you are looking at your own mirror image because the person you see is an unknown intruder.

By State Library of New South Wales collection [No restrictions], via Wikimedia Commons

A similar situation happened to an elderly man in France who could not recognize himself in the mirror and started conversing with the stranger he saw replacing his reflection. After his daughter took him to the hospital, doctors diagnosed this man with a rare condition called Atypical Capgras syndrome. While in the typical case of this syndrome, patients think that a family member or a friend has been replaced with an identical impostor, in the atypical case the patients’ delusions concern his own self.

According to neurologists and psychiatrists, people who have this disease have impairments in two separate brain pathways. The overt pathway or direct pathway is impaired, prohibiting the patient from recognizing faces but allowing them to show emotion towards a particular face, and the covert pathway is impaired, where even though patients can identify a familiar face, they show no signs of familiarity related to that face. The Atypical Capgras syndrome causes patients to recognize themselves as strangers. The Youtube video below shows an actual case of the typical Capgras disease. 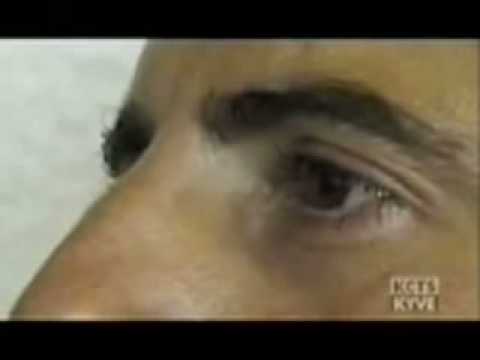 People who suffer from this disease can be helped by certain anti-psychotic medications. Due to the rareness of this disease further investigations on methods and drugs that can cure it are currently taking place.

All in all, apart from our brain being a miraculous organ capable of receiving, organizing and distributing information to make our bodies function properly, it can also work in reverse, preventing us from recognizing our own mirror reflections. So next time you look at yourself in the mirror, be grateful that you recognize that awesome person standing right in front of you because some have to face a scary reality where they start to question their own identity.

7 responses to “Who’s this stranger starring at me?”