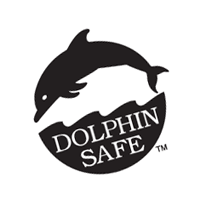 Although this label might lead you to think you’re making a sustainable choice, that is not necessarily the case. The widely used Dolphin-safe Tuna seal, has recently stirred up quite a bit of controversy over whether or not it promotes good fishing practices.

Tuna in the Eastern Tropical Pacific Ocean are often accompanied by schools dolphins looking for a meal. Because dolphins swim closer to the surface, often will chase dolphins in order to find tuna. Then when fisherman cast large nets out, they catch the dolphins as well as the tuna, resulting in death or injury to the dolphins.  In order to lessen dolphin by-catch, boats must conduct a “backdown operation” in which the boat lowers the net before pulling it out to let dolphins escape, or long-line fishing must be used.

Canned tuna in the US that has the dolphin-safe certification seal is said to have been fished using the following regulations (1):

Although canned tuna cannot be sold in the US if it dolphins were chased, or encircled, and killed during the fishing process, canned tuna that has been caught by chasing and encircling dolphins can still be sold in the US, without the dolphin-safe label (2). So, one could see the merit it wanting to ensure the tuna you eat is not fished by encircling and chasing dolphins and that there is someone enforcing the rule that no dolphins were killed on a vessel.

However, there are several issues with the certification that make it a bit of a red-herring.

Firstly, it fails to recognize that although “backdown operations” and long-lining reduce the bycatch of dolphins, many other types of marine life killed or injured en masse using these techniques. These include turtles, sharks, sea birds and other fish.

Sea turtles hooked on a longline as a result of bycatch. Credit: http://www.worldfishing.net/news101/industry-news/longline-bycatch-restricted-to-17-loggerheads

Secondly, only tuna fished in the Eastern Tropical Pacific Ocean are found swimming near dolphins, but tuna caught elsewhere can still don the dolphin-safe logo.  The vast majority of tuna fishing is not done in the ETP, however, so dolphins would not be harmed in the first place (2).

In addition, the seal also fails to recognize the negative effects of large-scale tuna fishing on the total stocks of tuna populations. Bluefin tuna populations, for example, have fallen 85% since industrial fishing began according to Sea Shepard (3).

In the end, the dolphin-safe label is an example that shows that you can’t solely rely on ‘green’ seals of sustainability to guide purchases. Educating yourself on the certifications out there is essential to make sustainable buying choices.