As you may or may not know, I’m a biology student with a specific interest in genetics. A topic I’ve always found fascinating is genetic drift, a component of evolution, so I thought I’d share it with you all.

The criteria of this assignment is to write 3 definitions of a relatively complex term: parenthetical, sentence, and expanded definition.

Genetic drift is a mechanism of evolution that increases the likelihood of certain organisms passing on their genes due to chance.

Genetic drift is a form of evolution. It causes changes in species’ gene pool due to random chance.

How does it work and what does it look like?

Imagine a population of 10 aliens. Let’s say half of them are blue and half of them are pink. One day, 3 pink aliens decide to take a road trip and leave town. Now, all the aliens that remain in town are 5 blue ones and 2 pink ones. When the 3 pink aliens return from their trip, they find that a freak storm left the town devastated and all its inhabitants dead. Now, all that’s left in that town’s gene pool are pink aliens. So due to random chance those 3 individuals now are more likely to produce offspring and pass down their pink genes to them.  This is genetic drift. 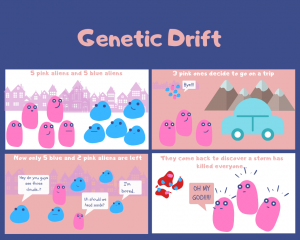 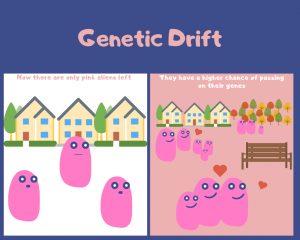 What’s needed to make it occur

Genetic drift usually requires some sort of natural event or disaster to affect the population.

What Genetic Drift is Not

Genetic drift is not the same as natural selection. Natural selection is when certain characteristics increase an organisms chance of passing on their genes. There is no “luck” or random chance involved here. Their heritable characteristics are what defines their ability to affect the gene pool. But in genetic drift, the likelihood of an organism passing on their genes is due to random chance.